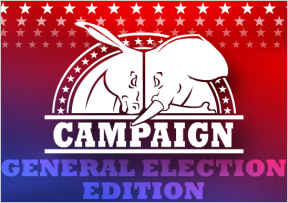 Here in the US, the quadrennial slugfest commonly known as the presidential election drives a sharp wedge through the population, splitting it into two rival factions, each one stubborn, angry, and completely unwilling to listen to what the other has to say.

No, I'm not talking about Republicrats and Democans. I refer, of course, to the PPPs and the EEEs: the Purveyors of Political Punditry and the Election Ennui Endurers. You know who I'm talking about. PPPs thrive on the election process, blanketing their fender with bumper stickers, spouting the marvels of their preferred candidate and the evils of the other guy, and constantly checking their favorite websites for the latest election buzz. EEEs on the other hand have only one concern about the election: how long until it all goes away?

With two factions so completely polarized (and trust me, there is no chance of even imagining the concept of the idea of the thought of the possibility of there being anyone who falls somewhere in between the EEEs and the PPPs. Any rumors you might have heard of the Intermediately Interested Independents are completely untrue.), there's no way an election-themed game could appeal to both camps, right?

Wrong! Yeaaagh! Say hello to Campaign, a mud-slinging, fact-spinning, smashmouth brawl of a turn-based strategy game where victory is achieved only through beating your opponent into submission. Diplomatically, of course.

Campaign can be played either against the computer (single player) or against a live foe (multiplayer). To begin, simply choose either the red guy or the blue guy – it doesn't really matter who, as the differences are minimal. You'll then be asked to choose 3 staff members. Choose from among Spinmeisters, Hatchet Men, Fundraisers, and Operatives, each of whom have their own strengths and weaknesses. Once you've gotten the staff you want, the game begins! Your team is plunked down on a tiled version of the US that's been split up into seven regions. There are a number of starting configurations possible, but the game randomly chooses one for you (they're all pretty even), and you'll just have to deal with it.

Each character has two possible actions: move and attack. When you move somewhere within disputed territory, your character will claim some surrounding squares for your party. Claiming all squares in a region captures that region for your party, enabling it to earn money for your campaign and preventing your opponent from even setting foot inside its border. However, your hold on the region is not invincible – your ruthless opponent may attack the region itself, weakening its strength until it becomes disputed territory once again.

Each unit has a free basic attack and an advanced move which costs money. The candidates themselves have several advanced moves, including one that is unique to that particular candidate (the only actual difference between blue and red). These special moves help to strike a nice balance of options available to the player, including both ranged and melee attacks, healing powers, stealth, bonus damage and defense, and the ability to spread out attacks or concentrate them on one unit or region. The game ends when one candidate's health reaches zero, which means that it is possible to win without necessarily having an advantage in captured regions or healthy staff members.

Analysis: Like I mentioned before, the beauty of Campaign is wrapped up in its ability to appeal both to PPPs and EEEs. Election junkies will get a kick out of plotting the ascent of their favorite candidate (and the demise of that no-good other guy). At the same time, people who are sick and tired of seeing slanted news reports, dirty smear tactics, and meaningless patriotic posing can appreciate the satirical manner in which these campaign tactics are presented, from the quite literal mud-slinging attack to the healing cash infusions and the ridiculously propagandist attack ads. Campaign distorts these distortions to present them for what they truly are: empty ploys to sway voter opinion. In the process, it lifts itself above politics like few politically-themed games ever have, allowing the player to appreciate the underlying game mechanics.

Of course, it helps that the mechanics are actually very good in and of themselves. "Well-balanced" sums Campaign up pretty well. Despite not being perfectly symmetric, the gameplay is so fluid that smart maneuvering will quickly wipe out any slight advantage one side may have. Allowing the player to customize their staff adds another layer of complexity, but it's hard to argue than any one staff type is stronger or weaker than the others. They're just... different. There's also great balance in choosing whether to attack units or regions – each strategy can at some point be the superior choice. Finally, like chess, winning the small battles is important, but inconsequential if you can't protect your head honcho. Even someone at a territorial or numerical disadvantage can still pull out victory by exploiting their opponent's carelessness – I was able to eke out victory once by trapping the opposing candidate with my units and a captured territory of mine.

Cheers to P.Lord for sending this one in! =)

I liked this game when i first played it about a month ago - but found it rather hard to win. Not unfairly hard though.

Played it forever ago. Good game but kinda hard.

Nice game and all. Liked it better when it had all six candidates.

Did anyone else notice that (With the III) that if you were to had them up there was the P.I.E.?

I can't get it to work.
It just goes through a constant loop of the opening animation.

This game would be more fun with all the old candidates. But overall, a very entertaining game. More options for staff would make it much more interesting.

Wow, this game is addictive! I just played it 3 times in a row (lost the first one, won the others)!

HELP!!! I am having the same problem as Diego, the opening screen just keeps on looping. I would like to play this is something wrong with my computer or is the game just broken

I'm not seeing the same thing. The title screen appears with a menu including: Multiplayer, Singleplayer, and Instructions.

I played this game a long time ago, when there were multiple candidates (Hillary, Edwards, Romney, etc.), but I finally have figured out how to increase my chances of winning!

Just keep attacking the leading opponent!! (McCain if you're Obama, or Obama if you're McCain)

Please register to vote if you are in the US.

I keep getting a constant loop of the opening animation too! And I've played this game before and it had worked fine then. :(

That strategy works well against the computer, but is a lot less effective against a player who knows what he's doing.

It still refuses to work. I get the same loop, and my adobe is as updated it can get.