Ready to die just a little bit more? Then you're ready for Cardinal Quest 2, the turn-based roguelike sequel to 2012's Cardinal Quest, brought to you by randomnine (maker of Fear is Vigilance and a consultant on the original Cardinal Quest game). You'll recognize the great pixel art and the procedurally generated maps of the first game, and appreciate the new complexity. The new game, now available for iOS (with Android and PC/Mac/Linux versions on the way), has six characters to choose from and three levels of difficulty. You start with the fighter, but gain morale along the way—the one thing you take with you when you die. Because you will die, my friend. You will die often and sometimes unexpectedly. 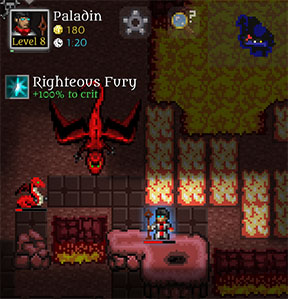 When you come back after all those deaths, you have nothing but the original clothes on your back, a few basic items, and all that morale. If you exit all the way to the main menu after you die and start a new game, you will have the option to unlock one of the new characters which include the thief and wizard from the first game, as well as a ranger, a pugilist and a paladin. Choose your gender and skin tone and, if there is enough morale left, purchase some additional perks—battle abilities you can take into your next iteration. Each time you enter the map you'll enter something similar to the map you had before. They aren't identical, and they are shrouded in a "fog of war", so exploration is the key. This version has added an expansion map in the upper right corner which helps you stay on track with your exploration. What you can count on from one new life to the next is what you've learned from past maps, such as what kind of enemies you'll be facing and what they can do to you, or how to find cover.

Move by tapping or swiping on the screen, and attack by tapping your enemy (although if you have big fingers, tapping or holding a space just past an enemy is equally successful, but be prepared to move to that space when your opponent is defeated). Inventory and ability spaces are limited, so there is no point in hoarding anything other than, perhaps, healing potions. And if you bump into the little shopkeeper, you might find he has just what you need to finish the level you're on.

Everything is tiny, so careful tapping is in order, but in most cases you'll find that you aren't stuck with something you have clicked on by accident (with the exception of inventory items and skill points inside the game. Generally, you either have an "Unlock" or "Buy" button that is separated from the item you've clicked, or you can make changes before committing to a choice. As you level up, you'll assign points to your character's skill tree, and each move to a new map heals you completely. You don't have to finish an entire map before you escape to the next level, and sometimes you don't have any other choice, but clearing a level improves your morale, fills your pockets, and sometimes uncovers an enemy you haven't met before. Besides, death is waiting, so grab this game now and let the perishing begin!

I played a little and I had a lot of fun