Catchy Orbit is one of those one-button puzzle games which are quite simple and yet strangely addictive. Maybe it's because it makes things go boom. In space. With giant globes of apocalypse. In other words, your task is to press the [spacebar] or click anywhere on the screen to launch one or more balls into other balls (planets?) and try to get a chain reaction going. The number of destroyed balls determines how many stars you'll get, and you'll need at least one to pass a level. 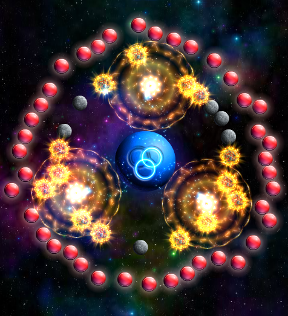 The game starts easily enough, so you can work on your timing and get it just right before the difficulty increases. At the beginning, you can only launch normal balls, and later you'll get three other types, which means you'll have to adjust your tactics for maximum impact. It's never very hard to finish a level, but getting all three stars requires some skill, especially when you have to destroy rocks as well as balls in order to proceed. Some levels change their layout every time you restart them, which means zero frustration if you get stuck the first time, but it also means you can't replay the exact same level if you're of a stubborn disposition and intent on beating it. But this is a minor complaint; overall, Catchy Orbit is a polished game with very nice mechanics, clear visuals and cool music. Add to that a few nice achievements, and you've got yourself an explosion-filled, addictive little time stealer.

By level 23 with needing 20 rocks, you may as well quit because it's no more engaging than roulette or rolling dice and there's no strategy involved.

This is so much fun (in a boomshine sort of way). There is some luck involved, yes, but if I can't beat a screen, I just reset the level. I think the changing screen layout adds a lot of replay value. The difficulty increases fairly and evenly; no huge jump from one level to the next.
Bonus: you can go back and replay a level to try to get more stars.

With the randomly generated layouts, some levels are unwinnable. Too much luck and not enough strategy.