Cate West - The Vanishing Files is a hidden object game, from developer Gamenauts, that strays as far as it can from the genre without turning into a minigame-focused mystery adventure. In addition to your usual "find all the objects on the list" gameplay, Cate West weaves a number of evidence-related games that keep the pointing and clicking from getting stale. Paired with stellar artwork and an interesting storyline, the final result is something that provides the charm of a hidden object game with new experiences and lighter, more engaging gameplay. 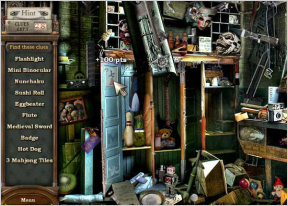 Cate West is an author with a unique psychic ability: she can see places, people and things associated with an item simply by touching it. Working with the police you will investigate 15 full cases, each divided into sub-games that follow the same overall outline. Cases begin with hidden object scenes where Cate searches cluttered locations for clues. The item finding mechanics here are simple: just look at the list and search the image for the objects. You don't have to find all of the items, which is a huge relief, and hints slowly regenerate after each use (though points will be deducted and you may not see the game's best ending).

After clues have been gathered, Cate pinpoints items with strong associations to the criminal for use in the trial. In a slight variation of the hidden object theme, these items are broken into pieces and you must find every part to assemble it. Next, Cate searches for the criminal's hideout by matching a photograph with her mental image, prompting a spot-the-difference minigame. This narrows the location down to a single street where a handful of suspects are rounded up and placed before your eyes. Each profile photo has some basic information about the suspect that you'll compare against Cate's impressions from the evidence, slowly narrowing the choices down to a few. Then it's time to make your arrest. 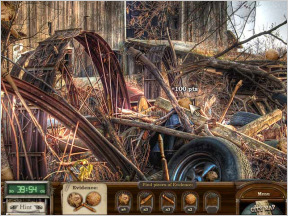 In court, the suspect gives his or her testimony which begins a fun spot-the-difference/hidden object mash-up game. Instead of looking for items or differences, however, you're given an inventory of items and must place them on photographs of the scene, making sure the left side matches the right. Justice has been served, and it's time to move on to the next case!

Analysis: Games with this sort of mystery-laden atmosphere have always been a draw for me, but I was hesitant to dive into Cate West - The Vanishing Files simply because I didn't want to play another hidden object game. I was very pleasantly surprised, however, at how light this game is on the item finding. Sure, it's still the center of the show, but mixing in the various evidence games really breaks up the monotony and ends up being a lot of fun.

Even though it's a lighter take on the hidden object genre, Cate West suffers from becoming formulaic in its own right. It's a rather lengthy game for a casual title, with 15 cases and almost twice as many locations to visit, but with the same few games repeating over and over it feels a little stale by the end. Fortunately the story is interesting enough to encourage you to forge ahead. Also worth mentioning are the stunning locations and art direction in Cate West - The Vanishing Files. The dialogue-driven cut scenes have an almost manga-style feel, and when you reach a new area you just want to drink in the detail.

It's enough item finding to appease hidden object fans, yet Cate West - The Vanishing files is so much more. It's a carefully crafted blend of experiences that gets just about everything right.

The plot stretched my credulity a lot. But especially I wondered why no one did anything about those poor people who were mind-controlled into committing the crimes. I mean in the game, you lock them all up and that's the end of that. "Not guilty by reason of mind-controlling madman" may not be part of the American legal system, but I felt like the game glossed over this aspect. "Please try not to notice that you are putting 14 people in jail for crimes that they were not responsible for." Especially since after every case someone says "Yeah! the criminal is behind bars."

There was a lot of gameplay repetition but I was pleasantly surprised at how many different settings there were. The artwork is beautiful.

I <3 hidden object games! This one is very good with so much variety and I love the mystery of it. A great pick!

This is all the comments on this game? I suppose yet-another-hidden-item-game can be easily looked over. Truth be told, I almost did.

Predictable plot (i TOTALLY saw the end coming), but it's about the journey anyway.

I agree, the graphics are beautiful (especially the manga/rpg look for dialogue). Short or no vocals during convos. So if you like to skip those, you can just click away without having to wait for the vocals to finish.

There are multiple endings based on your score. And I'm not going to replay the game to see what the other ones are =) I noticed the preset hiscore (under More Features) with characters from the game, and I believe the different endings are based off of those.

You get 200pts Speed Bonus per item found in under 1sec (maybe 2sec?). So first, without clicking, locate items on the list, and THEN click, click, click! If done right in a 10-item location, you get a 1,800pt bonus for that location (weird math? cuz the 1st one doesn't count).

I smell a sequel (of course). There are "others" yet to be introduced, and folks who are suppose to be dead aren't dead.
Classic.

I found it moderately fun, but way overpriced at $20. After having played thru a few chapters, I might consider paying up to $10... but that's all.

Just started playing this game this morning...and I have to admit, it's got me hooked...pretty much just for the story line and the anime/manga feel to the cut scenes. Can't wait to find out what happens

I really enjoyed this game... Is there any way to know the other endings since I don't want to play it all over again . :)

My favorite of the point and clicks I have played so far. I'm bummed that I've paid $19.99 for other games that didn't last nearly as long as this one. Beautiful artwork.

So I just bought this game, and got through the 5th chapter and now the game malfunctions when it tries to go past that point. Anyone else have that problem or suggestions on how to fix the problem?? Waste of money if I can't play the game with no way of a refund.

Christina - there is always a way to a refund.

(For more efficient communication, please send us a note using the contact email address found at the bottom of this page.)

I love Cate West, The Vanishing Files! I got the game for Christmas, and I finished it in 3 days! I command the creators to make a second game and send it to game stores worldwide! I need to figure out who killed Cate's father! If you don't enable my addiction to play that game, I... I don't know what I'm going to do... But I'm going to do it! Please!