Hieronymus Bosch was an Early Dutch Renaissance painter, and that's pretty much all we know about him. Apart from the fact that he was a weirdo, because his paintings are some of the most insane things you'll ever see. Don't believe me? Google him, I dare you. So, when creating a Bosch-themed game, We Are Muesli decided to make it a hallucination-filled, transcendental, multimedial, interactive-arty visual-novely experience. It was only fitting. 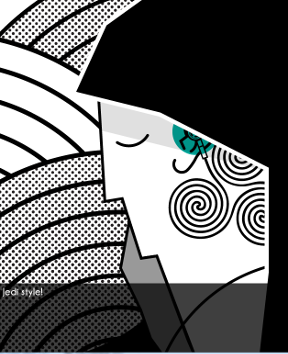 Now, there's this geeky teenager who goes by the name of Hoodie and is interested by Bosch. He gets lost in a Lisbon museum which holds Bosch's trippy Triptych of the Temptation of St. Anthony. While sitting in front of it, he is approached by a mysterious stranger who, like all good strangers, offers him candy. And by candy I mean two objects which will, depending on Hoodie's choice, take him to different, but equally unbelievable places. Therefore, you'll probably want to play the game twice, because both paths are well worth exploring (and also quite short). One of them will acquaint you with aspects of medieval life in a Q&A type of gameplay; the other will teach you about human depravity by asking you to search through the triptych and its wealth of impressive (and disturbing) symbolic figures. This, combined with the extreme minimalism of the game's graphics and the slightly unhinged music, makes for a thoroughly unusual experience, one which is at the same time about art, history, life choices and whatever else you read into it.

What you will take away from this game is largely up to you. The interpretation of art is a personal affair, and CAVE! CAVE! DEUS VIDET. doesn't want to nudge you in any particular direction, but simply to point out things you may not have noticed or known about. If you happen to like Bosch, this will be a very rare treat; if not, you might finish the game blinking at the screen and scratching your head. Either way, something will stay with you, something new and perhaps a bit unsettling, but something that could make you think and feel. And that's what art is all about.


If you choose the ball (right hand)

If you choose the triangular object (left hand)
Questions

"Error (509)
This account's public links are generating too much traffic and have been temporarily disabled!"

@ dsrtrosy
Wow, didn't think that would happen! Here's the link to the game page with Mediafire mirrors, those should work:

Yep, sorry for the inconvenience but Dropbox links seem to be down for too much traffic (thank you all by the way ;)
Mediafire should be ok and we have just re-upped the three versions on Google Drive too, you can find them all at the link provided by starchild.
Thanks for playing!


If you choose the ball (right hand)

If you choose the triangular object (left hand)
Questions