As the robot slave of some sort of mad scientist, you are tasked with finding and waking Lenore (whoever, or whatever that is) in Chamber Door. In this point-and-click adventure from Silver Stitch, you and your sidekick Eleven delve into dark forgotten chambers to begin your search. Use either [A] and [D] or left and right [arrow] keys to move, and press [S] or down [arrow] to interact with the switch boxes. After you activate a switch, use the mouse to control Eleven. 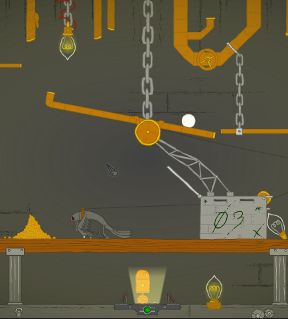 Inspired by The Raven by Edgar Allan Poe, the twisted story reveals itself through a series of scrolls found throughout the game. There is no inventory, so the puzzles are generally just a matter of clicking things in the right order on each screen. And although the cursor doesn't change for hot spots, various levers and knobs are fairly easy to spot. Chamber Door is great at setting a mysterious, somewhat creepy mood. The personality of the game reminds me somewhat of Windosill, but more spooky than whimsical. Short and simple, but with haunting piano tunes and wonderful atmosphere, Chamber Door offers up a solid little adventure even Poe would enjoy.

Guess I'll have to wait for a walkthrough :/ I've made it to the far right end with a wooden wall, and the far left end he leaves the scene. But nothing really said it's over. so I must be missing something.

Same as MtDewed. I /think I finished? There seems to be levels where more wanted doing, but once you tap that last bird it's just over. The mechanics of the game are good, but the plot and motives are a bit cloudy.

I guess I'll too have to wait for a walkthrough, just can't get past the first screen. It's too dark and I can't see a thing.

On the first screen, just walk right. The door opens on its own.

There's the room you start in, there are 2 rooms to the left of it (the study - far left & the conveyor belt that sets the ball off) then there are 7 rooms to the right. Room 4 right is pitch black (you initially see some eyes above you in the dark) and room 5 is also dark.

I am stuck in room 6, I've fixed the pipes (on the right of room 6) & got the bird walking which makes the red & green lights flash alternately.

Beyond that I am clueless.

Get the pipes fixed, then drop TWO orange drops on the bird. The first gets it walking, the second gets it walking faster and gives you a full green light.

Click the perch to bring the magnet up to the metal bird.

Stop comparing other people's games with big indie titles. Those game are good, but your using them to smudge the originality the author was hoping for. It even looks like your advertising with links.

Smudge the originality? Kimberly only said the personality of this game reminded her of Windosill. No comparisons were drawn. Whenever a reviewer mentions a previously reviewed game not only does it help inform people of the type of game this is but it is always linked. Every time a title, developer, genre etc. is mentioned it is linked. So anyone that has played Windosill might be encouraged to play this game and anyone who hasn't may be encourage to go play Windosill. Where's the harm in that?

I enjoyed both games. They both are very different but have the same principle structure. This game is well designed and fun... but it is hardly original. That's not a bad thing. Let the reviewers do what they've always done.

the mechanic of having the robot move between screens seemed pointless. It had some cool potential, but its never utilized, its just a overly complex way to switch between screens.

ack. I woke Lenore but the end scene moved too fast while I was looking away from my screen and I missed it, so will have to play again to see what appeared when I awakened her..

Eh, I'm with AbstractMatter. For one thing, this very much does not remind me of Windosill, nor was there any actual detail cited to even mention it. (To be clear, I'm not picking on this review by itself, but to AbstractMatter's implication that this is a frequent occurrence.) If it's a *genre* like with the Grow games � that is informative. It tells us what to expect. It tells us how the gameplay goes. The tag and genre links are often very helpful.

But most of all, it gives us a benchmark by which to judge a game.

Game developers have a hard enough time trying to stand out in the crowd, and here's a *review site* that falls back on another game in part of the description? It's not going to be a long review, either � so that's a big percentage. I mean, a metaphor is great, but this is writing for a specific purpose, and there are real people who might benefit from it. And I don't mean us readers.

It sets up the game for failure if there are preconceived notions that it's going to be something it's not. In the past year, I have seen several games where the commenters went mad over misleading descriptions, and likely down-voted otherwise sturdy games. And because JiG is a high-volume site, the first couple of hours is when those 20 votes show up for mushrooms. We're not coming back to find out that the reviewer corrected themselves (and/or engaged with commenters, which is a fairly new thing in non-internet time).

It's just not productive for anyone involved to toss out reviews like they're Hollywood pitches. I don't think it's too much to ask to be specific and detailed instead of "It's like Die Hard, except with more snow." In this case, I would say this reminds me of Little Wheel

in that you have a vague mission, yet half the fun is in discovering the twisted sideways world and how it works. The mechanisms likewise hint of an underlying order, though this game has a trace of sadism instead of joyful wonderment.
Even if this description causes confusion, I don't have to defend *why* it reminds me of Little Wheel, because it's included. And persistent commenters�like me�don't latch on to the missing information, which in gossipy comment section terms eventually comes off as the game being confusing instead of the review.

I mean, I appreciate every day that JiG is churning out the volume that it does. However if there is a rubric for typing these out, and editing them, as a long-time reader I think the description section does need to be tightened up. Each review must take a long time to write, but they are still short enough to be edited thoroughly.

Or, y'know, if it really is Die Hard except with more snow, back it up with some substance. In this case the problem *is* that there weren't any concrete comparisons drawn. Put some meat on the metaphors, please.

Thanks, Dandy, you nailed exactly why I made the comparison.

Perhaps I should have been more specific in the comparison. I'll keep that in mind for the future.

Well I only bothered to play this because it was said to be similar to Windowsill and I got exactly what I expected. 'Windowsill' is excellent shorthand for explaining exactly how the game plays. Whether someone has played Windowsill doesn't matter, it's literally one line in the entire review and if Kimberly were to explain exactly how it was like Windowsill no doubt you'd all be whinging more was said about Windowsill.

Apparently nobody else has gone into the room at the far left, past the treadmill? It isn't necessary so is easily missed I guess. If you go there though, you'll get an extra diary entry. It seems the diary entries are numbered from when you read it rather than where.

In the room you turn wheels and flip levers to drop bird seed, on the left is a lever on a pipe that loops back around the left. Flip that then head all the way back.