Peppy, cheerful Miley Verisse wants nothing more than to start up her very own club in her school, but her former friend and now student council member Octavia Richmond is carrying a grudge a mile long and has no intention of making it easy. Miley just wants to follow in the footsteps of her idols and become one half of a new comedy duo, but the rules state that new clubs require a minimum of five members to start. With a deadline for the end of April just a month away, are Miley's dreams of comedic greatness over before they even begin? Cherry Tree High Comedy Club is a unique, light-hearted game from 773, Nyu Media, and Capcom that delivers a blast of ultra-high energy sweetness to your day. Part adventure, part visual novel, part simulation, and all beautiful, light-hearted fun. 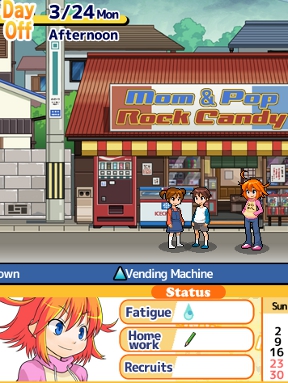 Miley needs three (or more!) new recruits by April 31st, so it's time to hit the pavement and track down likely candidates. Gameplay is split into three time periods, and during each one you'll be able to decide where to go and what to do. Potential members are all over town, but a winning smile will only get you so far. You'll need to buddy up to them and increase their Friendship Level to 5 to win them over to your cause, so make sure you spend time with them. Miley has the gift of gab, so you can participate in activities to boost her chat capabilities and charm people faster. Of course, different people are different things, so it's important to make sure our heroine is well versed on a variety of topics, from video games, to history, to travel, and much more. You can check out how suave Miley is by viewing her Repertoire in the menu when you hit [esc]. Additionally, you can perform a variety of part-time jobs to earn cash to spend on items to increase Miley's knowledge, or even just to pass the time. Just remember, you can only discuss each topic with a character once, so it might be a better idea to wait until Miley is stronger at a particular subject to get the most out of it.

During regular gameplay, use the [arrow] keys to move Miley (hold down [spacebar] to run) and press the [up] arrow in front of buildings to enter and [spacebar] to talk to people you're standing in front of. From the town map, you'll be able to travel to different locations where you can encounter different characters and story events. At Miley's dormitory, you'll be able to chat with her friend Harriet to save the game, but also work on... ugh... homework. The pencils represent the number of assignments she has left to complete. In addition to keeping her grades up, you'll also want to keep an eye on Miley's fatigue at the bottom of the screen and make sure she isn't running herself ragged. Just don't forget to keep an eye on the date; as new potential recruits become available, you'll want to prioritize winning them over. But don't give up! If Miley can't achieve her dreams, who knows what horrors the comedic world will have to make do with instead? 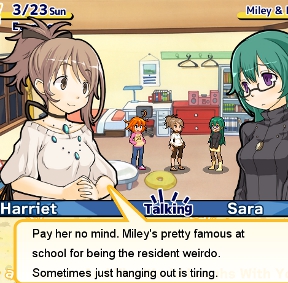 Analysis: If you're trying to find a game more aggressively energetic and cute than Cherry Tree High Comedy Club, well... good luck. From the vibrant presentation to the cheerful, wonderfully light-hearted story and concept, it's just the sort of game that makes you feel happy. It looks absolutely beautiful. Each of the potential recruits Miley can interact with have their own stories and personalities, and Miley herself makes for a particularly... dynamic lead, but it's nice to see how unexpectedly perceptive and caring she can be around her friends. The goofy jokes and overall tone of exuberant silliness won't be for everyone, but sometimes all you really want is to play a game that's trying its hardest to make you smile. It's chock full of anime and pop culture references, jokes, likable characters, and a whole lot of colour. If I could give some sort of award to this game for being like a shot of rainbow sprinkles in the eye, I would. It's very refreshing compared to some of the heavier titles around. 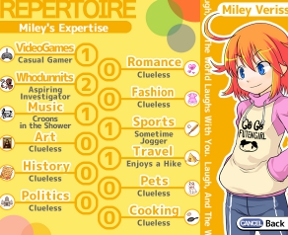 In a way, Cherry Tree High Comedy Club is structurally (and even rather stylistically) similar to Atlus's Persona series, specifically the two most recent titles. Only, uh. Without the deep soul searching, demons, and murder. If you've played Persona, then the relationship building mechanics will feel very familiar to you, and What this means is that Cherry Tree is at once both simple and yet surprisingly engrossing; the time can fly by before you realise it. In a way, this is also a bit of a curse. While the short game time demands you spend all your time interacting with people in a way that staves off repetition, it also makes the skill and homework mechanics feel a lot shallower and more like busywork. Especially since only being able to talk about something with any given person a single time is silly, even if the skills only serve as a boost to the standard chat option. The game's simple mechanics aren't necessarily a bad thing since it makes it a lot more approachable, but on the other hand players who crave deeper experiences will feel like there's some missed opportunity going on for it to be even bigger.

Light on drama but heavy on style and charm, Cherry Tree High Comedy Club is a gorgeous, peppy gem for people who are looking for something different and friendly. While it definitely feels like some aspects of its mechanics are underdeveloped, it's still a perfect casual introduction to the genre and excellent relaxing gaming. At around three hours or so, it's a bit on the short side, although if you want to get all of the potential club recruits you'll probably want to play again. It does end on a bit of a cliffhanger, of sorts, or at least a strong implication that there's another installment coming somewhere down the road. Cherry Tree High Comedy Club is a lot of fun while it lasts... a light, occasionally unexpectedly touching treat that's perfect to brighten your day.

Love Persona 3 FES and Persona 4 but I not the type to buy a game without trying it first. Last time I downloaded a demo for a game it stop right at the first given player made choice. Can anyone tell me how far the demo go before I download it? Is it just an prologue or a demo which I can play and not just read?

Miley needs three (or more!) new recruits by April 31st, so it's time to hit the pavement and track down likely candidates.
...wait, what?

Sorry ICXCIX, the demo wasn't available when I bought the game to play to review it, so I can't say how long it is, but I would still recommend trying it. I would imagine the demo would give you a good feel for the play. There's no combat like Persona or anything, but the "go around, talk to people, boost skills so they like you" mechanic is very similar. It's a VERY light hearted game.

We're looking in to the demo situation. The link was actually added in error, but it appears there was/could be a demo available at some point. We've asked for clarification. The short story is there's no demo at the moment. But if Dora says it's good, it's good. :-)

Does anyone know what the spinning top icon under interests on the targets page is?
OH, and nice to meet you all.

@Kevsion: It appears that they used two different icons for the History interest. When speaking with a character it will look like a piece of parchment but it appears that when looking at the target interest list it is displayed as a spinning top.

Welcome to Jay is Games, Kevsion!

The spinning top icon under the target's interests bar represents the history subject. Miley's expertise in the that skill is indicated by the number next to "History" in her repertoire. Hope that helps :)