Choice of Robots, from Kevin Gold and the inestimable Choice of Games, playable as a download, paid browser purchase, or for iOS and Android, is a meathy and philosophical sci-fi-esque text adventure presented "Choose Your Own Adventure" style that takes you through thirty years in the life of, well, you. Though of course here "you" means "a young man or woman building their first robotic intelligence and deciding both what that means for them, the world, and what will become of them". You'll literally design your robot from the ground up, and its purpose, personality, and ultimate destiny comes down to the choices you make. Virtually everything you do has an impact on your robot's system in the form of stats like Grace and Autonomy, while other decisions can impact your personal wealth, reputation, or even your relationships with the many characters you'll meet. Make the right connections and you could end up running your own robotics company, falling in love, or developing important friendships that could help you in the future... after all, you never know who's going to turn out to be President. Your path can branch in a truly enormous number of ways, and the world will change drastically over those three decades... will you fade into obscurity? Become a tyrant who crushes the world with a merciless army of your own? Find the person of your dreams... or build them? Thoughtfully written with warmth, humour, and intrigue, Choice of Games is an intensely satisfying text adventure that will keep you coming back for more with its myriad of endings and decisions that let you play the game how you want to, making for one of the most compelling text games in a long time. 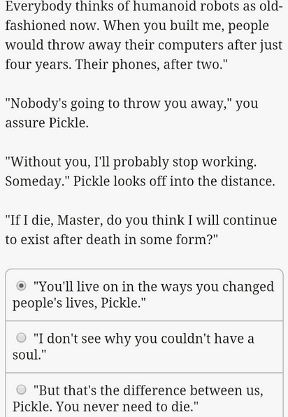 To play, just click the radial buttons to select your choices whenever one is presented to you. If an option is greyed out, it means you don't meet the requirements to choose it. There's no real way to play to win, since Choice of Robots is all about working your way towards whatever goals and relationships you want, so just make the choices that feel appropriate to you, though be warned... every decision has an impact, whether it be on your relationship with someone else, or increasing (or decreasing) your robot's statistics, and everything is permanent until you restart the game anew. As in most Choice of Games titles, you can be gay or straight when it comes to love, if you decide to pursue it at all, and anyone of any gender can be romanced no matter what your gender is at the start of the game. Speaking of which, it's a little strange that you can only choose male or female for yourself, but upon creating your robot, you're given the option to choose entirely new gender pronouns for it... something that I'm sure a lot of players would have appreciated being able to do when it came to their own character.

From the very beginning, you'll realize that Choice of Robots isn't messing around. Its writing is smart in about every conceivable way, not in an overbearing or intimidating fashion, but definitely a little heavier than your average text adventure. You'll be dealing with everything from ethics and philosophy to death and the consequences of war, and everything you do has a genuine, noticeable impact on the world the game creates. While not being able to save manually and jump around to different points to make different choices is a little frustrating in a game that's so long, the way little decisions in your past can pop up with consequences as much as the big, world-changing ones means this is one game with an impressive amount of replay value. The characters you meet, however, while important to the various plots and subplots in a lot of ways, don't always feel as fleshed out as they should. Writing a game like this has to be a massive undertaking, trying to account for every decision in a way that feels meaningful, and at times you may feel like some characters get more "screen time" than others regardless of your relationship. It's largely the same with a lot of the philosophical and moral themes brought up... they're deftly woven into the narrative in a way that compels you to think about them without beating you over the head, but at the same time, each one could have been given their own game and perhaps been stronger for it. The emphasis on war, or rather the potential of yourself and your robots for it, comes up so often that while it can of course also be taken on a commentary on humanity, it does sort of overshadow other parts of the narrative like human-robot relations or the nature of existence.

Take that with a grain of salt, however, because I found myself riveted to Choice of Robots for the two or so hours it took me to play through it, and then had an immediate desire to restart it and try something new. There's an enormous amount to experience and choose, and whenever you see the way your decisions shape the story, you'll find yourself thinking about how it might have gone very, very differently. A lot of games offer choice, but few make your decisions feel as important and personal as Choice of Robots does. If you've been craving a text adventure that knows how to balance fun with intelligence and human warmth (or coldness, as the case may be), Choice of Robots is an easy recommendation... perfect for a lazy afternoon. Or three. Or four.

I played the free chapters and happily plunked down the money to buy the game. It's structurally different from Fallen London but involves a similar level of commitment on the part of the writer. There really are a lot of different tangents your story can take, and the writer filled in all the corners.

Never have I ever been so invested in a text adventure that I bought it. I bought this one.

I strongly encourage you to try the demo for yourself, it's quite the gripping story. Whichever way you make it go.

This is a super complex game, but I made a small list for most of the common stat changes in chapters 0-2; due to how everything interlocks and whatnot you may get more or less from each choice, but this early there shouldn't be too much variation on what I hope are base numbers.

Beach (this one is more complex)

I love this game. I love robots. I love building robots with human faces and gun arms and pretending they're Mega Man characters.

I've played through a couple of times, and it's made me cry at least once. I don't even know what I can say.

I keep naming my robot Blues.

Does anyone know if it's possible to fall in love with your first creation?

(Also, I have to acknowledge the little tidbit about autistic children being taught by robots. That is the most awesome thing I have ever heard.)

For the achievement "Hat Trick":

In the Empathy route, move to Canada to legally marry your companion robot. This will work even if you have already achieved the "Robophile", "Spouse", and/or "Canuck" achievements. Note that I do not know whether other factors will influence the effectiveness of this solution, although I think it is safe to say you cannot already be living in Canada.