The first thing to remember when starting a new civilization is that if you want anybody to do anything for you, you have to feed them. A lot. That and a roof over their heads, and you've got yourself the start of something. Adding to the ever-growing collection of web incremental idle games comes CivClicker by Dave Holley. As an enterprising leader, it's your job to take nothing and build up a great civilization. The game is entirely mouse-driven. Simply click on the action you wish to take, and the population leaps to your command. They'll keep working for you even if you open a new tab in your browser. Playing more like a single player board game than others in the genre, CivClicker takes quite a bit more micromanaging. You have to adjust your resources carefully (using a system similar to that found in A Dark Room), in order to gain what you need to upgrade your town. 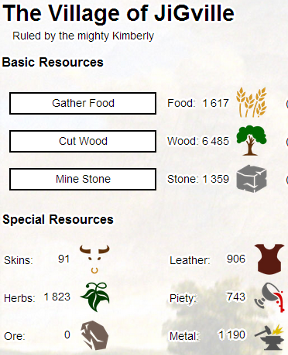 That's not to say there aren't more than a few surprises to tease out, and quite a few achievements to uncover, not to mention towns to raid, and deities to worship. You'll soon go from dealing with a single farmer living in a tent to hundreds of workers and soldiers living in mansions. While CivClicker keeps you engaged, it does feel a bit unpolished around the edges. It would be nice to know what you did to earn an achievement, for instance, or if purchased upgrades would disappear so the screen wouldn't become so cluttered. The game is being actively upgraded, however, so stay tuned for more content and improvements. In the meantime, there is still plenty of time to be wasted building and protecting your very own vast empire.

Thanks to Kevin for sending this one in!

Played this when it first came out and loved it. The first 70% of the game, building the culture and achieving most of the milestones, is well thought out. It really slows down in the last 30% where you're doing conquest, trying to build an army and fight. I takes too long to re-build your army, so gets monotonous. I'd like to see another version of the game that includes even more basic stuff with a focus on maintaining balance across many areas simultaneously (this was the best feature of the original Sim City). It seems like developers often feel the need to keep a game going forever, while most players would just like a satisfying stopping point before the game wears itself out. -M

Could we get a list of what the various deities do?

A god of the Underworld

requires corpses to build altars—one corpse for the first altar, two for the second, three for the third, et cetera. You can spend spend piety to raise corpses as zombies (which act as standard population) or raise spirits as extra defensive soldiers, and you can get passive upgrades to increase piety from deaths and graveyards, as well as an upgrade to help keep unused corpses from making your workers sick.

The Grace of Cats (deity)

To get more cats,

don't use a recruiter.

In other words, don't hire your workers in bulk.

The Bounty of the Fields (deity)

I like that there's an element of strategy to this. Balancing out your workers is crucial in the early parts of the game. At first I kept adding workers without balancing them out and then they'd be dead, not realizing that food actually did something as opposed to being a passive stat like most idle games. If you don't collect enough food, your workers actually die of starvation, which I thought was a neat touch.

Does anyone know the point of trading for gold?

Question: I've built my first barracks. I have three unemployed citizens. I assign two of them to be soldiers, but can't assign the third. Furthermore, if I unassign one, I can't reassign it.

Apparently they cost leather and METAL to assign

@neo1973 trading gold allows you to open the trading post, and then you can exchange the gold for rare resources, or help build the wonder. Once you get to that stage the rare resources are probably not a problem anymore, so at the moment I use all my excess gold to speed up the building of the Hanging Cheeses of Babylon :)

Building up the Thunderdome myself :)

How do I avoid overcrowding...? My current population is only the hlaf of the max I can have... =(

I'm not 100% sure, but I think overcrowding happens if you don't have enough free land. You get more land by

conducting raids with your army.

Raid other territories to capture land. Enough land and enough time, your people will "happy up".

Tips for raiding an empire:

Near the end of the game, increasing current population quickly is the main roadblock. As a consequence, it takes a while to accumulate enough soldiers to successfully raid an empire. A failed attempt potentially takes away a huge chunk of your population.

It's hard to predict the size of the empire you raid, so at the start, just send one soldier. If the nation you're raiding is small enough, click to send all of your soldiers and buy a bunch of siege engines.

Thanks for the answers... :D

After the last update (I think), I lost the ability to build graveyards, mills and fortifications, even though I have more than enough resources. Anyone else?

FINALLY. The incremental I've been waiting for. It has loads of strategy and depth. I am in heaven.

I found out too late I need skins to make farmers acquire skins, and now I don't have enough. How do I get more?

So has anybody figured out how to get Neverclick, Plagued, or Ghost Town?

Currently allowing my civ to pile up bodies so more people can get sick faster, thinking maybe if over 1/2 the living members of the civ are sick you get plagued? Dunno. Will come back with results of experiment.

@Stephen Thurmond - click the farms yourself. you can always get the rare resources by clicking the resource buttons yourself.

In other news, Plagued is, in fact, half your civ is sick. Whether this is by waiting for them to get that sick or sending thousands of workers off to their death in meaningless campaigns where they are hopelessly outnumbered matters not. Once half of them are sick, you get Plagued.

Nevermind my last post. The problem has been fixed today.

Welp, I figured out how to cheat and ruined the game for myself, other than that super solid gam.

I can't figure out whether this is a bug or by-design: aren't you supposed to be able to build more than one wonder? Or do I have to reset and get another deity before it'll let me start a new one?

@Reka
It's like the deities, you keep them after resetting.

You need to build a wonder with at most 22 resource clicks. You'll need 20 food clicks and 2 wood clicks to build a tent and hire a worker. You'll also need to quickly make them farm so they don't immediately starve to death.

a) Once you build 1000 buildings your people will get VERY unhappy very quickly. This affects your productivity and can be a big bummer.
You cant fix it until you get 1000metal/leather to start raiding.

To avoid it, get the Masonry upgrade ASAP for 100food/wood and build the biggest size houses you can do. In other words, do NOT spam tents, but build Cottages or whatever is the highest grade of thing.
This will help greatly in keeping your building count down without impeding your progress. Get the 1000/1000 upgrade too ASAP for Houses.

b) After you get your Diety to 50 devotion is a good time to Reset. You get to keep the permanent bonuses, and it frees u up to get a new diety with new bonuses. Field was my first choice as getting Food bonuses is pretty strong as a passive to carry over when resetting.

c) During a Raid you can ADD or SUBTRACT TROOPS! This means you don't have to watch as your 300 troops get killed slowly by their 440. Just retreat all of them (tho you lose your siege.)
This ALSO means that you can quickly recruit and add MORE troops to turn a defeat into a victory.
Really though you don't want to fight pitched battles as you lose too much resources from the dead troops you have to replace. Beat up on the small guy.

d) Mansions kind of suck. They take your precious Leather which you are trying to save for upgrades and troops. Once you are raiding, getting more land is trivial. So go back to Houses which only cost Wood/Stone. Who cares if they are less 'efficient'?

It got really dark once I realized how to be efficient.

Once you get the first underworld deity perk and restart, getting new people and instantly just letting them starve is a good way to get piety, and thus, a deity fast.

So for anybody wondering, completing a Wonder gives you the following:

That Wonder gets permanently associated with that resource and gives a 10% boost to production. Not sure whether that boost applies to click-production or not, but it does for worker production. Also unsure if they stack. Will get back on that at the end of next play-through.

FYI, if you're destroying your mouse like I was, notice the "custom increments" button on the bottom of the page... Helps tremendously.

The god of the dead makes for an excellent choice of god for Wonder generation. Build graveyards for the sole purpose of boosting Piety production, then go on conquests galore. You seem to get not only your own dead in corpse income, but the slain enemies as well. You can then buy all the workers you can with food, while it's cheaper, then raise all those corpses as zombies for the flat price of 100 piety each, where food-bought workers cost more over time. Even before 1 million workers, it gets cheaper to re-fill an army and ressurect gobs of zombies than it is to buy even a few more workers (not that you shouldn't, but it gets faster to do the latter, plus all the bonus resources and land)

I love my nifty Apple trackpad. When the trader shows up, my two fingers start dancing and I can get 200 gold if I'm right on top of it.

Autoclickers seem to be a must at the start.

Somehow I managed to get my wonder in the negative...

How do I reset everything, like my achievements also?

I haven't tried it because I don't want to chance losing my achievements, but I would guess clearing your cache would do the trick.

Use FireFox and Jscript:

3,596 Views
1 Comment
chrpa— Jayisgames needs your help to continue providing quality content. Click for details Welcome to Mobile Monday! After a few months, a new lovely Nicolet's game is out and you can return to their cute rodents' world. With APARTMENT BACON...  ...

8,052 Views
10 Comments
chrpa— Jayisgames needs your help to continue providing quality content. Click for details The beautiful warderobe bought cheaply at the local market had one flaw - the seller didn't have the key. But then a miracle happened - after river fishing,...  ...

The Slimekings Towers Review: So Much Fun

Views
0 Comments
jayisgames.com— When you first start Eternal Dreamers, you don't know what to expect. Honestly, it just looks like a super basic game made with RPGMaker. However, as you start playing it, Eternal Dreamers' crisis-fueled charm ropes you in. Soon enough,...  ...