You'd never know it to look at its perplexingly Minecraft-sy icon, but Naquatic's CivCrafter, free for iOS and Android, is actually an Odd Couple mashup of incremental clicker games and a simplified version of the Playver Versus Player of Clash of Clans. In the beginning, it's just you and three icons to tap on... the apple collects fruit, while the log and rock collect wood and stone respectively. Tapping on each icon gains you a single unit of that resource, and eventually you'll have enough you can spend on building things, though these resources can also be spent on upgrades down the road. When you've built enough houses to start a population, you'll need to employ your civilians to work... farmers are important for making food, of course, since the more people you have, the more food depletes, while loggers and miners gather what you'd expect autonomously. Note that unlike similar games, CivCrafter does not gather resources while you're not playing. It's simple to start off, but as you play, you'll realize things get a little more complex... farmers, for instance, can find skins, which you'll need to build a tannery for and employ someone at to convert them into leather. Eventually, you'll need this and other "secondary" resources like metal from refined ore in great quantities, both to unlock more powerful upgrades, but also to outfit your army. Yeah, that's right. You'll need to pillage and defend yourself from being pillage, and maybe even join a Clan, if you want to get all the trophies and skulls you can. Because who doesn't like trophies and skulls? 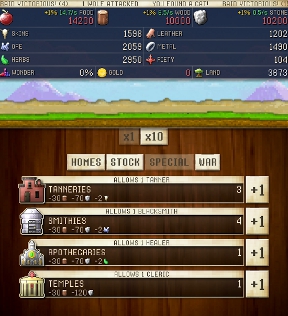 CivCrafter is painfully slow to start, and the lack of offline resource gathering makes it even slower, at least compared to most other incremental games. According to the developers, this was by design, so players just starting out wouldn't find themselves constantly outclassed by others who had simply had the game longer. Still, if you can slough through the many, many taps you'll need to make to start balancing your incoming resources with your drain on building them, you'll get your feet under you and finally start being able to raid other (random) players. These attacks are largely hands off and come down to numbers... who has more troops, and of what type, though it's important to note that if you're doing the raiding yourself (or around when someone raids you), you can buy more troops as the raid is happening. Winning not only grants you piles of resources depending on what size of foe you attacked (thorp, village, etc), but also skulls and trophies to increase both your ranking, and that of your Clan. Why join a Clan? (Such as the official JayisGames Clan, whose invite code is RACEV666)Well, mostly because it gives you a boost to your resource production. In short, while CivCrafter is maybe more deep than it initially appears, it's still not particularly complex, offering an alternative for players who don't have the inclination towards the more elaborate Player Versus Player style of Clash of Clans, rather than a replacement.

While there are in-app purchases, they're limited to gold (and any purchase removes the ads). Whether this makes the game "pay to win" is arguable. On the one hand, a single piece of gold (also granted during random NPC trades and leveling up) buys ten units of any resource, but once you begin raiding higher level kingdoms, your gain from raids far outstrips anything you might make by spending gold. On the other hand, gold can also be spent to instantly speed up the timers for research, and the cost for doing so quickly becomes high enough that if you don't want to wait, you will need to fork over some cash. CivCrafter is, quite frankly, a very weird little game, but that's part of its charm. If you don't enjoy the simple satisfaction of raiding and watching your name climb the ranks, you might find it a little limiting, but for others, the goal of unlocking powerful new units like dragons and other upgrades (as well as that all-important pile of skulls), not to mention trying to unravel the mystery of cats, will make it a great casual alternative to the more complex PvP games around. CivCrafter is cute and addictive, if not particularly deep, and a great choice for fans of both tapping and driving their enemies before them, while hearing the lamentations of their significant others.

The JIG clan seems to be full.

I created a clan. JEREW936
I would like to start raiding on Saturday early evening. It gives time for people to join and to build up their population and army.

There are not comments, but this game is rated, some one around here must be playing it.

Piety
Food, wood and stone storage. Immediately start getting more storage, you will nearly always need the extra resources, so always build more.
You will need a lot of piety for upgrades. Wood and stone run out fast when you need more upgrades.
You can hold your hand on the screen to gain resources faster. This can be useful until you need over about 10k, then you need to just move your population around. At about300k population it is quite fast to max out your resources.

adds 10% boost to a resource. You can get more after starting over and making another


You can get a wonder over time easily by

Keeping a few people in the wonder at all times. Once your resources gain 1,000 at a time you can throw 1,000 workers in their and have a wonder very quickly.