Cats. Aren't they just the cutest and most sinister creatures ever smuggled into this dimension? Dingo Games, creator of Tasty Planet, knows what we're talking about, and the team's latest release Clumsy Cat illustrates it with style. Not only do you get to see the hidden world of pet life, you get to participate in it firsthand with a game that's all about doing the naughty things pets do when us sapiens are away: destroying everything they can get their paws on. Clumsy, indeed.

Using a finger and your device's touch screen, tap to either side of your chosen pet to move in that direction. Tap and flick to jump, leaping to climb on top of shelves, stairs, and the like. Your goal is to cause as much destruction as you can. You can destroy things simply by hopping on them, knocking them over, or our favorite, pushing groups of them down the stairs. Each object has a name and a value, and you'll be ranked on total damage done when your two minute round is up. Go for the priceless art, skip the tables and chairs!

Analysis: Mindless destruction hurrah! Clumsy Cat is a free download, and indeed it's free to play for as long as you like. New characters can be unlocked via an in-app purchase, and there are over 20 to gain control of, ranging from a fat cat to a raccoon, monkey, pony and koala. Characters have different stats to work with as well as a new appearance, so if you don't think the default kitty has enough pushing muscle, maybe the cow will be more to your liking? 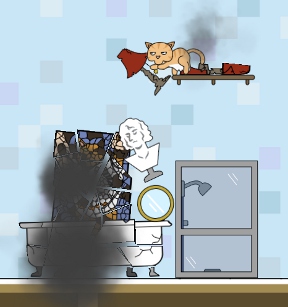 The controls in Clumsy Cat are worth mentioning, as they will likely cause some contention. At best, your control over the animal is imprecise, and at worst, it can be frustrating. Swipes and taps only provide rudimentary control, which is fine when all is quiet and calm. The moment you start leaping around and wiggling between pianos and shelves, though, you'll realize there are limits to not having precise, button-based controls. You get used to them and will eventually acquire a level of mastery, but we can't help but think a virtual d-pad would be a logical inclusion for a future update. (Note: Our wish has been granted! After this review was published, Dingo Games released an update that features two new control schemes that offer much more precision over the default setup!)

If you're ready for a little destruction followed by a lot more destruction, Clumsy Cat is here to provide! It's a great casual time waster that might just take the place of throwing dishes when you get angry!

2,309 Views
0 Comments
chrpa— Jayisgames needs your help to continue providing quality content. Click for details Welcome to Weekday Puzzle! Jani Nykänen's pixel puzzler is fun - it's Pacman-like game with blobs. In pancelor's puzzlescript puzzler you need to get boxes on their...  ...

4,041 Views
17 Comments
chrpa— Jayisgames needs your help to continue providing quality content. Click for details Hi, the newest Weekday Escape is here! At the beginning you are supposed to escape from two U.S. states with Selfdefiant, and then you find yourself in...  ...

2,093 Views
2 Comments
jayisgames.com— Jigsaw puzzles have been around for centuries, and they haven't changed much in that time. They don't need to. Nothing beats a jigsaw when it comes to quiet, focused, meditative gameplay. I'm A Puzzle, the online jigsaw compendium from...  ...

2,536 Views
3 Comments
chrpa— Jayisgames needs your help to continue providing quality content. Click for details Welcome to Mobile Monday! This is the first Mobile Monday in 2022 and we start the year with three excellent games. No need to introduce the developers...  ...