Color Instinct, a physics puzzler by Lilley Design, looks innocent and simple when you first start it. You get to play with colourful bouncy balls and tiny little stars, and isn't it great to feel like you're in kindergarten again? But the game goes pretty quickly from "I can do this with my eyes closed" to asking your entire household to help you beat a level. The catch is that it seems so easy and straightforward that you can't afford to admit defeat, because if you do, you're the person who couldn't beat a bouncy ball game. To start your arduous journey, simply click to shoot the ball out of its pod and try to collect all the stars. You can only pick up a star with a ball of the same colour, and that's where the fun (or torture) begins. 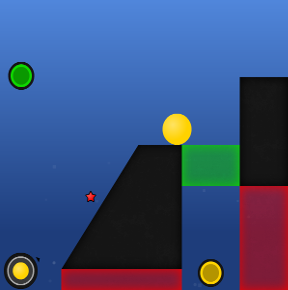 It would be sort of unfair to say too much about the mechanics, because part of the game's charm lies in discovering them on your own. The basics go like this: if you shoot a ball into a coloured pod, the ball will change colour accordingly. If there are coloured walls or other objects, the ball will go through them if it's the same colour, or bounce off them if it's not. Not all pods are the same; some have limited uses, some shoot more than one ball, and some will let you pick the size of the ball. New elements are introduced right until the very end, and the learn-as-you-go process makes the puzzle solving harder.
Every level asks you to think a little differently, so there's often quite a bit of trial and error until you realise what you have to do. But that just makes beating levels that much more rewarding, and shouting "in your face, game!" oh so satisfying. Color Instinct will keep you busy, frustrated and wonderfully challenged throughout the twenty-seven levels (plus five bonus ones), and your brain will ultimately thank you for it. Plus, if you end up liking its cleverly nefarious modus operandi, you can always inflict more of the same on the world in the level editor.

If I could undo shots it would be fun, but otherwise I find having to restart levels over and over to be not fun inducing.

What on Earth am I supposed to be doing on level 1? Knock the swinging ball from the chain?

@ Corona
If I understand correctly, you're still at the title screen, and that's not a level :). You have to press "play", and then you'll be taken to the actual first level.

You'll also need to know that

The entrance to the secret levels is behind that hanging ball. There are 5 of them, and they're actually pretty easy and fun.

Nice little game - challenging puzzles. Would like to see a sequel.

@Corona - to get the secret level green star, you have to click on the color green in the 'O' on the start screen to change the color of the ball green, then get the star.

The big red ball moves too fast to get the green one in front of it, and I can't seem to knock the green ball back hard enough on the top to go that way.

Let the big red ball just start rolling, then hit it with the yellow ball. If you hit it too soon, you will knock it off the back side and have to restart. If you hit it just right, it will roll back slightly, slow to a stop, and then start rolling down the ramp. This will give you just barely enough time to finish the level.

To finish, as soon as the yellow ball lands back in the cannon, shoot it down, left, then up into the red cannon.

Once you have a red ball in the red cannon, shoot through the big red ball into the cannon that you started in.

By this time the green ball should be just above you. Shoot it to bounce it over the short wall into the green block.

If you do all of this quickly enough, it should drop down just before the big red ball makes it to the edge.

As soon as the green ball makes it into the cannon at the bottom right, be ready to shoot the star before the big red ball gets in your way.

How the heck do you complete level 7? (I'm hoping the power of posting will help me out here...)

Okay, it totally did.

I have no idea what happened, but while I was writing, EVERYTHING CHANGED!!!

Can anyone else hear the theme song from Postman Pat in the background music?

@ Itt: Thanks. It took a few tries, but I was eventually able to get it. It takes precision timing.

Sorry andrew, your hints aren't helping at all. No idea how to get past 7.

The final level seems to be impossible...

Stuck on second to last level. My timing is horrendous. Great game and the music is awesome.

Simple rules and a lot of varieties in levels…this is a great game! I like the music, too.

For those who want to see solutions to the 27 main levels, there is an official video walkthrough: http://www.youtube.com/watch?v=ihgs9VxQHxo

I solved level 13 in a very different way from the official walkthrough. Here is the modified version of level 13 that requires what I did. Load the following level code in the level editor to play.

(Since the level code is very long, make sure you copy all the letters and no newlines at the beginning. The end of this level code should read R11hghahah.)