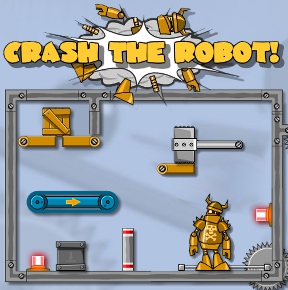 It's always been our philosophy that robots are our friends. They're smart, they can do cool things like make toast, and if they ever rise up and start an apocalypse, they'll remember we were nice to them! Not everyone holds the same "just in case" ideas in mind, of course, and Crash the Robot from Tamas Games proves just that. Your goal in this physics-based puzzle game: set up bombs to press buttons that eventually cause a robot to be destroyed. Fortunately, the little golden guy doesn't seem too upset about it, as level after level he comes back for more. Points for persistence!

The basic idea behind Crash the Robot is to manipulate platforms, levers, crates, balls, pendulums, and other obstacles so you can eventually bump switches or knock something destructive onto our mechanical friend. The action begins as still as a sleeping robot, allowing you to grab inventory items from the top and place them in the space below. Get everything in place to set off the chain reaction, hit play, and if it doesn't work out, pause the game again and get to tweaking!

There's more than just bombs and a hapless protagonist in Crash the Robot. In later levels you get to play with crates, planks, bombs that explode in sequence, and even a sawblade or two. You can use these items to interact with magnets, trampolines, balloons, and cannons, some of which can be moved to better suit your anti-robot purposes. Often you'll be required to construct balanced structures using materials, while other times your job will be as simple as shoving a sawblade on to the robot's head. Solving the game's puzzles is just as much about precision as it is about figuring out a viable solution, so a little trial and error goes a long way.

If there's anything lacking from Crash the Robot, it's that the game doesn't really try anything new. The concept of blowing up a robot is quirky, the interface is smartly designed, and there are plenty of objects to mess around with and levels to complete (40 in all, not including five bonus stages), but when it comes down to it, Crash the Robot plays like most other building-type physics puzzle games. It plays well, mind you, but it doesn't rewrite the book, it just adds another chapter.

Whether you've got a bone to pick with robotkind or you're just looking for a fun physics-based diversion, Crash the Robot is happy to assist you!

Got up to level 5 (the first one with a jumper/trampoline/etc.).

If you don't succeed, hitting "Reset" totally resets the position of the trampoline, making it nigh impossible to tweak your solution between attempts.

Assuming that the levels get progressively more complex from this point, that's a real mood-killer.

This game needs to a "Stop" button. I don't usually complain about no story but why are we destroying a viking robot.
What's with the Mochi bomb?