The prototype Crayon Physics (Windows) from Kloonigames is part of Petri Purho's ongoing experiment to create games in less than a week to test new ideas. Crayon Physics is one part Armadillo Run, one part Line Rider and tasks you with guiding a ball through a handful of stages by drawing shapes with a crayon-like cursor. Because of its rapid development time, Crayon Physics is a bit rough around the edges. But this downloadable title is stuffed with creativity and shows that with a good idea, anything is possible. 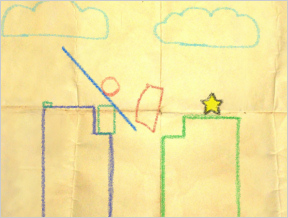 In each of the seven levels in Crayon Physics, the ball starts on one side of the screen and one or more stars are placed across the stage. Obstacles sit in your way, of course, but your main enemy in this game is the vast open space that threatens to swallow the poor little ball. Your weapon is the cursor and you can draw strange shapes (that usually revert to square/rectangle-ish once complete) to push items on the screen or provide platforms for the ball to roll across.

Dealing with the game's physics will be your chief goal, and you'll need to stack drop, slide and quick-draw to make it through each stage. The main game only has a few levels, but Crayon Physics fans have pieced together a handful of new stages to extend the experience. Check out the first four fan levels, then dip your crayons into some extremely creative themed levels.

Analysis: For a five-day project, Crayon Physics is very impressive. There are naturally a few glitches here and there, and the physics feel a little loose at times, but it's to be expected from a prototype game. The concept is shown off quite nicely with the charming crayon visuals and simple game mechanics. Everyone seems to love physics-based building games these days, and Crayon Physics nestles itself alongside some of the most creative titles with ease.

Get a little taste of creativity in its rawest form. And cheers to Kero for suggesting the game!

This was great and pleasant fun. And, as I am always on the outlook for something fun for my eldest too (4,5 yo)- to add in his bookmarks or desktop folder, I look forward to show him this tomorrow. (And, for every other parent out there, who might be sickened of the so often too bright colored, almost always too sweetened music, and as a rule much to honeyed sound and voice of the specific kid-targeted computer-fun: here is two links, both reviewed here at jays, long time ago, but now updated and added with plenty more to explore. http://www.poissonrouge.com/ and https://jayisgames.com/archives/2007/04/feed_the_head.php

I must be the only one who knows of the existence of the Crayon Physics editor then?

Yet ANOTHER Windows-only game. It's always disappointing to see a downloadable game review, then seeing that there isn't a Mac version. Us Mac users like to download games and have fun, too.

wow this is cool

Wow, this was great! I He could've added more levels and put it online, I would have given this a vote for the new contest! WOW

I have to agree with dotcomlarry.

Not so much that I mind if you feature games that I can't play. And you even warned about it in the review now that I re-read it.. but it was very subtle, a parenthetical "(windows)" in the first sentence, which I completely missed, and then read the review and then... oooo... you are such a tease.

I'm not going to go buy a PC, you might as well just say at the top of the review in unmistakable headline "Mac users go get a cup of coffee and come back later".

Well, unfortunately, 90% of the stuff out there isn't for Mac users, so you probably shouldn't be surprised if the downloads don't work for your OS. It's just the way it is.

I played this game a little while ago. It's great. Really fun time-waster. Neat idea, as well, and the graphics are very cute and charming. The music's very relaxing...
I had wondered why it hadn't yet graced the front page of Casual Gameplay...

Seriously, bootcamp is amazing, and Vista runs SO well on it, even though it's a macbook w/no video card, and even guild wars runs at 30-50 fps. Bootcamp ftw! No more complaining ;)

Oh and the game was nice too :P

giving google some tries didn't brought up any thing useful for you but i didn't searched deep so maybe someone on jayisgames (visitors and posters etc. ... jay) is having an idea. Maybe try some more searching but i am pretty sure there is a solution without switching to windows. :D

Mordecai: I completely agree that Jay is Games = Joy.

My point was, it would be nice if somewhere near the top of the review, it was made very very obvious that the game is only usable on Windows (or bootcamp or parallels), so that those of us who are left out don't waste our time.

Perhaps when I upgrade I'll feel differently, but for now I have an old non-Intel mac (which does everything I want it to do, aside from some games).

But come on. This complaining every time we post a Windows only download is ridiculous. I have to echo what Ben! said above: you probably shouldn't be surprised if the downloads don't work for your (Mac) OS. It's just the way it is.

We DO mention that it's for Windows only in the first paragraph of the review when we post a game of this kind. However, we did forget to put the Windows/Mac icons in this review, and I am sorry if it caused you any inconvenience at all.

Solution: Trade that non-Intel Mac (or your old PC for that matter, which is what I did) in for an Intel Mac to be able to run ANY operating system, and to stay compatible with the rest of the world.

Actually, yeah the icons really do help. Whenever I see that it's a download, I scroll down and check if there is a Mac version first. Thanks for putting those in, and sorry for complaining... (I don't always, but I gather it's happened before).

I'm looking forward to the day that I upgrade to an intel-based mac, but I currently have no impetus to do so, my G4 is serving all my current needs.

And now for some comments on the game, see below:

Well, it's not really serving all your current needs, now is it? >:)

(...says Jay who until just recently had been happy with his G4 Powerbook, except for its lack of support for other operating systems. Now with an Intel-based Mac, he feels it is the wisest computer-purchase he's ever made.)

if you guys wanna find some downloads for the macs some day, that would be nice..

i read the comments only AFTER posting..

i guess i'm not the only mac user frustrated of seeing so nice-looking games unavailable for macs..

there are indeed some pc games that are playable on mac, but the list is very short unfortunately, and the choice is not very large..

when the macs are gonna take over the world, we'll make some games that your pc-ers will not be able to play.

until then.. well.. i guess i'll play on my boyfriend's pc.. lol

p.s. jay, even if there is not that much downloads for macs, your site rocks ^^

i never log in without checking if you have found the game of the year.. ;)

It says it can't run because "JVM.dll not found" or something like that... PLEASE HELP

This game is fun, but really short. So I downloaded the "Four Fan Files For Fun" (FFFF That's 5 Fs hehehe) and played them. Now I'm trying to download the other packs (from the other link, creative themed levels). Ok, they downloaded just fine, but how can I play them?

Psssh, another Windows-only game? I'd really appreciate it if you'd review some more games that run on UNIVAC. Not all of us have the money to upgrade to a supercomputer!

I personally prefer linux downloadable games (I'm not actually joking) I accept that I won't get those though.

How do you play the Four Fan Files? I extracted it to my Crayon Physics folder, but the screen is just black...

Nice little concept, but I found that all too many of the levels could be solved by the judicious spawning of fulcrums to ping my ball about the screen. It would be great if either Petri or someone else took up the baton and rounded it off some. On the plus side the graphical style of the game is absolutely fantastic and contrasts fantastically with the somewhat dry subject matter!

Hey, how do the other creative levels work? I can't get to play them!

AGH!!! Please make this for mac! It looks so amazing!

Great game, even on mac.

Oh I love my new tablet that I just got two days ago! Sorry, that was almost off-topic, but it explains why I am so late to this forum. If anybody is still reading this, could you tell me if you are also having problems with the kloonigames site? I keep getting Word Press errors on almost all of the pages. Clicking the "install.php" link just comes back to the same page. I got the download from an irritating mirror site, but I can't get the additional levels anywhere. I am eager for the Deluxe to come out, I wonder if that will be soon?

Never mind. A little patience revealed that a combination of WordPress database corruption and a Denial Of Service attack caused all of the weird symptoms. It wasn't just me, and apparently it will get fixed up at some point.

This is also avail for the iPhone.

if you play this too much on your iPhone, your iPod music wont make noise and it will only play for 5 seconds.

How do I play?