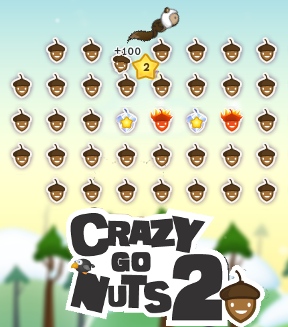 Squirrels are nothing if not resourceful creatures. They're clever enough to stow away acorns for winter, so why shouldn't they be clever enough to invent cannons for the sake of blasting themselves through row after row of things? And on top of that, they're safety-conscious enough to craft helmets to shield their fuzzy little skulls from the impact. Pretty progressive for rodents, don't you think? Help the crazy critters out in the latest squirrel-slinging arcade game from Miniclip: Crazy Go Nuts 2.

The premise is mundane enough: you're using a cannon to launch squirrels like bushy-tailed missiles into clusters of airborne acorns, hoping to accrue enough points to beat the level's target score and move on to the next. Just like I said, totally mundane. The mouse aims the cannon, and clicking the mouse fires the cannon. [R] is used for resetting the level, [P] pauses, and [S] is a wonderful key that resets your last shot. Doesn't sound too glorious, but when your squirrel gets stuck bouncing about for eternity in a little wooden box, you'll be glad that key is there.

Scoring isn't too advanced. The more acorns you hit with one rodent, the more points you rack up. Also, the longer your combo, the more stars you receive (which you can also collect from shooting star containers), which bolster the point value of every acorn shot. On top of that, there's multi-shot acorns, fiery acorns, and an inexplicably fun "There's only a few acorns left" mode where your cannon becomes a gatling gun of furry fury. Suffice it to say, the squirrels have their work cut out for them.

You'll quickly appreciate the aforementioned shot-reset key, as there will be many a shot where a squirrel gets hung up on an obstacle of some sort, and no more shots can be fired until the squirrel falls off the playing field. Also, some of the later levels seem to require a little bit of old-fashioned quadruped luck as opposed to complete skill, but given the nature of the squirrels' weight and well-timed ricochet shots, that could be debatable. It's really all about how long you can get your combos to run, and whether or not you can get to the power-ups early in the match. If you get stuck on a level too long (which can happen), you can switch between two seasons for level variety, which ought to keep you from going actually crazy. Otherwise, have fun and go nuts!

'Tis fun, but sometimes annoying when you can't figure out a way to get your score above the necessary amount.

At last! A chance to use my awesome Peggle and Bloons skils! I'll surely get a girlfriend now! (awesome game by the way)

Hmm, interesting, and a nice and fun game although it does bring up a certain issue of where you draw the line in terms of your sources.

Crazy Go Nuts obviously has its root in Peggle, that is something that I'm sure even they wouldn't argue. And at the end of the day that is fine as what they have done with the games dynamic is nicely individual and goes beyond Pop Cap's work with lots of other features and dynamics, and in that regard well done!

However, the 'Hallelujah' chorus upon completion is to my mind both uneccessary and badly implemented.

It is uneccessary in that they could have looked at why it works in Peggle (there is a wonderful article on the 'making of' which appeared in Edge Magazine) and realised it is about the satisfaction of completion and so then gone and found a NEW musical stab rather than stealing the idea, verbatum, from its source.

For the second point, in that it is badly implemented, this follows on. The refrain that they have chosen is turgidly slow and has none of the gratification that the refrain that Peggle used. As they said in the article, that piece of music was actually put on by one of the coders as a joke but they realised (through the hard work of going through the development) that it heightened the game play due to its explosive opening at the moment of completion.

The Crazy Go Nuts developers have undermined their hard work to a point by sloppily throwing on this shameless purloinment and I guess I just wanted to say that it's been noted and it has undermined the experience by a large degree.

Not being a fan of Peggle, I'm finding this one surprisingly fun. Nothing quite beats having a screen full of gatling-squirrels and *then* hitting the Flaming Acorn. Wa-Hoo!!

The background country sounds, and the whsh of grass as the squirrels land in it are quite nice touches. Not earth shattering, but a very fun way to pass the time.

I enjoyed the game, but that annoying Hallelujah chorus was getting on my nerves.

And this is yet another game that unnecessarily locks levels. I was enjoying the game, but then got locked out of the last row.

It's just not worth replaying the same level to continue. Oh well.