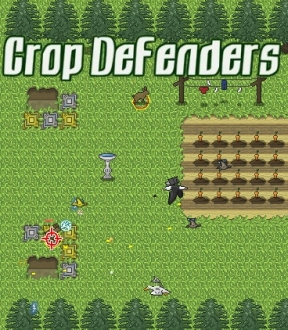 Proving there is always something left for us to defend in the genre (and new ways to defend it), indie developer Robby Scherer offers Crop Defenders, a shooter/trap-oriented defense game. What are we defending this time? Well...crops. What's even stranger is how we're defending them; by using an assortment of birds mounted with heavy artillery, in addition to various traps like spikes, electric pads and explosive mines. Crop Defenders is inspired by several tower defense sub-genres; instead of protecting a goal via strategically-placed towers along a fixed path, you're tasked with guarding a small patch of crops from invading rabbits, deer and other hungry wildlife. The lunacy of using ammo-packing avians to fend off an assortment of woodland creatures is a testament to Crop Defender's kitschy charm, but its gameplay is pretty fun. There's a lot of entertainment to be had in raining down death-from-above with a variety of exotic, upgradeable birds and using gruesome traps to your tactical advantage.

Like many defense games, each level features a number of enemy waves in which "creeps" (your furry woodland creatures, in this case) spawn from fixed locations, hell-bent on reaching your crop field. Once they do, your crop field's hit points gradually decrease as they chow-down, unless your army of feathered friends can stop them. Players begin with $40, which can be spent on your first selection of birds and upgrades. Earn more cash by destroying enemies and successfully defending your crops each wave. The purchase menu between each wave allows you to buy new birds and upgrade their abilities, as well as buying and placing both permanent or temporary traps on the field. Fortunately, your flock can't be harmed; you can buy as many different birds as you can afford, which persist through each wave. Out of eight birds in all, each is armed with a different type of weapon; the Sparrow is the cheapest of the lot, carrying an all-purpose starter canon. The more expensive the bird, the higher damage it deals. The "Upgrades" tab displays your army's total DPS (damage per second), which you can raise by upgrading an individual bird's attack damage or firing speed. 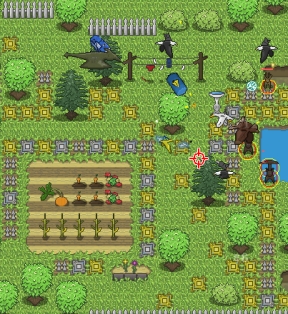 Gameplay is exceedingly simple; use the mouse to aim your targeting reticule and press the left mouse button to fire (click-and-hold to maintain). The entire flock will automatically follow your aim, flying around your targeting reticule. Creeps will spawn from multiple locations on the field that resemble holes, making their way toward your crops. In later levels, the action gets a bit more intense when you're tasked with defending multiple crop fields. However, an assortment of traps gives you the ability to inflict damage to creeps while you're busy mowing them down on the other side of the map. Between each wave, you can buy Spike Traps, Shock Pads, Mines and Explosive Barrels to place at strategic points throughout the playing area. Spike Traps and Shock Pads are permanent and inflict automatic damage whenever a creep walks over them. Mines and Barrels are one-use only; both detonate on-contact, but inflict varying degrees of damage (and area-of-effect damage). Each wave, stronger creeps emerge with more hit points, and in greater quantity. As levels increase, the playing fields become increasingly difficult to manage, because the layout includes multiple crop fields, more spawning locations and terrain that works against you.

Analysis: Crop Defenders isn't necessarily a shining example of innovation within the tactical/defense genre; rather, it steers a popular offshoot niche in a unique direction. The graphics and visual effects—reminiscent of something you might expect from the 16-bit era—aren't particularly noteworthy, but the gameplay is a different story; defense fans will appreciate the blend of action-oriented shooting and the tactical deployment of traps. However, the action does become a bit repetitious after the first few levels. The ridiculous array of birds and their specific weapons, such as Turkeys with missile launchers and Pterodactyls with Nitrous Tank Bombs, does helps relieve the monotony, and upgrades are always a welcome addition to any game. The "traps" mechanic is Crop Defenders saving grace; it would have been difficult for the title to stand on its own without that extra layer of gameplay. Regardless, Crop Defenders offers a refreshingly-fun way for shooter and defense fans to get their fix, in bite-size sessions of 10 or 20 minutes per level.

Why grow crops when there are enormous swarms of hungry wildlife to eat? :)