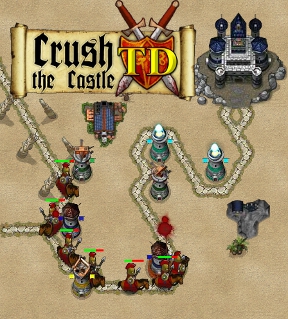 If they're breaking out the trumpets, it must mean it's time to get our epic on, and that must mean it's time for Crush the Castle TD from Joey Betz and Toge Productions. After a long and successful series built around destroying castles in the most spectacular fashion possible (who doesn't love a trebuchet?), you might not expect to be called to put your skills to work saving the very sort of structures you once so gleefully pulverised, but that's just what's going on in this tower defense game. Once again you take up the mantle of Siege Master, but this time to defend your kingdom from invaders. Forget Sun Tzu and complicated military tactics; you know all it really takes to win the battle is a few finely tuned catapults and the will to use them. Come on, be perfectly honest; if mounting some siege weaponry to the roof of your car wouldn't get you thrown in Super Crazy Person Prison, you'd totally do it.

The actual gameplay is pretty simple; click on a tower's icon at the bottom of the screen, and then click anywhere on the map that doesn't display as red to place it. Your tower will take a second to be built, and then voila! Instant death machine. You can control the speed of the gameplay with the pause, play, and fast-forward buttons in the upper right of the screen. Enemies will appear from the banner at the edge of the screen and march towards your castle, and it's your job to stop them from getting there. Towers will attack anything in range, so proper tower placement is a must... especially since on levels where there isn't a road, enemies will walk wherever they darn well please. Killing an enemy nets you gold which you'll use to spend on upgrading your existing towers, or building news ones. There are also several special structures you can build that, while not able to attack the enemy themselves, will enable you to use certain upgrades to better facilitate your dude skewering. After each stage, you'll be awarded sweet, sweet experience points based on how well you do, and when you earn enough to gain a level, you can spend it on new upgrades to apply to your towers in game. 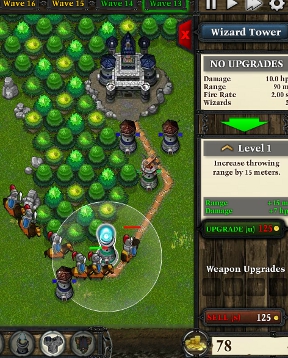 Analysis: Crush the Castle TD is actually a pretty good looking game, as tower defense titles go, marrying clean design with appealing sprites during the game and an appropriately bombastic fantasy soundtrack. Things do fall curiously silent during actual gameplay, however, which makes me wonder if being a Siege Master is a lot like being a golfer, and everyone just politely claps softly whenever you turn someone into a smear on the landscape so they don't break your concentration. Having been privy to an early build of the game while it was still in development, I'm actually fairly impressed by how far it's come and how much the gameplay has been developed. The group of towers at your disposal that unlock as you play are all useful, and often the right type of tower in the right location can mean the difference between victory and defeat.

It isn't until the second area, when roads become a luxury and enemies stop filing in like obedient gradeschoolers to your gauntlet of death, that the game really becomes interesting and challenging. The first few times you encounter a stage that's largely road-less, you'll probably have to do a little trial-and-error tower placement to figure out what works, but working out how to use the terrain and your towers to force enemies to go where you want them won't take long. It's just disappointing that the skill tree feels somewhat underdeveloped and tacked on... like you're just paying someone to have the privilege of paying someone else. It might have been nice to be able to unlock a bunch of new useful abilities to pick and choose from, rather than just a series of upgrades that, while helpful, don't really feel like they do much other than make what you've already got work better.

Crush the Castle TD doesn't necessarily break the mold, but it does provide a sturdy experience that fans of the genre and Joey Betz's work in general will really appreciate. It plays well, it feels balanced, and requires just enough strategy to get that shiny gold medal that tweakers will enjoy it, but not so much that casual fans will feel intimidated. While actually preventing a castle from being crushed might go against everything you hold dear, you'll still want to give this one a try and see how the other (non-crushed) side of society lives.

Special thanks to Gordon! for sending this one in.

Has anyone noticed the name of the Kings are referencing multiplayer two team battle games (Red and Blue).

I think what I like best about this one is the hex grid the engine uses. Maps look better with hexes, and it is *so* much easier to tell at a glance what path segments your towers are going to be able to hit. I wish more TD games did this.

Saw "Crush the Castle" and got excited...
Saw "tower defense" and went "squee"...
Saw armorgames.com link and went 'gah! now I gotta wait for kongregate to get it'...

I've run into too many bad ads cycling through armorgames.com.

The game looks and sounds quite promising, but I don't think its really a 'Crush the Castle' game.

Anybody have anything to say about the second to last level on Minovia. It's kicking my butt.

Philip - I am having the same problem. The ones from the lower left are fine, but from the lower right, straight along the path - I can't seem to deal with the 70+ level attackers very well.

It's impossible to complete this level. Terrible gamedesign.

I got a gold medal on the second last level by funneling the left enemies to the start point of the right enemies, lining the full length of the path with 1 ballista towers on each side of the path. I never upgraded the levels of these towers.
I maxed gold, fire damage, range, balista damage and ballista firing speed upgrades.

I then added 3x wizard towers, maxed cold damage, maxed wizard firing speed for slows. I upgraded these towers.
I then added further wizard towers with the fire element as my main damage towers which I also upgraded. I am not sure whether maxed out electricity might be better than fire. I just stuck with fire.

I had 3 arrow towers on the map with cold damage just to ensure everything is always slowed.

I upgraded gold as a priority over other things early on (something like 4 gold upgrades then ballista damage x1, ballista firing speed x1, gold 5, then range, damage, speed, fire, cold, wizard firing speed.

anybody know what electricity does?

I was able to get gold on all levels. The 2nd to last one took me about 10 attempts.

The best strategy was a deviation from the one above and i'd like to give the credit to him :)

How come all the ads on this game are in German?

JIGuest: Electricity is supposed to add what is called "splash" damage in other games.

For those having trouble with the later levels:

There are so many TD games, but this one stands out. It is remarkably well-balanced.

I'm really enjoying this game. However, I have to say that I don't really appreciate the fact that all the female characters (that I've discovered so far) are vapid idiots who talk like the chics in that movie "Clueless." Maybe that's just a knee-jerk feminist reaction to what's supposed to be harmless humor, but I can't help but notice that all the men sound distinctly more bad-ass than the women. Just sayin.' Otherwise, can't find much flaw with the game, except that the more enemies are on the screen the worse it seems to run. Flash player crashed a few times trying to run this, not sure whose fault that is...

All the characters in the game have vapid personalities, regardless of gender. Prince Robin? They're all just silly monarchs who probably deserve to be overthrown. You're reading into it too much IMO.

Now, is there a general bit of advice for someone struggling to win games, much less get gold medals? I'm at the area following Gulan Plains and I can't even win the first one, and I had to really struggle with different strategies to get gold medals on the other levels. Is there one particular strategy that works really well? Walkthrough please!

Well, I've completed the game, winning a gold medal on my first try most of the time. I've played the final level several times, each time placing 8 Trebuchets with splash range upgrades and ice magic, to cover the entire enemy route to the castle and keep them all slowed. I filled up every other space with a different main tower type, to make the longest route to my castle so the enemies have to walk as far as possible. Here are my results:

Catapults are slightly underpowered. You can finish the final level with a gold medal, but only barely.

Trebuchets are very strong. Using fire magic, you'll kill most enemies before they even get close. Energy magic also works well, but it causes a lot of slowdown on my PC (probably from the combination of splash damage + extra hits from the energy magic.

Wizard towers seem underpowered, in comparison. I got killed by the second to last wave.

For an easy and quick gold medal, stick to Ballistas (fire) + Trebuchets (ice). The attack range upgrade from the quarry is essential. Upgrade the Ballistas twice; Trebuchets as your main tower only need one upgrade for great killing power.

The 2nd to last Minovia level and the last level were all Trebuckets all the time. Maxed the trebucket skills, max ice, max tower range. For the 2nd to last level, I lined the left side of the road then the right side of the road, then forced the left enemies up a 2nd line on the left with a narrow corridor between the 2 lines of trebuckets, then started filling in to the right side of the road with all the towers I could cram in that were in range of the road. I stopped and upgraded all towers within range of the castle at least twice. Easy win, even if it lagged out a bit. Needless to say, the lack of an ending, or even a thank you was anti-climatical and sad.