Looking for a little extra adventure in your mobile gaming life? 3D Methods has released another casual point-and-click title that follows the layout of The Haunt, Forever Lost, and the game's own spiritual companion, Cryptic Kingdoms. Instead of rattling about in a surreal fantasy world, though, Cryptic Caverns drops you in a dark and dreary island filled with an intriguing backstory and more than a few ancient mysteries to stumble across. 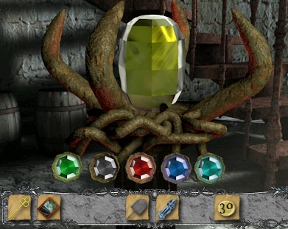 Ok, let's take an inventory of what's going on here. You're shipwrecked on an abandoned island. There's a crazy dude rocking back and forth in a cabin in the woods. You keep hearing stories about how there used to be an entire civilization on this hunk of land. And now, it's just you and some forgotten relics. Since you've got nothing better to do than wander around, picking up the odd item and solving puzzles, might as well have at it! Using the touch screen, simply tap where you want to go, tap to zoom in to certain areas, and tap to grab/use inventory items.

The layout of Cryptic Caverns is very similar to Cryptic Kingdoms, providing you with a "back" button to retrace your steps and keeping your movements confined to fairly small sections at a time. Expect a couple of hours of gameplay filled with puzzles that require logical but not necessarily easy to figure out problem solving abilities. There are a few irritating load screens that will make you roll your eyes like the spoiled modern gamers we are, but otherwise it's a lightly flavored and wholly satisfying casual adventure experience well-suited for success on your mobile device!

I can only get to step 48 on cryptic caverns , it won't let me go ant further , I've been trying for nearly 6 months or more , I've even resorted to using cheats and it still won't let me thru the door to step 48