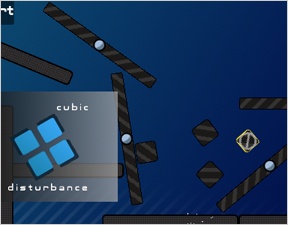 Explosions are fun. That's a simple fact, as far as I'm concerned. One of my favorite shows is "MythBusters" on the Discovery Channel, and Adam and Jamie have much the same view of destruction that I have: the bigger the explosion, the better. So, what could be better than a game based on explosions?

Tim Stadlet's Cubic Disturbance is just such a game. The goal is to get the yellow outlined cube to the bottom of the screen. The only way to do this is by placing bombs in various locations and letting physics do the rest. You have an unlimited number of bombs, and you can place them literally anywhere on the screen that you wish, even on top of other objects. The closer a bomb is to a movable object, the greater the effect.

Each bomb is equipped with a timer that can be set anywhere from .1 seconds to 9.9 seconds. By scheduling bombs in sequence, you can move blocks around the game field, one explosion after another. Some blocks, however, are not affected. One type are the immobile walls that make up the level. Another type are blocks with a circle/stripe through them, which can only be moved by interacting with something else in motion. Some blocks come tethered to others, so that, for example, if you drop a block on one end of the tether, causing it to lower, it will raise the block at the other end. Still other blocks are pinned to the level and act as balances, rotating on their stationary pivot.

Many levels will take quite a bit of experimenting to get right. You can restart the level at any time, move bombs around, change their timing, and test again to your heart's content. The ultimate goal is to complete each level using the fewest number of bombs. Just because you were able to scoot the block to the ground with 7 bombs doesn't mean that you couldn't have done it with 5. There are multiple solutions to many levels, which adds to the variety and fun.

Analysis: Physics games have always been a favorite genre of mine, especially when they operate smoothly and correctly. Cubic Disturbance does both of these things, and does them well. It doesn't take long to get a good feel for how bomb placement will affect a given situation, which can cut down drastically on the trial-and-error involved in solving the later levels. I appreciate being able to return to a puzzle and tweak my solution without starting the whole game over. Half of the fun is going back to the timers, adjusting them by just a fraction of a second, and seeing what ensues.

Two things that I think would make this game more appealing: bigger explosions and sound. When I say "bigger explosions", I don't mean the physical force. Right now when a bomb explodes, a few white particles limp a few pixels away from the bomb's location, which doesn't exactly match the force that the bomb is generating. Something a little more impressive wouldn't go amiss here. Of course, when you think about explosions, you also think about the sound they make. There are no sound effects in Cubic Disturbance, which I think is a bit odd for a game about bombs. I have been known to make my own explodey sounds whilst playing the game, but a few bangs and booms would make the experience so much better.

Cubic Disturbance is a challenging physics game with a fun premise. If you like making things explode, then this game might just be for you. Just watch your hands and fingers there! (And for more destructive physics fun, try Ninja Kiwi's Boombot.)

Good game but it's a little glitchy. Several levels where pulleys are involved, the pulleys disappeared. Also, levels with falling blocks sometimes started with the blocks already fallen, making it impossible to pass. These frustrations had me quitting at level 13.

The UI is just plain HORRIBLE.

There seems to be some random component to the physics model. I've started the exact same set-up three times in a row, and the blocks moved slightly differently each time (in particular, the friction brought the golden cube to a stop in very different places).

For a game so much about fine-tweaking of set ups, they should have made sure that the physics model is very consistent...

An apparent lack of save feature is very disappointing. I accidentally closed the window and have to start from scratch...

Syntax,
The game automatically saves your progress, you can chose the level you want to start from on the 'level select' screen, just click on the circle as the game tells you.

An auto level save feature would be a major plus. Having to start from scratch kills the replay value for me.

That aside, I enjoyed the game. I have only done 6-7 levels so far.

I'd suggest first timers take a minute to look over the first three levels in the walkthrough link on the start page. It will decrease your learning curve and raise your score exponentially. I didn't realize that "target" looking object on some of the later levels was desirable to hit until I saw that in the walkthrough.

@Anonymous - Thanks for the info about how the save works.

There is no box on the 6th level!

@Nathan: It is sitting on the middle platform of the level. It is marked as a box that cannot be moved directly with bombs, though, so you need to come up with another way of moving it...

Too many bugs. Not ready for release.
Example 1: Restart doesn't fully reset the state (see the comment above about level 13).
Example 2: Activated timer UI doesn't vanish when start is clicked.
Example 3: Timer bar can vanish off top of screen when bomb placed high.

(a different poster than the "nobody" above)

A significant UI flaw: without a doubt, clicking on an already placed bomb should bring its timer window to the foreground and leave it there until you click somewhere else. As it stands now, a bomb placed below another one will have its timer number permanently obscured by the other bomb. Even worse, since rollover will activate the other bomb's timer window, it's possible to place a bomb whose plus or minus control for the timer is impossible to click. Did the playtesters just never use the timers?

I need help on level 23.
It seems the seesaws within the box maze thing fall immediately instead of staying on their fulcrums and therefore the puzzle is unsolvable, unless I'm looking at the wrong solution.
...
Wait, nevermind. After quitting and starting again (3 times) it finally loaded the seesaws properly.