Om Nom returns, hungry as ever and with more puzzles than you can shake a rope at. Zeptolab's continuation of their hit puzzler Cut the Rope was previously released for iPhone and iPad and is now available on all your favorite mobile devices. Cut the Rope: Experiments includes 125 new physics puzzles set across five new settings in a professor's laboratory. The goal from the original returns: get the candy into Om Nom's mouth by slicing through dangling ropes and utilizing environmental objects. Old favorites like bubbles, whoopie cushions, and automatic ropes return in addition to new tools like rockets, suction cups, and projectile rope-darts. 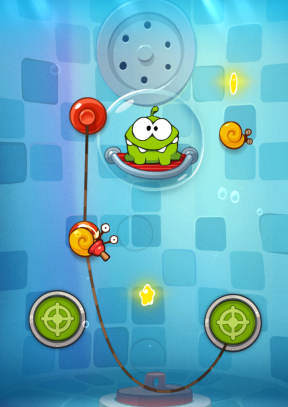 The gameplay will be familiar to those who have played the original. The first set of levels is a comprehensive recap of returning mechanics. The following sets each introduce a new kind of object to the puzzles. Ropes attached to suction cups can be touched to release them from the background and then re-stuck, allowing for far more mobility than in the first installment. Dart ropes can be fired at the candy to catch them from free-fall, and bottle rockets provide forward propulsion. Gameplay has moved past free-fall physics to a full, open physics puzzle experience. Social elements including achievements, leaderboards and hidden photographs that can be found and shared on Facebook have also been added.

The new objects and characters are interesting on their own, but many levels may feel too familiar to returning players. The weight and buoyancy mechanics are especially fun to play with, but most exciting puzzles are those that combine all the new tools. Aiming rockets at automatic ropes and using darts to prevent the projectile from defusing underwater is quite the challenge. The promise of more levels is enticing given the quality of Zeptolab's new levels for the original. If you felt like something was missing from the first game or just can't get enough rope-cutting in your life, this one is worth picking up.

For me the "Cut the Rope"s are my all time favorites on mobile.