Congratulations! You're officially the worst babysitter ever. When Monica, the little girl you're supposed to be driving to her grandmother's house for a friend, gets kidnapped by evil forces in a gas station, you find yourself embroiled in one very strange family with a tragic past that just won't stay dead. Dark Alleys: Penumbra Motel is ERS Game Studio's first pure adventure game that attacks its horror with such high camp and magic ghost dogs that it never really becomes scary, but is still a gorgeous and engrossing creepy experience to sink into. Just remember kids... if you absolutely must go into dark gas stations by yourself, for the love of whatever don't wear pigtails, carry a teddy-bear, and skip as your primary means of transportation. It's like wearing a big sign that tells the universe "Please kidnap me!" 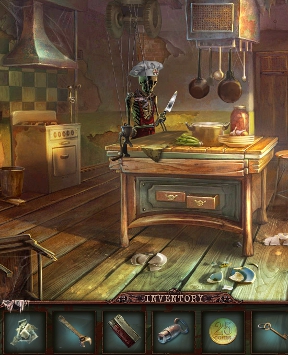 Penumbra Motel has three difficulty modes to choose from, though the gameplay is relatively constant throughout. You'll explore the area, gathering items you need to solve various puzzles or get past obstacles. Your diary will keep track of current events and goals, as well as any important clues you'll come across for future reference, and the handy-dandy magic television on the opposite side of the screen will let you get a hint when you're stuck or skip puzzles. Turns out the area has a rich history of military heroes, cultural significance, and murder, and some spirits don't lie quietly. If you want to rescue little Monica, you'll need to put on your thinking cap to solve a wide variety of problems and bizarre puzzles. Or maybe you could just pick up another kid from somewhere and her parents won't notice. Kids are like goldfish, right? You can't really tell them apart. It would save you a lot of trouble, and drastically reduce your odds of "bloody murder by vicious old man ghost". 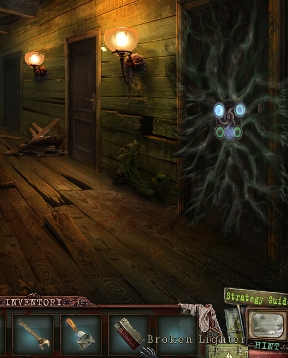 Analysis: Unless you're the sort of person who is scared by Halloween masks and wondering who was phone, Dark Alleys: Penumbra Motel is too over-the-top goofy and gleeful to be scary. From the big, overly dramatic "evil dark lord" laughter to the seething masses of darkness and eyeballs blocking doorways, this game is a trip. Largely a pretty good one at that. The story is morbid, but so packed full of evil, wacky mysticism you really only have to worry about the occasional jump scare. The area designs are seriously creative, and a real joy to explore. Flickering lights, rich use of colour, otherworldly occurrences all combine to create an atmosphere reminiscent of a particularly surreal Tales from the Dark Side episode, and it's a lot of fun to experience even if it never feels particularly deep. It's the perfect choice for people looking for a really casual gaming experience with the sort of polish ERS delivers, but without all that hidden-object hunting you might not care for.

Since Penumbra Motel is essentially a straight-up adventure game with nothing so tedious as a hidden-object scene to bog you down, the gameplay moves at a brisk pace. Unfortunately, that also means you'll encounter a lot more frustrating adventure game concepts, like gathering up multiple items for a single task that shouldn't even be an obstacle to begin with, obscure object uses, and a lot of backtracking. Luckily, the game features a lot of puzzles and some fairly imaginative versions of them, leaving you challenged but rarely outright stymied. As an experimental foray into the world of straight adventuring, Dark Alleys: Penumbra Motel succeeds more than it fails and delivers a cheesy, highly detailed, cinematic experience fans of schlock horror will enjoy. As always, try the demo and see if it whets your appetite before you buy, but if you're a fan of ERS and are looking for something to fill four hours or so, you can do a lot worse than this campy adventure.

Chapter One: The Gas Station

Getting the Doorbell Button

Getting the Paper Clip

Opening the Path to the Hotel

Getting to the Cinema

Getting Rid of the Dog

Picking up a Brass Horn

A Bunch of Keys Obtained

Getting a Box Key

Chapter Four: The Road to the Mansion

Getting into the Mansion

Getting Another War Medal

Taking a Tie off a Bear

Chapter One: The Gas Station

Getting the Doorbell Button

Getting the Paper Clip

Opening the Path to the Hotel

Getting to the Cinema

Getting Rid of the Dog

Picking up a Brass Horn

A Bunch of Keys Obtained

Getting a Box Key

Chapter Four: The Road to the Mansion

Getting into the Mansion

Getting Another War Medal

Taking a Tie off a Bear