Once again the hunt for Dark Dimensions has begun, which is either a place for such emotional angst that the collective anguish has collapsed in on itself and created the most depressed black hole in the universe (and where Sisters of Mercy will launch their next world tour), or just a little town in the middle of nowhere where something so dreadful has happened that the misery lingers (like aging Goths) and the local spirits cannot escape. In both cases you're looking at the once charming hamlet of Phoenix Hill California, the setting for the next hidden object adventure by Daily Magic Productions, Dark Dimensions: City of Ash. 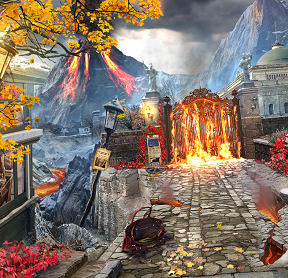 Phoenix Hill has been destroyed by a volcano which, while killing quite a few folks, managed to leave the town miraculously unburned and un-covered-in-ash (take that, Pompeii!). The ghost of Audrey Owens, a young activist who attempted to save the town from its perilous fate, is your guide as you search for the reason why in 1956 the volcano suddenly became active and wiped the place off of the map. What caused this horrible disaster? Perhaps the relationship between Audrey and her father, who is both the mayor and the world's worst dad as his spirit tries to justify whatever it was that brought this disaster down on their heads and wiped out so many people. Ain't that just like a politician? 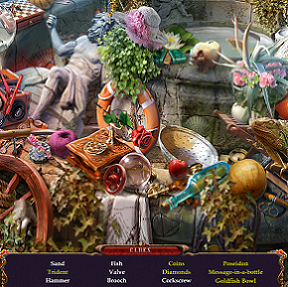 Dark Dimensions: City of Ash features everything you've come to expect from a first-rate adventure hybrid including a convenient bottom-loading inventory, the standard "detective notebook" in which to keep track of the story and various clues, a refilling hint feature, and an easy to use map which doubles as a way to instantly transport from one scene to another. Glints and sparkles indicate places of interest, along with a changing cursor as you point-and-click your way through the amazingly well-preserved town populated only by a few animals and a lot of sullen regret.

Analysis: If you thought Dark Dimensions: Wax Beauty was fantastic over-the-top fun, brace yourself for more: more camp, more dark secrets, and even more gloom and doom than at the last Nine Inch Nails live show. Daddy dearest is especially hilarious with his constant refrain of "I did it for youuuuuuuuuuuu, Audrey!", attempting to justify actions which demolished a lot of lives, including Audrey's. Dark Dimensions is a vehicle that contains a lot of entertaining gameplay and even more wallowing in the Sturm und Drang happening in the background. 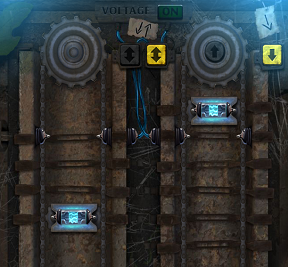 Daily Magic Productions has produced their usual top-notch effort with Dark Dimensions: City of Ash. The scenery is hauntingly crisp, the gameplay smart and challenging, and the animations blend smoothly with the scenery. The regular, list-style hidden object scenes incorporate a lot of interaction and mixed in is the occasional "silhouette-style" HOG scene for variety. The puzzles are a mix of old and new, and tend to lean heavily on physical sliders. The voice acting ranges from good to meh, and the ultimate bad-guy is a bit standard, kind of a let-down after all of the heavy father-daughter turmoil. As for the believability of the plot, well, seriously, a gold mine causing a volcanic eruption? Lava flowing through a town that doesn't cause the buildings to immediately flash into flame? A volcanic eruption that doesn't seem to produce any ash, and is still going on 55 years after it first began?

Dark Dimensions: City of Ash, with its three levels of gameplay, addicting puzzles, and involving (and unintentionally hilarious) storyline, is at the end a fantastic way to waste several hours, whether you wish to wallow in the drama or laugh at it. Easy on the eyes and challenging for the brain, this is definitely something to look for in the hybrid adventure genre.