Look, if you're a citizen in the fairy tale kingdom, we all know there's a lot to be afraid of out there: wolves who don your granny's bonnet and try to devour you, vain snow queens who trap children and turn their hearts to ice, ten ton giants atop beanstalks who hurl planetary chunks at your village. But the worst of all? Flowers. You heard me right. Because what do flowers have that is more heinously torturous than all evils combined? Pollen, buddy. Pollen. Your nose is spasming at the mere thought of it. Now, as the Fairy Tale Detective, your mission investigating the hows and whys of deadly pollen attacks leads you to something darker, tangled even, a little more "feed me, Seymour" in the tale of a girl with really really long hair—Dark Parables: Ballad of Rapunzel. Conveniently, despite a whole cast of characters all trying to save their own hides and those of their loved ones, it's up to you to explore this deceptively gorgeous world, collecting and piecing together artifacts to open chests and doors, until you get to the bottom of the mystery in this hidden object adventure from the artistic creativity of Blue Tea Games. 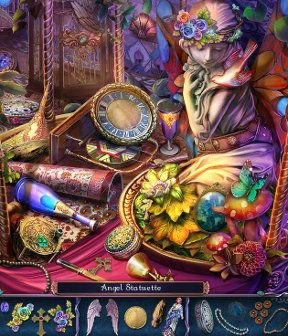 If you've played any of the other Dark Parables games then you know what to expect here: lush visuals, sumptuously colored, all bundled up with the highest of high quality production values. Sometimes sequels are known to let you down but, despite being somewhat predictable and formulaic, there's not much to complain about in Ballad of Rapunzel. The fragmented-style hidden object searches for which Blue Tea Games is known are just as beautifully designed. Players who dislike messy piles of random objects will encounter none of that here, but make no mistake, the crux of the gameplay involves searching out needed items then figuring out where and how to use your inventory in order to carry on the adventure. These richly ornate objects will either open doors to new areas, unlock a piece of the story, or initiate one of the many tactile puzzles to solve. An interactive map will help you keep track of objectives while optional side quests for collectibles and achievements will ensure everyone has lots to do. Altogether, Ballad of Rapunzel is the perfect balance between adventuring, story elements, hidden object scenes and minigames. 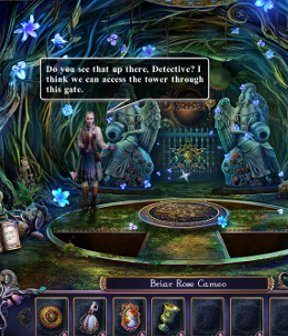 While the story is based on a blend of familiar fairy tales, Blue Tea does a good job of taking the familiar, twisting it up and infusing it with original ideas. It does tend toward some campy melodrama but this just adds to the adventuresome feel, keeping action and excitement running throughout the game. It also makes for a decent sized game: depending on the difficulty settings you choose, whether you take your time solving puzzles and enjoying the dialogues and cut scenes, the main chapters in Ballad of Rapunzel should take around five or so hours to complete. It is best to relax and enjoy a slower pace, anyhow, because there is a fair amount of backtracking in some chapters as you return to unlock doors you nearly forgot existed. Besides the fragmented object searches and minigames, there is so much to feast the eyes, so many new plot twists to take in, and plenty of adventure based puzzles to make the whole experience feel epic. With flowers everywhere you look, the looming threat of attacking pollen, it's probably a good idea to keep those allergy tabs nearby, also. You know, since herbicide apparently was banned in Rapunzel's world.