Ah, the Victorians. There are many tropes from their literature that still haunt us today, including eerie women dressed in white appearing at lonely intersections, pale, blood-sucking gentlemen in evening attire, and dark-skinned men wearing turbans. Perhaps the greatest of the era's paranoias was the thought of being buried alive, which permeated the culture to the point of having little bells and pulls installed on coffins. That fear was encapsulated in one of Edgar Allan Poe's great stories which has now been turned into a stunning adventure/hidden object hybrid, Dark Tales: Edgar Allan Poe's The Premature Burial. Yes, ERS Game Studio is back with their third adaption of a Poe story, and this one is a killer! (sorry, bad pun) 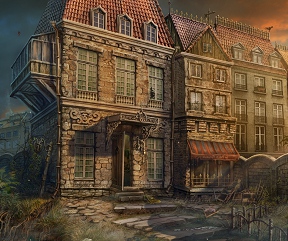 In the third game in the Dark Tales series, Detective Dupin has been hired by a desperate man, Julien, who has lost the love of his life, Victorine. Unfortunately Victorine was married to a very wealthy older man and the family buried her in secret, not allowing poor Julien to know where her final resting place is. Haunted by a vengeful dark-haired specter the Detective and his sidekick the player must talk Julien back from the edge of suicide, track down Victorine's resting place, and solve the mystery of the spectral woman who haunts the town. All of this can be accomplished by finding hidden objects, solving puzzles, playing a wide array of mini-games, and speaking to the inhabitants of the gorgeous, run-down French town where the action takes place.

Dark Tales: Edgar Allan Poe's The Premature Burial is a basic point-and-click adventure where everything is accomplished with the click of a mouse. Exploration is facilitated with a changing cursor to indicate areas to explore as well as showers of sparks to indicate places of interest. The game also includes the obligatory detective's notebook to keep track of clues, a scrolling inventory of items that have been collected, and a refilling hint timer that also allows for the skipping of mini-games after a certain amount of time. 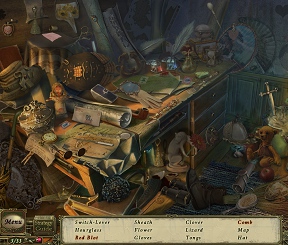 The artwork is gorgeous, a mixture of quaint and run-down locations that create their own spooky vibe even without the animated creepy-crawlies and ghosts wandering around. The soundtrack is hauntingly lovely and matches the mood of the game perfectly, which makes The Premature Burial a feast for both the eyes and ears. The wide array of hidden object scenes, puzzles, and mini-games is also a treat for the brain, being a nicely mixed lot of the familiar and the new. Hidden object scenes are made more interesting with the addition of interactions to complete them, and the mini-games are a nice balance ranging from easy to difficult. 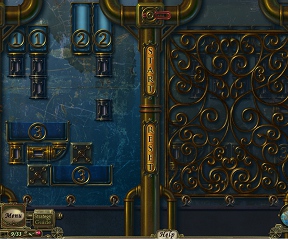 What makes Dark Tales: Edgar Allan Poe's The Premature Burial though is the central story and mystery, which is revealed as the player reads convenient newspaper articles and chats with the reprobates who populate the town. While the story is gripping, the voice-acting and dialogue of the conversations can be occasionally clunky, which is a minor thing in the overall big picture of the game. Other minor faults are the navigation areas being too close to the inventory and the occasional strange description in the hidden object scenes.

What the casual gamer is looking at with The Premature Burial is a creepy story, hefty gameplay, and a lot of spooky fun. Dark Tales: Edgar Allan Poe's The Premature Burial is great fun for fans of the adventure/hidden object horror genre with two modes of play and an engaging story to discover. Can you locate Victorine's final resting place and solve the mystery of the dark-haired woman before poor Julien succumbs to his suicidal depression? It's definitely worth playing to find out.

A Collector's Edition is also available. It includes wallpapers, an extra adventure, the soundtrack, screensavers, and a built-in strategy guide. Remember that Big Fish Game Club Members pay only $13.99 for Collector's Editions (or 2 club credits), and collector's editions count 3 card punches of 6 total needed for a free game.

Wow, is that Liquid Measure in the last screenshot?

Lol, your right SonicLover and I heard that a Doodle God like puzzle was in another, coincidence?

Yes that is Liquid Measure!

There is one Liquid Measure-like minigame with four levels.

Good review except that it is really hard to keep up with so many facts from an age long past.  As I understand it, in regard to the "paranoia" of being buried alive which they had, it was actually mostly a reality in Ireland and Scotland when people would go into an inebriated comma which was mistaken for death.  They had discovered to their terror, when having to remove coffins to other grave sites, that the insides displayed scratch marks from the people who had awakened from their commas.  Thus, the bells were strung on graves; where the expression "saved by the bell" came from.  There are variations to what the phrase means, but the other phrase which, sadly, came when one had not been found in time was possibly "dead ringer."

True, there might have been rare instances that actually happened, but the paranoia swept the western world and became so pervasive that Poe wrote the story. The original "The Premature Burial" is about a man who becomes so paranoid about being buried alive he completely isolates himself and no longer lives any kind of life. A rather cautionary tale, really, about letting fears rule your life.

How do I get to the voodoo shop? T_T

I can't seem to find the paint brush. I have the paints but no brush. Can anyone help?

I too have no paint brush; scanned each strategy guide page to see where to pick it up, no deal. It did not come with the paint set.

I have looked everywhere for the paint brush and am so frustrated! I am going to quit and try and different game. :(

The paintbrush is in Julien's room. (I think). I've just started the game but I got a paintbrush of the ledge when I looked at Victorene's portrait on the wall.

where can i find a TRUE walkthrough, not a overview of the game?? i'm stuck and can't get back where i need to go and can find NO PLACE to help.

Where is the crystal in the HOG game, please?

I found the crystal on the upper right side of the HOG in the dagger BUT it won't allow me to take it out and my hint says there is nothing more to do there. So I'm nixing this as another game with glitches and am glad I saved myself the purchase.

JIGuest -
Check the walkthrough posted above the comments to see if you might have missed a task.

Hello, i'm at the lost & found section and i need a code to open a box. the code is 8*7*1 (the * stands for an unknown number, it's a 5 digit code) the bottle is filled with wine and i can see 4 fingerprints but i can not understand the code. can you help me?

The digits are 85781. You'll see a smudge on one of the prints...because it's been pressed twice.
Can anyone then help me find the bone for the dog????

The code is 85781. You see a smudge on one the prints. Because it's been pressed twice.

Back to me now;o) Can anyone tell wher to find the for the dog???

I was liking this game at first... however half way in I am finding that it is not very intuitive. I keep having to exit the game and look at the walkthrough. Also, some of the clue names are wrong... ie "water can" turns out to be a funnel, and "comb" turns out to be a brush. I am not really impressed!