Deadly Sin 2: Shining Faith is a role-playing game that begins by throwing you into the shoes of Carrion, a soldier in the Imperial Army who's currently busy trying to keep enemy forces at bay so that the civilians in a castle under siege can safely escape. How did he get there? How much do you have to hate your kid to name him "Carrion"? Who are the people helping him? Well, after a dramatic escape (maybe), you'll get a chance to find out, as the story jumps backwards in time and things begin the good ol' fashioned way; with a whole lot of monsters, treasure, and side-quests. And if you didn't play the original Deadly Sin, soothe your fretful brow, since the stories are completely separate. 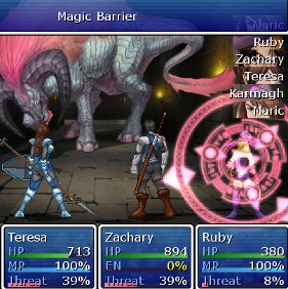 Battle is (you guessed it) turn-based, albeit with a few additions. During battle, you can take as long as you want to decide what each character does, and a handy sidebar on the right of the screen shows you the order in which everyone (including enemies) will attack, letting you plan your method of attack somewhat. Which you'll want to do, since the game makes use of a "threat" system; simply put, if you keep attacking with one character over and over, and that character keeps killing enemies left and right, their "threat" rating goes up, and you'll find that they'll become the focus of most enemy attacks. Get sick of battling? Then track down the "monster nodes" in each area and just shut them off.

When your party members level up after gaining enough experience, stats like strength increase automatically, but you can manually assign skill points via the game's menu. Each character comes with a unique set of skills, and putting points in them not only unlocks them, but makes them more effective. Not enough customisation for you? Then give augmenting a try, which allows you to attach certain items to your weapons and armor for various benefits. If all this sounds confusing to you, don't worry; shortly after the game begins you'll gain access to a tutorial house that can explain everything in depth.

Analysis: Chances are you took one look at the screenshots and the genre and formed your own opinion; games made in the style of Japanese RPGs are a love-it-or-hate-it breed, and they're either your "thing", or they set your teeth on edge. Deadly Sin 2: Shining Faith is "just" a turn-based RPG, sure, but it's a very well made one, and if you enjoy the genre you'll find a lot to like here. You'll explore a large world with a wide cast of characters, solve problems big and small, and experience angst by the bucketload. (It isn't an RPG unless someone has daddy issues.) But it's all so well done, packaged in a beautiful design with a rich soundtrack. 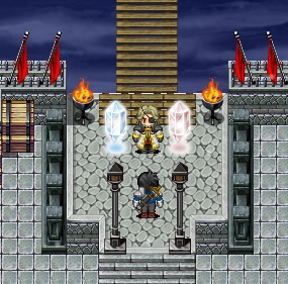 You can expect to find a few simple puzzles in the dungeons you'll traverse, but this ain't Brain Lord. Much more emphasis is placed on trouncing monsters and advancing the plot. Story-wise, the game is definitely enjoyable, as long as you don't expect or need it to blow your mind. Yes, of course there are going to be familiar character archetypes, and you can expect crosses and double-crosses and noble sacrifices. In general, the plot is well thought out and the writing is mostly good, despite a frustrating tendency early on for characters to woodenly deliver chunks of exposition for the player's benefit.

But despite all the extra accoutrements added to the battle system, the game isn't actually as complicated as it seems. Shining Faith is exceptionally generous with loot, chucking multiple treasure chests at you at a time, and it's ridiculously easy to both level up and equip yourself with all the best items as a result. Pick the right support skills and you'll probably only rarely need to purchase healing items too, since you trip over those every time you turn around. Look, I know it's important to make games accessible to everyone, but should you at least feel like you have to sing for your supper a tiny bit? As a result, what you wind up with is a queer sort of RPG that on the surface contains enough extra gameplay bells and whistles to mildly intimidate newcomers to the genre, but also might be a bit too easy for veterans.

Is it worth the price tag? Well, personally, I say yes. While it doesn't do much to shake up the genre, I've never believed that you have to reinvent the wheel to have a good time. Deadly Sin 2: Shining Faith is incredibly well-made and offers a lot of play time for your buck. The 30+ hour playtime promise might be a bit of an overestimate for most players unless you're the sort who feels the need to max out every skill and track down every treasure chest, but you can still expect to be involved for a good long while.

I must say that it's extremely low trying to sell a game with tilesets from both the RPG Maker VX runtime package and the free tiles from Mack. If you're going to sell a game, make sure you use custom graphics and don't break copyright laws. The developers didn't even care to make a custom windowskin or even enemies - The enemy shown in the screenshot comes with the RPG Maker VX program.

[So far I'm not convinced that this developer has violated any copyrights. Your comment seems to make that accusation. -Jay]

Purchasing rpgmaker VX allows you full commercial use of the run time package. Just about every RPGmaker game sold commercially has used a significant amount of the RTP resources, many to a much greater degree than in Deadly Sin 2.

Really this doesn't seem to be much of an issue with folks outside of the tiny RPGmaker community. :P

A Brainlord mention? Wow. I still tell people about that one.

The content is there to be used. RPG Maker VX isn't a free program; it costs sixty dollars. If you buy the program, you are free to do as you like. I also don't see anything under Mack's copyright info/FAQ forbidding people from using the resources in commercial games. Mack is also credited in the readme appropriately, links and ToU included.

Would it have been nice to see all new tilesets and monsters? Sure. But I would also have expected to pay more money for it then, and to see it completed much, much later. Visuals do not make up the lion's share of game development. To say a developer "doesn't care" without considering the MASSIVE work that has gone into scripting, writing, and creating all of the CUSTOM visuals is insulting.

... also, chnc.vegas wins todays internets for knowing what Brain Lord is. Fist-bumps for you, my friend. (o_o)-o

The review appears to be missing the 'windows' tag.

I have never even heard of Brain Lord until I read this review :D

Yes your comment on me force-feeding lewts to the player is well-deserved. Shameless, I know. But an important part of being able to complete the creation of an RPG is being able to stand playing it. And since I am a lewt hog, it helped me stay motivated during testing. XD

Excellent review, Dora, and I will love you until the end of time. Thank you.

While it is aparent you can miss the Ten of Hearts (thanks to that one NPC that us "talk-to-everyone"-loonies will stumble upon), it is not as readly aparant that the same can happen to the King of Hearts.

Or am I wrong, and can I return to the zone where the ten minute siege occours? I was too caught up in a very stupid defence plan to ever imagine there were chests down in the maze... :P

Dervon, you can't actually return to the battle zone, so you'll have to get the King during that battle. Just power through the middle of reach the very bottom of the map. :D