Dear Esther is an interactive story told through a first person adventure setting. There's very little gameplay to speak of, just a deep mystery about the deserted island you're walking on, along with unanswered questions surrounding a horrific crash and a book written by a long-lost explorer. What happened in this dreary place? And, better yet, can you find a way out? 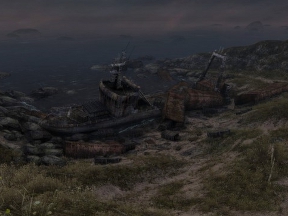 Talking too much about the plot of Dear Esther ruins half of the experience, so this article is going to remain delightfully spoiler-free. All you need to know is that the game follows a standard first person control layout, using [WASD] to march around and the mouse to look at things. You can't jump, you can't run, you can't pick up things and stash them in an inventory. All you need to do is walk around the island, investigate the sights, and breathe in the story.

Dear Esther began as a mod for Half-Life 2 back in 2008. It received almost universal praise for its design and atmosphere, sparking an overhaul that improved the graphics and tweaked the level layouts. The project continued to grow until early 2012 when the completed version, reviewed here, was released. 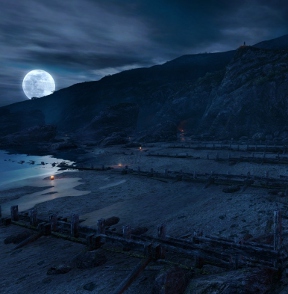 Analysis: Dear Esther is a slow game that doesn't try to satisfy your craving for action, high scores, achievements, or bacon collecting. It's an experimental, minimalist game that focuses on storytelling and light exploration, giving you the chance to settle down for an honestly intriguing tale. Everything from the writing, voice acting, and linear walking paths keep you focused on the story at hand. Dear Esther is an empty world, and because of that emptiness, you'll find it easier to step inside the protagonist's shoes and experience the game first hand.

Citing any faults in Dear Esther is tricky, as most of what players would consider drawbacks are intentional limitations imposed to keep the game (and the player) focused. The walking speed, for example, is barely faster than a crawl. Any faster, though, and you wouldn't notice the little details strewn about the land. The path you follow often feels like a simple walk from point A to point Z, but there's no puzzle to solve or task to complete, so you're not supposed to worry about things like that!

Dear Esther is an unusual experience, but it absolutely succeeds at what it sets out to do. Atmosphere, setting, emotion, and story are the pillars its world is built upon, and as soon as you start the game and see that flashing red light in the distance, you'll want to see it through to the end. There's only about two hours of play time, but if you kick back with the lights low and headphones on, it's better than any movie you could see.

I don't like it. I'm expecting there is something deep below the poetry narrative this game tells but... when I realize what is it all about, it feels swallow. don't look at the spoiler if you want to play the game...

The player, which I'm not sure alive or dead, is haunted by guilt. He got drunk driving and hit Esther, which I assume... dead. This mean the entire poetry narrative is just a rambling...

Art and sounds wise, they are detailed but I know few games that for me better. Half life 2 for example, sometimes make me stop and look at the vista instead go on killing zombies.

Rosedragon: That's just one interpretation. Another is that

Esther was the narrator's wife, and that Paul was the drunk driver, or that drugs were involved, or that even the car accident is a metaphor

That's the appeal of the game, it provides a basis for speculation. It doesn't tell a story from beginning to end, it offers bits and pieces, and how you put them together is up to you. There are also random elements, different speeches you receive on subsequent 'play'-throughs, and even changes in the details around you, including

shapes and figures in the distance

you don't see or notice every time

1,412 Views
0 Comments
chrpa— Jayisgames needs your help to continue providing quality content. Click for details Welcome to Mobile Monday! One of the funniest games for mobiles, escape puzzler by itach lab (Usami Kenzo), is back and as good as its prequel. K3...  ...

Multiplayer Computer Games For Fans of The Apocalypse

1,057 Views
0 Comments
jayisgames.com— The world has changed and large gatherings have been avoided for quite some time now. It is understood that people are cautious about physical meetups due to the hazard of being exposed to the COVID-19 virus, even with the mass...  ...

954 Views
0 Comments
jayisgames.com— Splitgate is a first-person shooter that tries to answer the question, "What if the classic PC game Portal was turned into a multiplayer shooting game?" Let's take a look at how the game is really played. We'll cover the types...  ...

Legends of Snooker: One Shot Review

1,149 Views
0 Comments
jayisgames.com— If you've been looking for a new game to help you relax at the end of your workday or to get your mind off the daily tasks that seem to take over, look no further! Legends of Snooker: One Shot...  ...