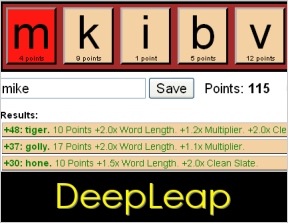 It might not look like much at first – OK, it doesn't ever look like much – but the unassuming DeepLeap might well be one of the best pure word games to grace the internets in quite a while. Javascript guru John Resig dabbles in game design, combining the basic gameplay of Scrabble with the sweat-inducing intensity of Text Twist in this fast-paced word-forming game.

You are presented with a constant stream of letter tiles, which you must quickly dispense with by forming words of 2 letters or more. A word's score is the sum of the values of the letter tiles (much like in Scrabble), multipled by a number of bonus factors. Earn these bonuses by submitting longer words (+0.5x for each letter above two), maintaining a streak of validly submitted words (+0.1x for each word in the streak), and clearing your queue (2x bonus). You must act quickly, though, for if the queue ever reaches nine tiles, a timer activates and the first tile in line starts turning red. If you don't submit a word in the few seconds before the timer runs out, that tile disappears, its point total is subtracted from your score, and worst of all, your streak bonus is reset!

Fans of leisurely, puzzle-like word games may find DeepLeap too fast-paced and may feel tempted to head directly to the Jumble. But before you go, give DeepLeap a shot! I myself normally choose stress-free puzzle modes whenever they are available, but I found this game remarkably addictive, and here are some of the reasons why:

It's accessible! Whether you have the vocabulary of a member of the Decemberists or that of a fifth-grader, you should be able to find words to submit without too much difficulty. You don't ever have to let the queue fill up — if you see a 3- or 4-letter word in the tiles that are already up, just go with it! Keep that ever-important streak going! Of course, it's better for your score if you're able to hold out for longer words, but it's not like you ever have to find a 9-letter monster. Also, DeepLeap doesn't make you feel inadequate if you didn't know that fragments like CEL and AWL are actual words.

It's balanced! DeepLeap is both offensive and defensive. Sure, it's great that you are able to submit SPHINX, but if it leaves you with EEO in your queue, then maybe you're better off playing something something like POXES and leaving HINE – giving you a much better chance of clearing your queue with your next word. It's designed never to give you more than 3 vowels or 4 consonants in a row, so with some care you can avoid ending up with draws like AIEUUUBAI. On the other hand, this is exactly where the 2-letter words come in handy as panic buttons.

It's fun! If the first two games that come to mind are arguably the world's most popular word board game (Scrabble) and the most popular word video game (Text Twist), you can probably assume that it's captured at least some of what's made those games so popular, which this definitely does.

It's addictive! The short but intense nature of DeepLeap combined with virtually unlimited replay value make it oh-so-easy to finish a game, take a deep breath, and then jump right back into the maelstrom. This is sometimes known as the "just one more game" syndrome.

Now, that's not to say that DeepLeap isn't without its problems, and since John Resig currently presents it as a demo, I feel no hesitation in pointing them out for the greater good of the finished product: First of all, the letter values are definitely out of proportion, meaning that not only are words containing Q, X, or J pretty much guaranteed to be worth as much as most words twice their size, but if one of these letters shows up in your queue, you'd better do your darnedest to get rid of it, or pay a stiff penalty!

Secondly, the timer needs to be more visible, especially when your queue is full and you're trying frantically to find a word while simultaneously attempting to discern the subtle differences between crimson, cherry, and carmine.

Lastly, the tile timer could stand to be a little slower as the queue fills up; after all, the possibilities for forming words are increasing exponentially, so it would make sense to give the player more time to process the new letters.

Although DeepLeap is currently just a demo, I see very few other flaws. Part of the greatness of the game lies in its simplicity, and I don't see that adding new gameplay features like powered tiles could really improve it. Music, sound effects, and eye-pleasing graphics would certainly add a bit of polish, but that would just be the rainbow sprinkles on top of an already-delicious ice cream sundae.

Great game, but I found it to be very buggy (mac using firefox 3.0.9). Very often I'd be unable to submit a word by pressing 'enter', and once it just started submitting random selections of letters for me. I was happy when I saw that this was javascript and not flash, but I can't really play it how it is. I'll try Safari.

It would be infinitely more helpful to making words if the Q came with a default U tacked on to it. It's rare to find a word that doesn't have that spelling convention, and you take a chance of fobbing an otherwise great game by frantically juggling or losing points while waiting for that sainted U to drop in.

Otherwise, I can confidently say that this game doesn't just kill time--it maims it, mangles it, defiles the corpse, dismembers it, and then reanimates the bits so it can kill it again.

This is pretty good as is. It would be nice to be able to select your speed.

Denita TwoDragons - a Q is always supposed to be followed by a U, according to the DeepLeap Twitter account. If that didn't happen for you, then there's probably a bug somewhere that I'm sure John would be glad to know about.

Excellent little time waster. This was a nice change from Gemcraft 0 which I have played without stopping since it came out!

Funny, I'm yet to get a Q, although several times I was stuck with lots of consonants when I got 4 in a row followed by a single vowel followed by 4 more consonants. I tend to over think a bit!

I must commend you on your reference to the Decemberists. And by the way, I just played "palanquin" for 482 points.
JK :P

Seems to occationally freak out when I use it in firefox.....will start automatically submitting letters. Other than that its a fun little mind bender of a game.

Heh, I think PALANQUIN would be worth a lot more than 482, there Briguy :)

But for your next trick: PACHYDERM

Games/Tiles need to be truely randomized, otherwise people like me will end up gaming them :D

Err... that last redundancy (pasted without looking!) was supposed to be this link to the screenshot.

samalakar - I was thinking about mentioning that as a drawback, but having true randomization comes with its own problem: high scores would be dominated by games with a large number of rare letters. A solution might be to require values of the random letters to add up to a certain total, although you might run into some letter balance issues. Or perhaps use the same letters for a given #game, but randomize the order.

Right now it seems moot, though, since there are no high scores kept.

Love the pressure based word games. It's a great concept and I'd love to see it further developed.

I got an odd bug wherein all the letters dropped at once and then the 'game over' screen popped up endlessly after one letter turned red right as I submitted a word. This is the only time it's done this though.

i kept getting strings of lll then one vowel, then more lll.
that kinda annoyed me.
but i love the game, i can tell my geography homework may be put-off quite a while until ive played this a million more times

What is the save button for in Deepleap?

Deep leap won't keep score for me. We've recently done a system restire. Am I missing something in Task Manager? Or is the fuss about Java Script a problem for keeping score?

What fuss about JavaScript?