If you want all the drama, passion, suspense and intricacies of the courtroom, the best way to get it is to go to school, study really hard for several years, then bribe—Nah, just kidding! You can easily get your fix by watching TV, reading a bunch of fiction books, and playing games like Devil's Attorney, a new simulation from 1337 Game Design that's one part comedy, one part 1980s culture, and maybe two parts lawyering, all carried out via a snazzy touch interface that's much more entertaining than studying case files and figuring out what habeas corpus means. 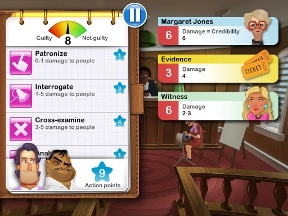 Devil's Attorney is all about Max McMann, attorney and all around man with a plan. He's suave, he's hip, he's got a great suit, and he apparently wears a perfume called Success, which in our minds means he smells like a cross between rubbing alcohol and Brylcreem. Max works out of a small office and takes on cases one by one, going against some of the toughest/craziest lawyers in the city. Winning cases earns Max money, and you can spend that money to upgrade the apartment which unlocks new abilities to use in the courtroom. It's very much like a light RPG in that nature, though it's thoroughly casual in design and form.

Courtroom battles play out like a law-infused game of touch combat, presenting Max and his moves on the left and the opposing council on the right. Each "enemy" is armed with a damage score, health points, and possibly a special ability or two, all spelled out beside their picture. Scrolling through your list of talents, you can unleash attacks that directly damage witnesses, lawyers or evidence, reduce their attack power, render them inert, or recover your own "health". Each ability consumes action points, and when you run out of action points, your turn ends and the other side gets to take their turn. Survive through to the end and you just might live to lawyer another day! 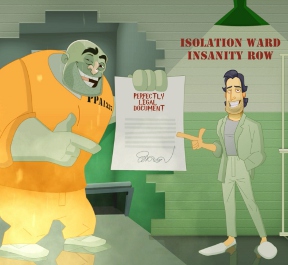 Analysis: Initially described as a game that drew inspiration from Phoenix Wright, Devil's Attorney isn't your typical investigation-based mystery solving experience. Instead, it's almost like a hybrid game of Puzzle Quest with enemies and skills to earn and use in combat, all played out in a strategic sort of way. You even get to trace your way up a skill tree by adding new furniture to Max's apartment, which is probably the snazziest way to gain abilities in casual gaming history!

Gameplay alternates between courtroom battle and the between rounds skill optimization, but most of your time will be spent facing off against opponents. Unfortunately, this can lead to a bit of repetition later in the game, as the basic formula presented early on remains true to the end. In true casual form, though, it's expected you're not here to play through the game in a single sitting, so kick back and take a leisurely approach to winning the world over with your smile.

If you're an 80s guy or gal, you'll certainly get a kick out of Devil's Attorney. Even if you're not, this is a stylish and casual simulation game with a great sense of humor, some lovely voice acting, and a nice sense of progression that will keep you tampering with evidence all afternoon long.

Devil's Attorney is an excellent experience and well worth the price point. For reference, I purchased the game yesterday, and completed it this morning at the "Hard" difficulty.

-The art style is vivid and carefully evocative of the game's epoch. When combined with the music (which also magically hits the sweet spot of the 80s in a variety of ways), the game's aesthetic has the potential to forcibly bring back a decade you thought you had left behind. (The game's aesthetic polish is undeniable, but the point of that polish may be lost on younger players.)
-The talking head animation and voice acting is superb, and I say that with the entire game industry in mind. Even where triple-A voice acting falls short (with separately recorded lines coming one after another), the voice acting in DA strikes the right tempo for immense humor, characterisation, and (surprisingly) subtext. Even with it's use of caricature, the voice acting handily fulfills strict definitions of the word 'acting.'

However, there are a few potential missteps in the game's mechanics:

-As you unlock more techniques, navigating the growing list in trials can become a touch difficult. The list grows longer, but the techniques barely sorted according to effect. Dividing the techniques into subcategories could have helped (eg. Witness, Evidence, Special), but this is a minor problem.
-The 'trials' themselves aren't too difficult, but the inconsistency of techniques that can do anywhere from 1-5 damage (for example) creates a need for restart scumming (ie. restarting the trial until the Random Number Generator gives you a favorable result). Early in the game, restart scumming allows you to go after the coveted fast completion bonuses, but later on, scumming becomes necessary to complete trials at all (at least on Hard difficulty). It's clear that there was an attempt to create a system that balances action points spent and consistency of damage. However, in this game where there is no penalty for restarting a trial and where trials are not long enough to allow regression to the mean, the random number generator ends up determining how many times you need to restart as opposed to whether or not you've chosen a good strategy.
-At the beginning of each turn during a trial, you are given 8 Action Points. Your turn ends when you have spent all of your points. However, some situations arise where you are left with 1 point that you would prefer not to spend, such as a shield that renders any 1 point technique useless, or a regenerative ability that will heal the 0-1 damage of a 1 point technique. The option of passing unspent points to the next turn would not not have been so out of place in a game that rewards faster completions (as opposed to delayed completions).

I don't have much to say beyond this. It's a great game. You should pick it up.

Chao's right; not only about this being a great game at any price (only $3???) but also about the re-rolling for points at the start of a trial. I figured it out quick and thought I was just being a smart, ruthless lawyer but it quickly turned out to be a necessity on some cases if I wanted the bonus. (Maybe that was their plan all along; making me do whatever it takes?)
I highly recommend this game if you:
A) lived through or like the 80's and love pop satire
B) like 'old school' games with character
C) like strategy and RPGs.

Some tactic tips:
-plan your strategy ahead of time for at least the first round and use that re-roll trick wisely!
-a good plan is to minimize the damage for the first round and then clean up the rest afterwards.
-Don't assume you need to take out a prosecutor immediately, a good plan is to get rid of the big hitters in the first round and then with 2 points left over, use objection on the prosecutor to either keep them from attacking or aiding the others.
-Many times a coach or expert will be gotten rid of first, but weigh the options! It saves points, which is the name of the game.
-Reverse psychology is a great option to get, and don't forget to use all the others too!

Also! Objection WILL disable Witness Protection for one turn.

Nice game, but no challenge at all if you know how to play.

Once you have deep voice and reversal psychology (both super abilities) and you have actually the whole game in control.

Use these both skills to ko the high damage output with low hp in 1 turn while objection the one you cant do it temporary.

What the final battle, if you complete vanity and decanance ability list, you evenly grow in hp instead of losing every turn.