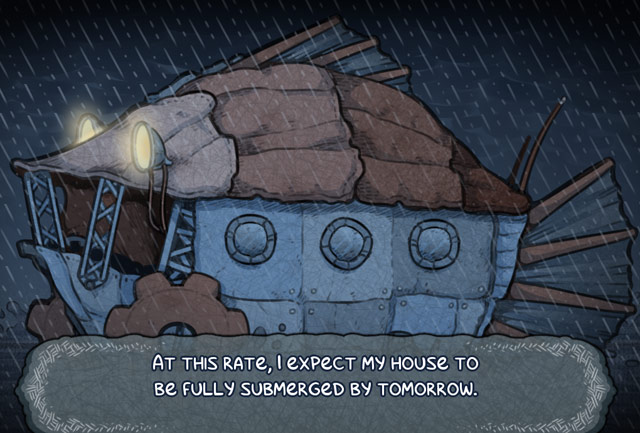 You are a scientist, and the writing is on the wall. The signs are dire and you cannot help but comprehend what is happening. Your island has seen a torrent of rain like you have never seen before, day after day. You've grabbed whatever you can carry and stuffed it into a makeshift boat to seek temporary refuge from your floating prison, to continue to take measurements faithfully until the end. Just as you push off, you're thinking to yourself: surely matters can't get worse?

It turns out that you're in for a crippling shock in the usual cruel lesson of Murhpy's rule: barely can you say "anchors away!" before you're accosted by a knife-holding pirate, Issa. And guess what: she's not there to play nice. She's taking control of your vessel and hijacking it for her own (devious?) purposes!

You play as Mell, data scientist charged with meticulously keeping charge of rainfall data along with logs to the end. Although it may sound like a bland, pedestrian kind of job, an extra element of suspense is omnipresent when you are under constant threat of your captor potentially invading your private logs.

It's also not as if Issa is going to toss you in the brig and throw away the key. Oh, if only it were that easy! No, she's going to have all sorts of demands of you, from being drinking buddies, to visiting her own personal island and treasure trove of, shall we call it, stuff, to demanding that you prepare her meals like a swordfish. It's almost a full-time job to keep up with her and her demands. But then again, she is the one with the knife, and she has established herself as the captain, so obey her you must.

As your adventure progresses, you'll have to make some difficult choices. If given the choice, will you metaphorically stab Issa in the back with her own knife? Will you risk life and limb to get back to your island and search to see if there is a deeper, darker truth behind it all? How can you even hope to find happiness when the only home you have ever known may be fading into oblivion and becoming uninhabitable? 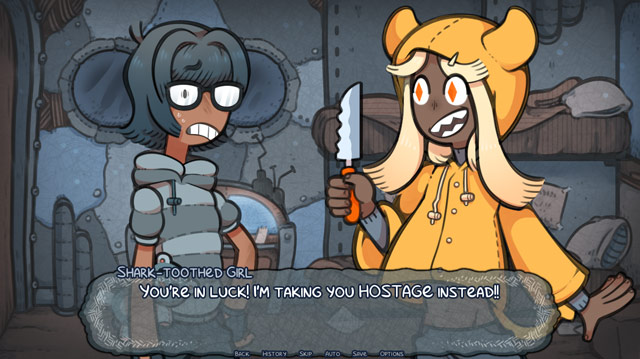 Although the relationship between Mell and Issa doesn't exactly get off to a fantastic start - being held hostage makes a terrible first impression - it soon becomes clear that Issa is far from a flat character. She is also a dweller of the island, but from a different region than her crew-to-be Mell, and has a bit of a vendetta towards Mell's folk for what she feels has been unfair treatment. Mell claims to know nothing of the sort and to be completely unaware of the situation, but does Issa have a point? And just as Mell is afraid of Issa potentially harming her, can Issa find it in her heart to trust and forgive her, in some sense? It's a difficult journey and it seems likely that their combined brainpower will be necessitated to get through it successfully.

Disaster Log C is built in Renpy and played with a similar control scheme to many visual novels. Clicking the buttons "Skip," "Back," etc. will navigate through the text, or you can use other controls on the keyboard. Occasionally you will be presented with a choice of two or more options, and your decision may influence the rest of the story. There are a total of five endings to discover, some happier than others, but I'll leave that all to you. Good luck finding your future!

3,012 Views
0 Comments
chrpa— Jayisgames needs your help to continue providing quality content. Click for details Welcome to Weekday Puzzle! Noa Dev's retro platformer has high playability and feeling of satisfaction after each cleared level, especially later in the game when the difficulty...  ...

5,051 Views
10 Comments
chrpa— Jayisgames needs your help to continue providing quality content. Click for details The week is over, the new Weekday Escape is here! The first and the second games are by Selfdefiant and you can compare his 'old' style game...  ...