In the game of love, its a dog eat dog world out there. Literally, in the case of HollyRose's visual novel and RPG. In Dog Eat Dog, help Daryl find his missing pup, Tyke, while trying to fight off the canine infection called D.E.D. Hordes of dogs roam the street, attacking dog and human alike, and Daryl must find Tyke before its too late. On top of all this, a strange but slightly familiar (and very cute) woman has shown up at his door, professing to know him. Mystery abounds but so does love, because hey, there's no time like the present, even if that present is a near dog-zombie apocalypse. Make choices for Daryl that not only help him get with one of the two ladies that show up, but also unravel the mystery and attempt to save humanity. 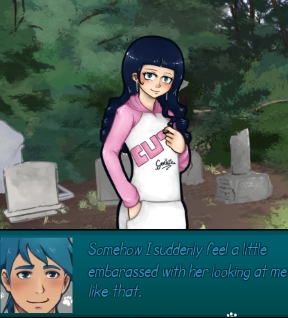 Dog Eat Dog is a unique story with five different endings, and while replaying through can get a little old as not all the conversations change, it is definitely needed to fully understand the whole story. Not only does picking a woman change Daryl's love life, but it also gives a different perspective on things going down. Finishing it only once will leave some major plot holes as the other lines fill in these gaps and paint a vibrant picture. While there is a fighting system in place, it only really serves to break up from the conversations and further the story. No strategy is really needed and it would probably take a bit of doing to actually lose. As the game is more story involved it doesn't take away from the over all game play but boosts the tale. HollyRose does a very good job at making a semi-lighthearted games with some pretty dark themes. The Mystery is also well done enough that it's not one you can predict and as you replay you gain some exciting "Oh! That's explains it!" moments. As HollyRose's first game, Dog Eat Dog is not perfect, but it is a very well blended mix of mystery, action, dating simulator, and interactive fiction. Well, we just got to say that you set a high bar for your next game, HollyRose.

Oof, dead dogs is a little much for me. You lied to me, cute picture of a dog on the front!

This was a fun little game. I'd like to see a walkthrough at some point. I did find three endings so far but somehow I think there are a couple more.

Okay I posted too soon! Not going into tons of details but here's what I found.

There are at least six endings.

If you choose to take Lily to the lab and use her to make an antidote, you will trigger this ending.

When you leave the cemetery you are given a choice to either fight and collect samples or run away to avoid fighting. Next you will be given another choice - if you choose to take a sample from Lily then you will trigger the Game Over 1 ending. The other two options will now lead to Game Over 2 wherein you don't have enough samples to make an antidote. If you went to the church by yourself, I believe it was still possible to get a good ending since you get an additional sample from the church.

You get this ending by losing during a battle. The battles are so ridiculously easy this is actually a bit difficult to do. I did it at the second battle by doing nothing but Guard. Took a lot of rounds, though.

Choose to fight more dogs to get more samples, and then do not choose to take a sample from Lily. You will get a working antidote. Also don't choose to favor one girl over the other, or you could get one of the next two endings instead.

Whenever you get a choice to do something sweet for Maria or take her side, choose that. This includes sending Sara to the church so you can be alone with Maria. Then make your last two choices as you would to get the Good End as written above.

Whenever you get a choice to be nice to Sara or take her side, choose that option. This includes sending Maria to the church so you can be alone with Sara. Then make your last two choices as you would to get the Good End as written above.

I feel like there should be a True Ending because

If you select to search your apartment for clues early on, you find a leather tassel. Later if you search the church yourself you find a leather jacket which matches the tassel and you remember it belongs to Sam, who we learn from Game Over 1 is "the bad guy." However the only other effects that finding these clues has is extra dialogue during Game Over 1. Perhaps there is another ending where that loose end is tied up? If it exists I couldn't find it.

If anyone has corrections or additions by all means post them!