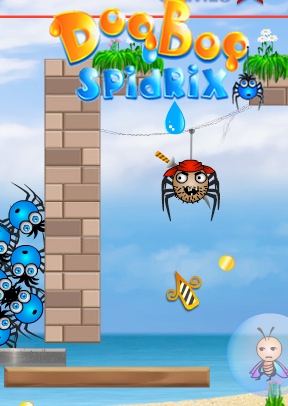 So we can all agree that butterflies are erratic, chitinous demon-pixies whose foul wormlike spawn devastates crops and brings ruination unto mankind, while spiders are effective agents of pest control and generally misunderstood benefactors of humanity? Right? Well, steel yourself for a twist, because DooBoo Spidrix, a physics-puzzler from Vivern Games Studio, asks you to rescue innocent butterflies, imprisoned by cruel, if cartoonish, arachnoid captors. It took me a while to wrap my head around such an inversion, but it turns out to be effective dressing for a very nice puzzle game.

As it happens, the whole "rescuing butterflies" theme is just fluff to justify beating up spiders. The actual goal of DooBoo Spidrix is to knock the spiders off the screen, using droplets of water to gently nudge spiders and other game elements to achieve this goal. There's something very Ferngully-ish about using dew-drops to effect the liberation of cute butterflies, though in later levels you also get fire and ice drops to respectively burn and explosively project certain obstacles. Which I guess is also sort of like Ferngully... Anyway, you only get a certain number of drops each level, and you have to use them in a certain order, so the challenge is in deploying your resources effectly and accurately to eliminate your spidery foes.

The game is a lot like other phuzzlers where you have to push certain objects off the screen in a set time, though the means of doing so is novel enough to be interesting. Puzzles range in difficulty from simple and basic, to not that difficult, but clever. DooBoo Spidrix is not supposed to be fiendish or taxing, and you could probably complete it in an hour or so. Whether you enjoy it will largely depend on how much you like cute music, colorful levels, and cartoony character design. I for one liked the bold look of the various arachnoid antagonists, even though they reminded me a bit of those "Free Smileys" banner ads that were ubiquitous a few years ago.

I was occasionally frustrated by a few puzzles, not because the solution was unclear, but because the game can be very finicky about where your droplets need to land. It also occasionally has the problem that other phuzzlers have, in that the physics don't always produce the results that they should. But in general, DooBoo Spidrix is a nice, light puzzle game with pretty good physics and cute design. It may also offer a window of sympathy and let you think kindly for a moment of the mistreated butterflies, before you come to your senses and recall them as the spastic madmen of the insect kingdom that they are.

Yes,I played it! it's really funny game! I liked it!

We need a walkthrough for this game.

A free game coupon to whomever sends one in to us (including screenshots).

I like how the game isnt so hard that you rip all of your hair out but it still puts upp a challenge! great game.