One of the early hits on the iTunes App Store and a strong leader in Android game sales, the Doodle Jump games quickly turned into the definition of a successful mobile game. As of the end of 2011, over 15 million copies of the arcade game have been sold across various marketplaces, and it has remained one of the best-selling iOS games since its launch. With such a simple premise and creative visuals, it's no wonder Doodle Jump has gained such enormous popularity. Now, with mobile markets still growing, Doodle Jump's various incarnations have spread to include NOOK and Kindle Fire! 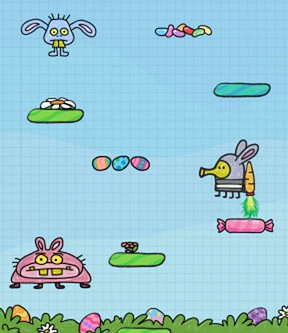 Playing Doodle Jump is as simple as holding your device and tilting it. The little green Doodler jumps on his own, hopping at a constant rate no matter what's going on. By tilting the device, you can influence where he goes, the ultimate goal being landing on platforms to climb higher and higher. Depending on your flavor of Doodle Jump, different enemies, obstacles, and items can be found along your journey, from rocket ships to snowballs to spider webs and ghosts. If you fall, you start your ascent over again, but it's all in the name of fun and high scores, and you won't be able to stop jumping until your batteries run dry.

There are several variations of the core Doodle Jump game, not all of which are available for every mobile device. The core gameplay is the same, no matter which version you own, but the visuals will have a distinct flair and a lot of the enemies and items will be different. No matter the flavor, though, you can't go wrong with Doodle Jump!

NOTE: This game was played and reviewed on an iPod Touch. Game was available in the North American market at the time of publication, but may not be available in other territories. Please see individual app market pages for purchasing info.