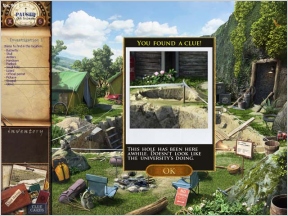 England's leading skeptic, Dr. Ignatius Lynch, is looking to challenge his mind with a new story to pick apart. He finds a newspaper article telling the tale of a haunted archaeological site where a mysterious ghostly woman appears. Lynch immediately sets out, ready to turn his skeptical eye on the situation.

The game is divided into a series of investigations where you'll search the scene for items and a few key clues. Afterwards a witness will hand you a Clue Card which will be used in conjunction with the items you found to uncover new facts about the case. After a short mini-game you'll jump right in to the next investigation.

Analysis: When evaluating hidden object games one question always floats to the top of my mind: are the items hidden intelligently or did the developers go out of their way to give me a hard time? Dr. Lynch strikes a fair balance between logical item locations and camouflaged objects, so I didn't have a very tough time finding what I needed. A few of the descriptions were a bit too obtuse for my taste, however.

Dr. Lynch: Grave Secrets is a gorgeous game that shows polish in every area of presentation. Despite the good looks, however, the underlying structure is a bit formulaic, almost as if it were afraid to step out of the set path hidden object games before it have carved out. If it followed the design of, say, Azada, Dr. Lynch would be an unstoppable juggernaut of a game.

Great set-up, nice storyline, Dr. Lynch: Grave Secrets only falters a bit in the gameplay department where it loses the crucial ability to bring in cross-genre fans. Still, hidden object buffs will find plenty to love in this release, and the game has enough dark mystery for everyone to enjoy.

I played the demo. Pretty good.

I completed the game a couple of days ago.
You forgot to mention it's got an amazing storyline, it's one of those games I had to finish in one sitting because I wanted to know who the culprit was (though I could have guessed it).
Plus, the graphics are nice and the items are mostly where you'd expect them to be, not giant things hidden in the sky or along the walls.

But: The characters remind me a lot of Sherlock Holmes, the investigation at Hercule Poirot. It feels like Floodlight put a few successfull concepts (in parts even created by them originally) in a bowl, mixed it and here we go.

That does not have to be negative. The game is great in the graphics, nice in the gameplay and good in the story. But there is nothing we didn't see before, nothing new.

Floodlight Games showed before how innovative and creative they can be. Let's hope that the next game will show that again.

What is the secret or solution for lining up the six acorns? help

I like this game but I am totaly stuck because I cannot find the Humingbirds and the hints don't work. I have search the screen with my trifocals and my husband's bifocals but still can't find even 1 hummingbird.

Is there a way to bypass these optional items or does anyone know which part of the screen they are located?

Any help would be deeply appreciated.

if you fill up the bird feeders, they will come. How do you open up the candle alter?

To open the candle alter,

you have to put the candles in a cross patter, down the center and across the second row from the top.

I'm stuck on the last piece of the light pink artifact piece. =

Oh, and for the acorns, you just kinda guesstimate the order.

It's on the bench and just line up your pointer [not the acorn] where you think it should go. There will be an outline and faint picture, like with the busts.

Can anyone tell me where the "L" is in the tea room?

I'm having trouble with the tea room letters also, where is the L, or is it an I?

To get the hummingbirds,

Hope this helps you.

Does anybody know where the "L" or the "I" is in the Tea Room...I'm stuck and it's getting really frustrating....HELP!!

The L is in the top left corner of left curtain

Where is the anchor and the X for the post office bin?

Have a look here for the X
Dr. Lynch ->post office letters

I have no clue, where the anchor is, as the objects are random

the last piece of the light pink artifact piece is above the wooden trunk right of the blue bag. It was difficult to find. Diana

Where is the line to hang the clothes?

Does anyone know how to fix the fountain?

Where are the letters for the board in the town square? I have found all but the "L" and the other "O"
Thanks

Does anyone know how to line up the candles?

Can anyone tell me where the missing letters T and S for town board's "Cotswald" word are? I found all the others. Please help!

I am being blind! Where is the teddybear or white pebbles please on level 4?
Thanks

I found the S and the T among the posters on the board, but can't seem to find the L. Help, please.
The white stones are in the planter to the right on the screen, a copper tub. The teddy bear is in one of the wheelbarrows, or crates, not really sure, I have a hard time finding it myself when I replay that level.
Thanks

Any help would be appreciated. I am having trouble finding the G in the tearoom. Thanks in advance for any help.

The G in the tearoom is located on top of one of the chocolates in the box of candy. Found it myself after much searching. Good luck all!

investigation 14 ,the invisible message,where is it, what is it??? i stack , please help!!!!

can not find the last two letters in the tea room...e for earl grey and the last one I can't even guess...jharling?

Can anyone help me with the 6 acorns. Where do you line them up or is it just a matter of clicking on them in a certain order? Please help. It will be greatly appreciated.

can not find the last letter in the tea room...e for earl grey, please help!

Please help! I cannot find the e for Earl Grey in the tea room. I'm stuck until I get it. Please rsvp!

acorns. place them on the bench by order of size

how to make coffee in jail?

e is on the box where the cat is looking up... it is colored red

Thanks for the info on the e, nyx!

How do you make the letters stick to the bins at the post office?

Never mind about the letters in the post office. For those who don't know, place the letter just to the right of the drawer knob.

#14 where is the message please help

In investigation 13 (Lydia) in Carstair Manor, Portrait Hall, you are supposed to find 20 pieces of paper. I don't find any at all. Where are they?

HELP! Cannot find the "O" in the tea room! Thank you!

For the fountain, I have the valve on it and its flowing a bit but it says that some dirt is still clogged in it. How do I fix it?

Attach the knob to the bottom of the fountain. Hold the knob with your mouse and spin it around until the water flows freely through the fountain.

How do you fill the humming bird feeders?

Which investigation is that, please?

@Alan
Please have a look at the screenshot :)
Screenshot for valve

I can't find the L for Lapsang Souchang in the t room. Can you please help me this is the second time I have played the game and got stuck here

Ok found the L on the top left of the left curtain pelmet, the D is on the table cloth on the left
Hilary

guys i cannot find the sticky note in the vicar's office?

Cannot find invisible message in investigation #14. Have been trying for hours. HELP!!!

investigation 5, where are the 2 airplanes

guys i cannot find the sticky note in the vicar's office?

it's on left wall

place coffee pot beneath water on right, it will fill up and then pour the water into the coffee pot, hit green button to turn it on

In investigation 13 (Lydia) in Carstair Manor, Portrait Hall, you are supposed to find 20 pieces of paper. I don't find any at all. Where are they?

click on the picture of the girl in green, pieces of paper are behind it, they fall and then you pick them up

Could someone help with this answer please as I am stuck on it too. Thanks.

***Cannot find invisible message in investigation #14. Have been trying for hours. HELP!!!

the hidden message in level 14 :
on the bed lies a little book
you need the coal to go over the blank page then there is your message

Ummm.. hwhere is the 2nd letters R and O in the word Brumbery something.. :(

Can some one tell me how to make the coffee in the jail. l have the jug, the water, the filters, the coffee, but l can not get it to work. HELP PLEASE

Could someone help me with the fountain scene? I'm turning the valve but nothing is happening! Help I'm stuck! Thanks.

On Level 9 in Carstairs mansion, what is a handle and where is it?

The 'Sleepy town of Hereford'??? Having been there on a Saturday night, I would'nt call it 'sleepy'.. drowsy and slurry maybe!

Where is the handle in the Carstair Manor-Parlor? It's the only item I have left, and I have about 1 minute and 24 seconds, and no hints. Help, please

how long do you have to twist valve on fountain before it works? Been doing it for five minutes now and my time is almost up.... investigation # 14 please...

Please help. I'm on investigation 13, fountain, and unable to finish. I've found all items and knob but am obviously still missing something on fountain repair. It does not show fountain repaired and I can turn knob all day and accomplish nothing. HELP!

Where is the propeller in Game 10 missing lady?