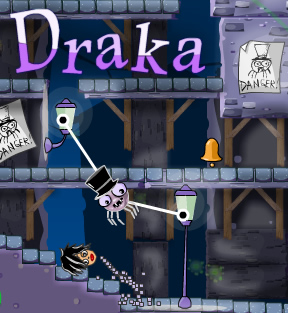 Spiders. Why did it have to be a top-hatted, web-slinging, physics puzzling spider? Because it's Halloween, sillies, and a fun way to honor the holiday is by playing this whimsically macabre game where said arachnid swings from point to point in quest of turning victims into... well, "headcrab" is already taken, so I'm out of ideas as to what to call them. But beware! Draka may only have twenty levels, but they get ghoulishly tricky fairly quickly. Even the most casual fan will want to try this one out for the art, but only the most dedicated will persevere through them all.

The game is learn-as-you-play tutorial style, but the basic idea is that you have four lengths of web to toss at any one time, and you can hook on to any anchor point within range, and detach from others to swing yourself around. In addition to stationary lamps, the game includes things ranging from helpful balloons to frying-you-like-a-bug-zapper electrical wire. The game's difficulty is perhaps higher than it should be because of the decision to have your life (you get three hearts) taken away one per hit by any harmful area, and if you're floating over a torch, you can go from three hearts to zero before you can even get your mouse over there. A short invincibility period after being hit, similar to the approach most platform games take, would have been a better option.

Generally there is an approach that will enable you to get by without losing any hearts at all, so if you keep dying, the best thing to do is rethink your path to the victim. Definitely a game to tingle the spines of the physics puzzle pro, but even the less adept should give a few levels a try for some spooky fun.

Stuck on level 12. Am unable to reach upper floors without burning up on torch or getting shot by police.


This should put you just below bell, but above the platform.