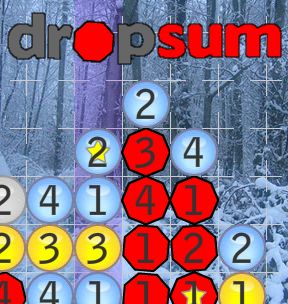 DropSum is an elegant puzzle game released early last year by Nick Harper, the creator of Flipped Out (you may recognize some of the sound effects). Harper describes it as a cross between Tetris and Sudoku, and there are some obvious similarities to Chain Factor, but I would say that DropSum has since grown into a fully-developed, unique game that stands comfortably on its own. I have rarely encountered such a simple premise that offers so many layers of depth.

The basic idea is that you drop numbered orbs into a grid from above. Any time a straight group of balls adds up to 9, either horizontally or vertically, you score some points and all the orbs involved change color. They start out colorless, and advance to blue, then yellow, then a furiously spinning red octagon, before they finally burst and allow other balls to fall into their place. The numbers that fell then have the potential to form scoring combinations with their new neighbors, which may burst other orbs, and so on. Setting up large combos like this is the way to score serious points. If the play field fills completely, you lose. 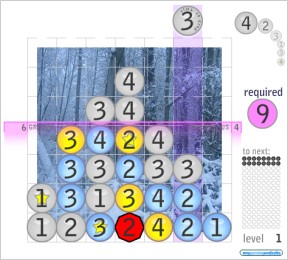 The "Basic" game gives you all the time you need to plan out complicated numeric chain reactions, but there are two other modes of play for the more action-oriented mathematician. "Timed" mode awards you extra points for playing quickly, while "Arcade" introduces power-ups and the melodramatically titled "Death Timer".

Although the basic game never forces your hand, playing slowly will still damage your score. Some of the bubbles release bonus stars when you burst them. Collecting several stars will grant you a substantial scoring boost, but they disappear after a set period of time if you don't earn any more. If you're shooting for points, a big part of the game is about targeting the star bubbles to keep that bonus multiplier going.

Analysis: DropSum has a hint of the feeling of a timeless masterpiece like Bejeweled, or indeed Tetris. It's not just the mechanic of dropping objects into a pit, but the fact that the gameplay caters to all skill levels. If you can add to 9, you can play it. You can set off some pretty impressive combos by messing around, getting lucky, and occasionally leaping on an obvious row of threes; but to really compete, you must develop an advanced eye for multi-part chain reactions and learn to execute them quickly.

If you'd like a sharp kick to the ego after you've finished a game or two, take a look at the leaderboards. DropSum has been around for a few months, and some of the high scores are truly inspiring.

The other thing contributing to that classic feeling is the fact that the game doesn't need any embellishments in order to be fun. The power-ups in the Arcade Game are a neat diversion, and I love how you have to earn the better weapons by creating larger combos, but it's all icing on an already scrumptious cake. The real attraction here is the pure awesomeness of numbers; all the different ways you can assemble a nine from lesser parts; the near-infinite possibilities for crumbling a tower of integers into itself. It's like an arithmetic playground.

Of course, that is the very reason why DropSum will never have the universal appeal of Tetris: the adding. A lot of brains, when they sit down in front of a game, don't want to do it. Pictures only, please. Serve my math as an optional side dish. And that's fine and dandy and probably normal… but if you ever find yourself yearning to lay down some damage with the power of sums, this is as good as it gets.

Plus, DropSum may be clairvoyant. Once after a game it told me "Your reactions are those of a deer in the headlights. You are as cunning as a banana." Which is exactly true.

Thanks for sending this one in, Tad and Kelly!

Apparently, my cunning is that of a high-school boy sneaking a peek in the girl's shower (just over 55), but my reaction time is like the turning of the tides (just under 10). Sounds accurate.

[Edit: Game ideas cannot be copyrighted or "licensed". So, although similar, these two games don't necessarily have to have the same people behind them. -Jay]

Fun game - I like the weird descriptions of your speed/brain size at the end.
Happy New Year, everyone!

Pretty cool game. I started doing really well on Timed Mode and it eventually started giving me 7-blocks to place, and now my numbers had to add up to 11! Needless to say, that really fried my brain, since my entire strategy was based on which numbers added to 9! Then again, it was about 2 AM, so my brain would probably have been fried by anything requiring thought... :)

Anyway, great game! =) Didn't play for more than one hour though!

Hehe, actually 17 hours is how long ago was the record set ^_^

(now nobody's gonna belive I have a physics degree!)

Being insulted at the end is the best part of this game :)

"You have the forward planning of an air traffic controller, but the mental agility of the coffee cup that keeps him awake all night."

I cannot stop playing this.

I like it. Keep playing it almost every day. Usually one-two, max three approaches