There was once a crab who sang about the charms of life under the sea. Now that you've been turned into a fish, you tend to politely disagree, and by 'politely' you mean you'd like to smack him upside the head. Being a goldfish sucks! On top of which, your memory is almost non-existent, so you have no clue as to who did this to you or what your name is. You will henceforth be known as Dudefish as you embark on Episode 1 of Perfectly Paranormal's aquatic point-and-click adventure. 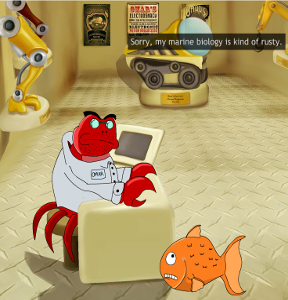 Exploring his new underwater home, Dudefish discovers that he (and some other unsuspecting humans) fell victim to crazy scientist Lloyd's Gunzor, a contraption made especially for turning folks into fish. Now it's up to him to find a way to reach the land once more and face Lloyd in hope of getting his legs back – but, this being an adventure game, he'll have some exploring to do first. When you hover over an item and the cursor turns red, that means you can interact with it or put it in your inventory. You can drag some items into two empty slots in the inventory to combine them, and use them by dragging them to the appropriate object/sea creature or yourself. Click on characters to talk to them, and you can press the [spacebar] to skip dialogues.

If you're into old-timey point-and-clicks, you're almost sure to find Dudefish very lovable. It has that almost nostalgic feel, from the goofy plot, to silly item uses to rambling but hilarious dialogues. Even though this is only the first episode, ending in a cliffhanger, you can see how much effort and enthusiasm went into creating Dudefish. It's hard not to fall for a game featuring a couple of advice-giving eels who work as neon lights in the toilet of a quasi-noir bar called The Sea Cucumbar. The hand-drawn backgrounds help set the appropriate marine mood, and the voice acting is inspired and quite funny, even if the recording quality isn't exactly top-notch. You might not always agree with the game's logic, which could result in getting stuck here and there, but the overall impression is of a charming, cheerful little game which will have you shouting CARROOOOOTS! like one of its more eccentric characters.

If the game is loading too slowly for you, try downloading it!

this game doesn't save like it's upposed to. I accidently clicked an ad and it left the game. when I reloaded the game then pressed continue it wouldn't take me back to the recent save spot.

I downloaded the Mac version, but when I tried to run it it said it was damaged and couldn't be opened.

I to grabbed the Mac version and got the error stating it was damaged. No luck after unzipping it twice, so I snooped into the Flash app and got it to work.

You should now have the file 'movie.swf' in the same folder as 'assets' folder.

what about on my issue?

This is just...too much. The puns are horrible, and not even close to being funny, the voice overs are terrible and the Norwegian accent makes my ears bleed, not to mention the horrible mispronunciation of some English words. This game is so amateurish that they didn't even bother making the voice overs all of the same quality or volume, and the subtitles are often very different from the voice overs.

The only good thing to say about this game is that the graphics look great. But please, don't make another sequel, the world hasn't been so cruel as to deserve that.

The dialogue goes way too slow. I like that you can skip it, but rather than skipping everything that character would have said, it should skip to the next set of subtitles.

I liked the puzzles, but I agreed that the dialogue was atrocious. Also it took forever to load on my poor old PC, even the downloaded version was laggy (but definitely worth it considering how long the web version took).

One amusing thing was at the first screen:

If you talk to the skull a few times, you reveal that it is Leonardo DiCaprio from Titanic. At least theoretically!

But that was the extent of the humor of the game. The puzzles and gameplay only barely made it worthwhile.

Well I loved it, and I guess that's showing my age :D I miss the old school adventure games, and this one fits perfectly :)

It seems mostly these are only available for downloads, or it is few and far between when we get them for browser play.

The only suggestion I would give, is to agree with the rest that the dialog and movement is too slow.

Maybe we can make a speed up potion at bartender?

Make the space only go to next dialog option, so we don't miss anything important if we get impatient and skip ahead, as others have said and I agree this would be great thing.

Please DO make the next chapter! I want to play it !!!!

I did enjoy the silly humor :D

Honestly, I thought the dialogue was the saving grace here. It seems to be a matter of taste.. the ui is pretty unpolished (the green light/red light thing was fine, but movement was really awkward and some of the art was much more rushed than the rest) but it was cute and goofy.

I actually really liked this (once I realised that you can't move while the inventory is out. doh >.