By now you're no doubt well-acquainted with the dungeon crawler format. Hero goes in, steamrolls through various monsters, and pops out the other end with a princess and/or box of treasure in hand. Well Jinmann Kim and Jaewon Yoo's Dungeon Warfare, currently playable in Alpha and still in development, flips that formula on its head, casting you as the world's most insidious interior decorator tasked with designing all manner of traps to keep the hordes of greedy heroes at bay. This defense game has you using the mouse to place various spike traps, dart shooters, blockades, snares and other fiendish obstacles in the path of the heroes as they march towards their goal. Copious amounts of retro-style slaughter ensue as the crowds of treasure-seekers march blindly into each trap. These little guys aren't big on self-preservation, it seems. 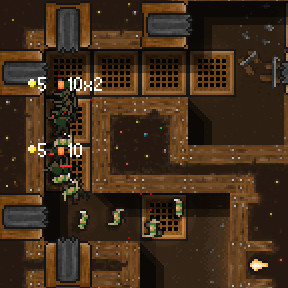 At first, Dungeon Warfare feels like a well-made one-trick pony. Rather than alter pathways or change tactics, heroes simply come at you in greater and greater numbers, easily allowing you to mow them down simply by adding more and more traps. This changes as you get further into the game, however, when new enemies appear, such as priests who can heal themselves unless you keep up a constant stream of damage, or knights whose shields must be destroyed before they can be harmed. You also get consumable traps, such as snares, that can be deployed for free but have a cooldown, requiring you to place them strategically for optimal effect. Enemies also start altering their paths based on blockades you throw down, meaning you can shepherd them into dangerous areas, though they don't always go quite where you'd expect. Dungeon Warfare also features an upgrade system, making each trap deadlier as the game progresses. It's an awful lot of fun to be the bad guy, so check out Dungeon Warfare and prepare to get mean.