Echoes of the Past:
The Citadels of Time 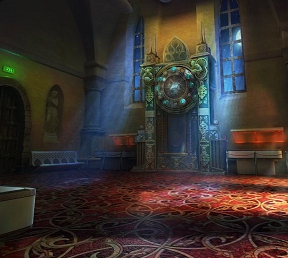 In this, the third time around, the witch is getting really ticked off with your interfering with her plans, and once again she has cast a curse upon the museum, this time freezing various parts of it in time and trapping the inhabitants of the past (the museum was once a castle) as ghostly apparitions. It is up to you to explore this spooky museum, travel back in time, and find all the pieces of the cursed clock to set things right and hopefully defeat the witch yet again. Maybe she'll stay defeated this time around? Please?

Wandering through the museum (and the other parts of the castle trapped in time) is accomplished with the usual click of a button. A handy changing cursor indicates areas to examine, places to go, people to see, and items to acquire. The controls are pretty standard for the usual adventure/hidden object hybrid with one notable exception: the top loading inventory. As most hybrids have the inventory on the bottom of the screen, this can take a bit of getting used to. Acquire items either through picking them up as many useful things are just laying around, by solving hidden object scenes to get that one perfect item, or by solving a large array of mini-games and puzzles. A handy refilling hint feature and the obligatory notebook to keep track of clues round out the adventure experience.

Analysis: Although Echoes of the Past: The Citadels of Time is the same story of the witch and the museum and the castle, it is definitely worth a look-see. The visuals are lovely with amazing little details and animations that really bring them to life. What's even better is how interactive the backgrounds are, with puzzles, games, and other details packed in everywhere you look. Yes, the story has been done before (and not just in the Echoes of the Past series), but it's always gratifying to see it done right. 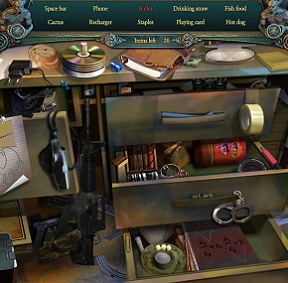 A lot of adventuring and hidden object finding is packed within the confines of the five chapters (and bonus adventure if you get the collector's edition) and that, more than anything, is what makes Echoes of the Past: The Citadels of Time a real treat and elevates it past many of the hybrids on the market. The hidden objects scenes are the first of what makes the game so fabulous as they are not completely static and require some interaction to find all of the items on your shopping list. Amusingly enough, you will never see the one item that eventually goes into your inventory until you find everything else you've been ordered to find which cuts down on the "okay, I've found the shovel, so why do I have to find all this other crap?" type of hidden object scene. Best of all are the "reverse" hidden object scenes (a la Enlightenus) in which items you previously found in other hidden object scenes then need to be placed back into another scene, mixing up the gameplay.

The mini-games and puzzles are pretty familiar but done really well, although almost every puzzle is missing pieces that must be found along the way. Considering the sheer volume of games and puzzles, this can be a bit annoying and feel more like padding as the game goes on. A nice feature of the collector's edition is not only the extra adventure but the ability to go back and play some of the mini-games and puzzles over just for the fun of it without the tedious finding of parts to activate them.

While not the perfect adventure hybrid, Echoes of the Past: The Citadels of Time is nevertheless one of the better ones out there, with lots of adventure and gameplay to be had. With two modes (easy and advanced) controlling the amount of hand-holding the game can be fun for amateur and seasoned explorer alike and a great way to spend some time exploring both the modern world and the distant past. With its gorgeous visuals, spooky music, and packed gameplay this is an adventure/hidden object game done right! Perhaps it's best if that annoying witch doesn't stay defeated...

A Collector's Edition is also available. It includes wallpapers, an extra adventure, the ability to play some of the mini-games and puzzles, and a built-in strategy guide. Remember that Big Fish Game Club Members pay only $13.99 for Collector's Editions (or 2 club credits), and collector's editions count 3 card punches of 6 total needed for a free game.

Echoes of the Past: <br />The Citadels of Time Walkthrough now available!

Echoes of the Past: The Citadels of Time Walkthrough Part 1 (General Information and Chapters 1-2)

Echoes of the Past: The Citadels of Time Walkthrough Part 2 (Chapters 3-5)

Echoes of the Past: The Citadels of Time Walkthrough Part 1 (General Information and Chapters 1-2)

Echoes of the Past: The Citadels of Time Walkthrough Part 2 (Chapters 3-5)