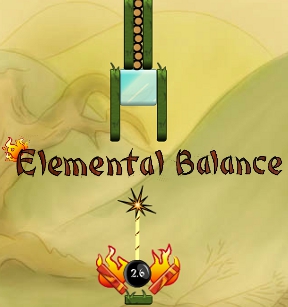 Earth! Air! Fire! Water! irRegular Games! By your powers combined, I am... a physics puzzle!... okay, so maybe it's not as dramatic as the cartoon show, but this way you aren't subjected to the spandex booty shorts or the green mullet. Elemental Balance puts a new spin on a tried-and-tested concept by throwing different elements into traditional physics-based puzzling. Your goal is to clear a particular item on each level by setting and detonating bombs that will blast it around into what will destroy it. Through each of the themed sets of levels, new elements are introduced that have an impact on the way the pieces work.

Just click onscreen to place a bomb if you have one available, then hit [spacebar] or click the button to prime them for detonation. Then, it's a matter of just clicking on the bombs to set them off, and if you have more than one placed, you can detonate them in whatever order you choose. Elemental Balance has a whopping 48 levels, some of which are more interesting or clever than others, but the unique spin it presents on the physics puzzle genre makes it worth checking out. Frankly, I'm just disappointed the Earth stages don't let you play with Brawndo to manipulate the plants... it's what they crave, after all. Later stages get extremely complex, tossing fuses and multiple elements into the mix, and since the game allows you to easily fine tune bomb placement or reset at a snap, it never really becomes that frustrating. Elemental Balance is still, at its core, a very familiar game that could have implemented its ideas in even more effective or creative ways, but if you feel like pretending to be an extremely ineffectual Captain Planet for the day, it's a solid little experiment in elemental mayhem.

Tsk tsk, I really thought you would go for the Avatar reference.

Who developed this game. Was it irregulargames or is that just a genre tag? I don't see the creator anywhere in the review. D:

Yes, it's by irRegular games, the fifth and sixth words in the review.

The game is all right. I was able to finish it pretty easily.