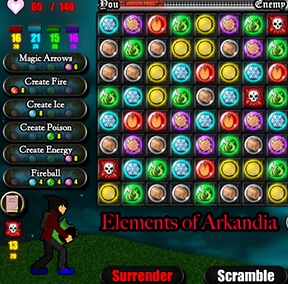 Terry Brown's development studio, Undefined, may lack definition, but it certainly hasn't been short on different methods for RPG battle systems. Enemies have been mowed down by towers in their Protector series, dungeons have been crawled in Arkandian Legends, and beasties summoned with cards in Cardian. But not until now has the glorious offensive potential of match-3 been mined by them. In Elements of Arkandia, you'll use just that to duel enemies and earn loot. Loot which you'll need to pay down the debt that your dad saddled you with while he goes gallivanting off. Wizard dads do that. Gallivant, I mean.

The game gives you a fairly good tutorial when you start out. In the main area of the game, you'll manage your spellbook and armory, where logically enough you can equip spells and armor. You start out with some basics of each and can find more by adventuring. The shopping section sells upgrades to things like your mana bank and shop space for your own shop. In your shop, you'll sell pieces of armor and reagents that you pick up adventuring and don't need. All of that coin will come in handy because you start the game thirty thousand coins in debt from dear old dad. You'll also be able to make loan payments from this main screen.

But forget all that for a moment. The real reason you're here is to go adventuring! If you've played any match-3 title, and given that you're currently on the internet it's a safe bet you have, you should know the basic drill. Swap adjacent tiles to match three or more, clearing them. In this game, clearing gems can fill your mana pool, your physical attack pool (called rage), or give you coins or loot, depending on the kind of gem. Matching four or five gems in a row grants you some extra life and an extra turn also, so naturally you'll want to do that whenever you can.

You'll use this mana and rage to cast spells and physically attack an enemy. The enemies also will be attacking you every two turns, so it's best to make quick work of them when you can. Each area has several enemies in a row which you must defeat altogether before you can claim your loot and money. The total number of treasure gems affects which item of loot you get, so be sure to check the loot tables by hovering over the chest icon in the adventure selection screen. When you finish an area, you'll return to the main screen where you can examine your loot and decide whether to equip it or sell it. 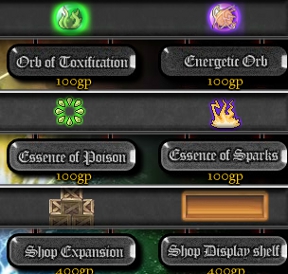 Analysis: If you approach this game like a puzzle, or if you have a perfectionistic streak and want to try to get a four or higher every time, let me warn you that this game will really, really drag. Since there's no way to save mid-adventure, you could easily find yourself stuck to the computer for a half hour or more if you play that way. It might have been best if the developers had included a timer mechanism to encourage a good pace of play, but pretend that there is one and don't get obsessed with finding the best move every time, or you'll get sick of the game fairly quickly. If you play the game the way it must be meant to be played, with a certain relaxation and a good pace, there's still a ton of game here. There are 24 adventure areas and you can play the different areas multiple times in pursuit of their different special items.

The game dabbles a bit in Recettear-style shop ownership, but it feels more like an afterthought than a serious part of the game. You simply click a button, watch a clock go round, and then get told which of the items you put up for sale got sold and for how much. The game does much better with the match-3/battle hybrid. While it isn't the first game to do this, it's implemented well, and match-3 fans will enjoy the added challenge of considering not only how best to clear gems, but also how to get gems of the desired type. There's also a sprinkling of gentle humor here and there, such as the Corrupted Lumberjack, who sleeps all night and works all day. (Someone explain the reference in the comments.)

The only question now is what Undefined will tackle next now that they've crossed off match-3. I humbly suggest full contact rock paper scissors.

I think you forgot to mention that this is pretty much a poor man's puzzle quest with only a few differences and the shop afterthought thing.

I haven't even started playing yet, and I already have 2 things to say

1) i like the music
2) the "Return to Town" button is in a different spot on each window. this is NOT good design, and is really annoying too.

I happened to catch this when it was released and enjoyed it. A couple comments; a) Play with the debt on (the author allows people to choose one or the other, but the debt on gives great rewards when complete). b) If you find a level too hard, just repeat some of the previous ones. A good (quick IMO) way to grind is to choose a level w/ 3 enemies and get 100 treasure with each one. c) Death or loss is irrelevant, you'll still get treasure to sell. You can also surrender and you'll go back with all the treasure you've gained. The last screen of a level does not show all the treasure you've found, just the ones from the "boss" of that level (at least thats how it appeared in my usage) d) Strategically using your spells from the spellbook can make or break a level e) Always check for things you can consume, thats good HP right there. e) Remember to put decorations in your shop for more sales.

An amusing game to pass the time. Hopefully that was helpful to someone :-)

Seems, well, kinda buggy. A lot of the enemy abilities don't seem to work correctly, and during the puzzle game I'm seeing an *awful* lot of memory being allocated in firefox. (probably a memory leak?)

Even with these flaws, it's still pretty playable, but, this feels like a game that got next to no testing / polish, and could probably have stood just a bit more balancing. A real shame.

Hard to believe that this was made by the same guy who made all those spiffy "protector" games.

I thought this game was very good, much better than its current 3.4/5 rating. The spells and enemies broke up the monotony of playing match-3 (hardly the most intellectually stimulating puzzle, sorry match-3 fans!).

1. No clear explanation of how the Loot table works: to get the best item of the four (and the three lesser ones at the same time) you have to 'earn' 100 treasure points, which are on top of any treasure points that your enemies already start with. For example, in an adventure with a single enemy starting at 40 chests, you need to end the adventure with at least 140 chests before you kill the enemy.
2. No bonuses for clearing more than 3 blocks that are not in a single line (e.g. L-shaped and T-shaped clearances). This feels counter-intuitive.
3. After playing a few levels, my computer starts to lag - makes me suspect something odd happening with memory leakage. Refreshing temporarily solves the problem.

Boy, there isn't much of a reward for playing through this one. Collected all the treasures, beat all the adventures, and nothing. No ending screen, no fade to black, no father coming home, nothing. They really could have done a bit more here.

Also, the balance and bugginess just gets worse as you near the end of the game. The last four spells are laughably overpowered, and about three quarters of the way though, it starts giving out "dirty coal" instead of random armors and treasure.

This game needs some more love from its creator.

Explanation of how treasure works (at least my understanding):

There's two types of treasure, the loot you win from each enemy, and the up to 4 pieces of treasure you win at the end of a level.

For the end of level treasure, it's based on how many TOTAL treasure pieces you match, across ALL enemies. So, if your on a level with five enemies, you could match 20 pieces on each enemy, bringing you to 100 total, meaning you'll get all four pieces of treasure at the end.

This shouldn't work nearly as well as it does. Match-3 is fine for what it is, but not much more, and there's a bunch of not-real-well-explained stuff, and yet I'm drawn back.

Despite the flaws already pointed out above, and the fact that there seems to be no way to cancel casting a spell - which, come to think of it, isn't actually all that strange, imagine some mage standing on the battlefield halfway through the first words of a fireball spell when realizing the entire cavalry is blocking a clear shot at the enemy troops: "Alakazzzzoooooooh bother..." - but I digress.

Despite this the game's a nice break, not too difficult, not too easy. Plus I'm a sucker for upgrades. Keep em coming!

On Wednesday's I go shopping, and have buttered scones for tea.

Found an interesting strategy... Once you get ice storm and fire storm, load up your active spells with things that get rid of a bunch of tiles (like eternal rage, wealth, fool's gold, etc.), and spend your time doing those and finding four/five-ers. You keep damaging with the storms/rage, constantly have full mana, and usually get about five-to-six turns per turn of the opponent.

I really like undefined's games in general. But, as a developer, they're incredibly frustrating.

They seem to have a real knack for putting together games that are really fun to play and have real longevity. But... each and every game they make lately seems to get abandoned after a few days, generally still in need of bugfixes and major polishing.

They then proceed to make a brand new game, and let *it* wither on the vine, too.

I really wish they'd focus a bit more on one or two games that reach their full potential, rather than spreading themselves this thin.

the game is trivial. You just keep alternating between the storms and casting midas touch/eternal rage every once in a while. You don't even need to attack if you don't want.