Empires and Dungeons is a downloadable fantasy/strategy game for Windows created by Niels Bauer Games. It's been receiving a lot of praise for its stripped-down mechanics and surprisingly captivating gameplay. Taking on the role of a medieval emperor, you must gather resources to help build an army, both to attack your rivals and to defend your castle. Along the way you'll venture into deep dungeons, meet mysterious traders, pillage in the name of the empire and much, much more. Empires and Dungeons successfully pulls some of the best aspects from several rather complex genres and distills it into something every gamer can enjoy. 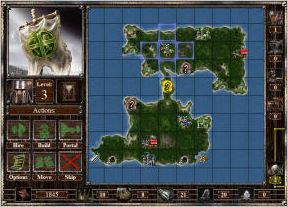 Simple graphics and simple point-and-click gameplay, Empires and Dungeons is reminiscent of the classic days of computer gaming. You begin on the overworld map and explore by clicking adjacent grid squares. Icons will randomly appear on the screen signifying resources you can acquire or other events you can investigate. Your overarching goal is to gather gold and materials to build structures, hire an army, and defeat your rivals. However, each scenario drops a new obstacle in your path to glorious victory, requiring you to complete a few tasks or seek impossible treasures to reach your goal.

Much of your time will be spent crawling through caverns in the combat portion of the game. Randomly generated dungeons appear on the map, giving you the option to enter in search of gold, treasure, and battle. Defeating foes earns you respect in the eyes of your army which ultimately allows you to construct more complex buildings and hire better fighters. The gold you gather here is also important, making dungeon battles a central focus of the game.

Even with all the things to explore and do, Empires and Dungeons suffers from a bit of gameplay redundancy. Fantastic surprises don't happen every few minutes, leaving you to deal with the mundane a bit too often. There's also a lot of text that isn't necessary after you read it once, yet it still pops on screen, hampering the action and forcing you to close the window before continuing.

Although it's designed for the casual gamer in mind, Empires and Dungeons has enough content to satisfy seasoned strategy/RPG gamers. The interface is straightforward, but there's also a thorough tutorial available and help is always a mouse-click away.

Empires and Dungeons does a great job of culling the most riveting and entertaining aspects of fantasy role-playing and strategy games and compiling them into a single title. Give the demo a try and see if it's your cup of tea. If you enjoy it, the full version opens a whole new realm of possibilities, giving you a dozen different scenarios, new items, monsters, even the ability to breed dragons. Moreover, should you decide to purchase the full version, your purchase will help support this site.

Unfortunately, the free demo is for Windows only.

Hmm, I see that. Perhaps it was wishful thinking on John's part? Never the less, I've changed the review to indicate it's for Windows only.

Interesting! I swear I checked before adding it and saw all three listed in the dropdown menu. Maybe I was looking at the wrong game? Sorry everybody! I'll go hide in the corner now...

PS: this site gets better every day, you're doing an amazing job guys :)

Cheers, Cristian! We generally mention the name of the developer, and will also include a link to their site if it's not a sponsored review as is the case with Empires and Dungeons. The developer's name is Niels Bauer Games. We won't get credit for the sale, however, if the game is downloaded directly from the developer's site instead.

Nice, this is a rather pleasantly addictive game, and that tutorial is fantastic; it holds your hand a bit tight but it's nice to know you won't fall anywhere. Biggest issue I have is that the sounds are somewhat unremarkable at best and gratingly repetitive at worst (the scoundrel and ambient effects are all right, but the *monster* effects made me turn down the sound when I couldn't auditorially figure out the difference between a rat and a scorpion). Turning down the volume isn't so much of an issue since the music is sort of unremarkable too, but I'd rather have appealing sounds and music than silence. I think I'll still buy it, though, as long as the price isn't too high.

If you get an error when running Empires & Dungeons saying "Cannot determine the device type from the given filename extension", then you may have some audio file types associated with WinAmp or a similar program. Run Windows Media Player and in WMP: Tools > Options > File Types > Select All > Apply > OK and exit from WMP. This change may adversely affect WinAmp.

Hmm, here's a question for Jay; not about the game itself, but the sponsorship deal... If I go for the "two games for the price of one and a half" deal, do you still get your fair share of the proceeds, or do you not get anything? Because I.. er, got sucked into Tradewinds and wished to continue the gaming.

John259 thanks for the tip on the error message I was just about to ask about that very thing. Can't wait to try out the game now that it works!

I think it's a nice little game, although it does not feel different from everything else I've played in the segment of turn-based medieval fantasy.
Desipite of that, when the demo was over, I WAS craving for more. Too bad it's not free, cause I'm broke right now. Cheers!

John259 - I found the exact same problem. What's worse, the problem is documented in the game developer's forums in 2003! I know of no other game that demands you cease using your preferred media player... and for the developer to allow this to continue for three years is unconscionable.

Here's a hint: the who download games often have *other* programs they use more than your game. In the case of media players, perhaps all work day. Your game is *not* going to win a contest between desktop usability.

Just started playing, wondered if anyone could give me some advice. I seem to be stuck on level 8 - my level-up gauge has been fully gold for several battles now and it's just not going up to level 9 - is there another step I need to take before I can level up any more?

I spent $20 on the game. It was alot of fun at first and then after the 2nd-3rd dungeon it got insanely repitios to play and win. There was virtually no strategy involved, except moving around the board to get as many dungeons as possable.

And another loss goes to making a game with no ending. Can't believe i tossed up $20 for something with no ending and exact same game every level. This game had alot of potential.. maybe they will spend more time and effort into making it a "strategy" game not a click here die game.

Good start atleast guys, but back to the drawing boards.

Is anyone else having this problem?:

I'm playing the tutorial. I get the rusty dagger they give me. it says to keep it for myself. okay then. so i do. now what? "replace" is ghosted. so all i can click is back. i tried selling it, but it won't let me because the tutorial says no. so i click "keep for self." and on and on and on.

in the tutorial you have no options but to do what it says. When you play the game for real you can do more. Also level eight is the most you can go to until you play god like. The thing is you have to play godlike early to open up all the adventures

I cant take the rusty dagger either, it wont let me select "Replace" when I use the tutorial or regular gameplay. Theres nothig else for me to click!

I have the same issue when finding treasure. It looks like an interesting game but the only thing I can do is Sell items when I find stuff!

I'm also having issues with being able to keep items I find. I did the tutorial to find out how but I was stuck at the same place. Anyone ever get info on that?

I tried playing the demo for a few minutes, got sick of the poor English (learn to use possessives, people! Get someone to proofread your text!) and uninstalled. I was also appalled that the game went fullscreen, then gave me a tiny window on my 1680x1050 LCD. I guess, from the comments above, the rest of the game is just as poorly done.

I guess the problem with trying to keep the items is only on Vista, as it doesn't work on Vista but is fine on XP.

For those not being able to keep items when using Vista, have you tried running it in compatibility mode?

I have the same problem as you guys. I cannot equip items, I can only sell them. there is clearly an issue of buttons missing in the window that should enable you to equip the item. This is obviously a Windows Vista compatibility issue.

I tried every combination of options in Compatibility Mode and nothing worked. So I paid money for the full version of the game and I can't play it. What a rip off. The developer really needs to go in and fix it or take the piece of crap off the market.

I have the same problem, i want to keep the objects, and nothing, so, what i can do? I first think that was because of Demo, but it isnt that.

You can only replace weapons with weapons and potions with potions etc.