Empress of the Deep 2:
Song of the Blue Whale

Empress of the Deep 2: Song of the Blue Whale is a brand new adventure game from Silverback Productions, creator of the original Empress of the Deep game. The sequel picks up where the first game left off, dropping you in a lushly-rendered world filled with mythological entities, puzzling pieces of machinery, and just a dab or two of fantasy magic. 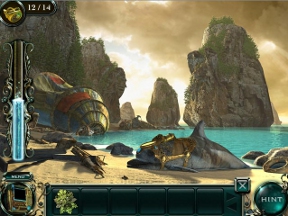 After more than a century of being trapped in a crypt below the waves, Anna has finally awoken. Her memory is, to put it lightly, spotty, but something about her twin sister Pandora discovering she wasn't the true empress and attempting to destroy both herself and Anna rings a bell. You barely escaped a watery death, and climbing out of the tomb on the salty sea shore, you quickly learn you must travel to the Temple of the Clouds and restore the Elemental Sources. But first things first: time to repair your balloon!

Just like its predecessor, Empress of the Deep 2 is built around a solid casual adventure game core littered with hidden object scenes, puzzles, mini-games, and a few inventory items to discover. Everything is mouse-driven, right down to the journal that helps you keep track of locations, important items, and the story as it unfolds. It's finely-tuned to guide you on your quest without holding your hand, allowing you the freedom to explore without the dangers of getting lost or frustrated.

Once you're in the Temple of the Clouds, Empress of the Deep 2 streamlines itself into four main zones, each accessible by gaining the appropriate medallion. You'll have to do some mild backtracking to solve many of these puzzles, but the game's hint system is generous and intelligent, always pointing you exactly where you need to go. And besides, with cursor changes, "area clear" signs, and sparkling points all over the screen, you aren't likely to lose your way any time soon. 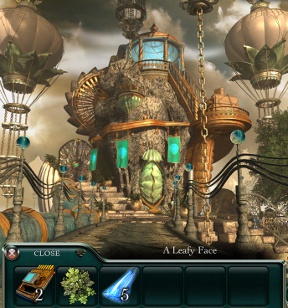 Analysis: Empress of the Deep 2: Song of the Blue Whale continues right where the first game left off, picking up both the storyline and the gameplay set-up. More of the same is definitely a good thing, especially seeing how the series is so young and crafted with such care. It's one of those games that grabs you right from the start. And, fortunately, there's enough content and smartly-built gameplay to keep you enthusiastically solving puzzles all the way to the end.

By far the strongest part of Empress of the Deep 2 is its storytelling ability. Combining a playful but detailed art style with a mythical story is always a recipe for win, but it's especially poignant when coupled with hidden object gameplay. Too often studios attempt to write a serious, true-to-life story and pair it with a casual game. What do you end up with? Adventurous uncles, missing family members, headstrong teenage detectives, and that whole lot. Here, under the cloak of myth, Empress of the Deep 2 is free to spin whatever tale it pleases. No matter what happens, you're interested because you know it's a story. And a good one, at that!

As far as length is concerned, expect between three and fours hours with Empress of the Deep 2: Song of the Blue Whale. The difficulty never really sets in, so you won't be stuck looking for one item or one button you missed three screens back (especially with the in-game strategy guide included with the Collector's Edition). Instead, you'll move from location to location, gathering items and solving puzzles with pleasant, relative ease.

Empress of the Deep 2: Song of the Blue Whale hits all of the high points for a casual adventure game, sprinkling just the right amount of hidden object scenes and tricky puzzles to provide a varied and engaging gaming experience.

A Collector's Edition is also available. It contains exclusive hidden object scenes, a gem-matching mini-game you can play to compete for trophies and top scores, an in-game strategy guide, and more. Remember that Big Fish Game Club Members pay only $13.99 for Collector's Editions (or 2 club credits), and collector's editions count 3 card punches of 6 total needed for a free game.

Aw, the demo cut me off when I still had half an hour left... Well, I had largely positive first impressions, but this game suffers from a common flaw of the genre. The HO scenes were beautifully drawn, but I am so tired of games making me look for ridiculous and irrelevant items. If I'm a magic-weilding empress, why do I need to find a waterlogged canoe, a birch log, and a baby squirrel to get a mechanism off an otter's head? (Smack it off with the log and row into the sunset with my 2 new cuddly companions?) It absolutely kills immersion and severely detracts from my enjoyment. This is especially true when a game has such good storytelling.

I don't mean to nitpick what was otherwise a solid game, but it's such a peeve when hidden object scenes are treated like an inventory filler from a page out of I-Spy, and not as an integral addition to the gameplay or a congrous part of the plot. There are plenty of games that have done it right, but Empress of the Deep 2 falls into the large list of ones that miss the mark.

I love this casual adventure game. I like the object scenes the puzzles the mini-games and the inventory items.

I think the previous title was better. That's my opinion.

As far as I can tell, the hidden object parts of the game are there to stop you finishing it too quickly, and pad it out to make it seem worthwhile.

I paid for the previous game in this series and without the hidden object stages I could have finished the entire game in an hour. And an adventure game you can finish in an hour just doesn't seem worth the rather expensive US$24 / EUR18 Big Fish pretend to charge for this one.

The problem with these games used to be they needed a lot of disk space and download time. These days when everyone has huge hard disks and fast network connections, an adventure game company has to do something to make its products last a long time. Since Silverback wants to keep the puzzles easy so kids stand a chance of completing the game, it has to do something else to stop you whizzing through the whole thing.

Looks like fun, but before I play it, can someone tell me what the yellow content rating is for? I appreciate Jay's warning for Upgrade Complete 2, so that's what I'm asking for here.

The yellow rating, in this case, just refers to the overall grown-up nature of the story and setting. I, personally, found nothing objectionable in it, but it's not designed for kids in mind, so some parents appreciate knowing that.

keno: The background story of this game (clearly described during gameplay) includes two cases of murder. It may be that this is what caused the rating. However there's no murder on camera.

By the way, to add to my earlier comments on how long the game lasts, for a smart adult there's about four hours of gameplay there, but the very end of the collector's edition includes an open-ended game -- think of something like tetris. And it's actually not a bad game. I've never seen it before but I've figured out a couple of pieces of strategy and improved my score.

Without that end game -- in other words, if you buy the basic instead of the collector's edition -- I'm not sure the game is worth the money.