An early hit in the iTunes App Store, Enigmo and its sequel Enigmo 2 appeared for iOS devices back in 2009, itself based on a downloadable version for both Mac and Windows operating systems. Now, much to the delight of mobile device-owning physics puzzle fans, Enigmo has branched out to include more platforms. Get your tablets ready! 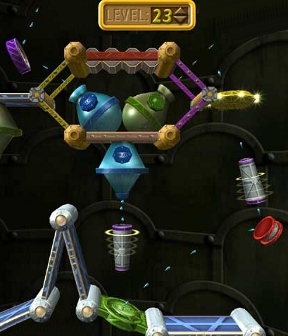 Enigmo is built around a simple idea: get water droplets from one place to another. You do this by placing and manipulating certain tools, similar to games like The Incredible Machine or Armadillo Run. Buckets, conveyors, trampolines... the gadgets at your disposal are a bit wacky, but they certainly get the job done. Place objects on the screen and rotate them using the touch screen. Then, once everything is set, watch the water bounce to the goal. A winner is you!

Enigmo works very well on larger-screened devices, and naturally the touch controls are just as intuitive (if not more fulfilling) than a mouse-based scheme. The visuals are starting to look a little dated, however, and a good HD reboot would be a great idea for the series. Still, standard definition graphics have never ruined a good game, and Enigmo is exactly that. One of the classic physics puzzle games that deserves a spot on any mobile device you own!

NOTE: This game was played and reviewed on an iPod Touch. Game was available in the North American market at the time of publication, but may not be available in other territories. Please see individual app market pages for purchasing info.

Starting from the top:

Place a down-pointing triangle girder to avoid hitting the sponges as the fire bounces down.

Starting from the top:

Place a down-pointing triangle girder to avoid hitting the sponges as the fire bounces down.