Escape from the Scenic Room

You're in a room with a beautiful view of the horizon. An Escape from the Scenic Room might be the last thing you're interested in doing, but in Tesshi-e's latest escape game of the same name, that's exactly what you're tasked with. Hey, we've all got to go to the bathroom at one point or another, right? After changing the Language setting from Japanese to English and sitting through the introduction, you're good to go. Navigate around the room by clicking on the shaded bars, collect inventory items for examination and use, solve every puzzle in the room, and eventually get out with one of two endings... depending on whether or not you found the Happy Coin, of course. 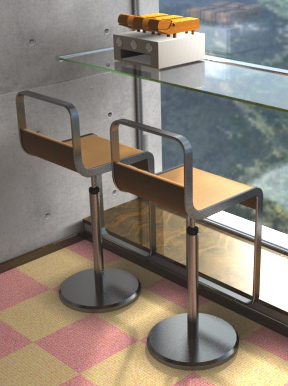 Like Escape from the Quiet Room and many before it, Scenic Room is as well done as a burnt hamburger. The bouncy accordion music somehow fits the atmosphere quite well, the visuals are realistic but not overwhelmingly so, and the puzzles are well-designed and flow perfectly. Some puzzles are old standbys (seriously, how do those pictures detect what corners you're handling?), some are new, and some are older than escape gaming itself. Just remember that 1 mL of water weighs 1 gram and you'll be fine. It all adds up to an excellent escaper that's well worth your time. Go and escape... or just sit for a while and admire the scene out the window... that works too.

Play Escape from the Scenic Room

Escape from the Scenic Room Walkthrough

Escape from the Scenic Room Walkthrough

So it's continuously clicking it. I could not figure out that chair mechanism. Rather unfair pixel hunting when you're up the wall. And why couldn't I put the 600 ml cup inside the 1000 ml cup, and drop the clay into the 600? Putting 100 in the 1000 ml cup? Yes, I want the water to overflow...

I liked the second part of the chair, that was original.

Thanks muchly for the walkthrough!

I'm not usually this clueless in a Tesshi-e game. I had to consult the walkthrough at multiple points, and was still puzzled about why the next step was what it said. But the fault may lie at least partly with me, because

I spent an inordinate amount of time wondering where the 700ml number came from, even though I had looked at the scale multiple times.

I agree that the mechanic with the

was really not obvious, and was perhaps what started me off on the wrong foot with this game.

This one clicked for me and I managed both the normal and happy coin endings without much drama.

Need to start rating Tesshi-e escapes on their food rewards! (I preferred the yummy chicken dish to the cake)

I particularly liked this one. The music was more interesting than usual, too.

Out + happy coin..
Tesshi-e at is usual logical and original.

I never play a Tesshi-e game without a walkthrough. I am just not that mathematical.

PS: I wish Tesshi-e would do another game like the early ones, where you have to combine items unusually (e.g., tape, drinking straws, etc. to make a little car)!

Have to assume this is VERY buggy as I wasn't even able to START playing it.

I enjoyed this one, except I got a bit annoyed with the

700ml water puzzle, since in real life you could just pour out a little bit of water at a time from the big cup, until you get to 700ml. Having to relocate clay and pour between cups was quite ridiculous.

I really liked the

that was very clever.

Headroom - Heading to Paris Friday. I've been watching your weather reports closely. Thanks!

Haha! Out, with happy coin escape, with no walkthrough! Victory lap!

Once I was childish enough to get past the first hump, it was pretty straight sailing.

If Tesshi-e decided to market wooden Mr Hippos, I think a lot of people would enjoy having him on an office shelf. Next to the pleasant indoor plant.

Out! I love that all of Tesshi-e's escapes end with refreshments, too.

Everything was going along fine until the chair. That puzzle is really unfair I think. Then again the navigation around the Mr. Birdy area is poor. I wish I could rate this game higher since I normally love Tesshi-e games, but this one misses the mark.

Can anyone PLEASE tell me how the water puzzle works, according to the walkthrough.
I don't know what I'm missing, but it makes no sense to me what-so-ever. =(