Escape into the Open-Air Hot Spring 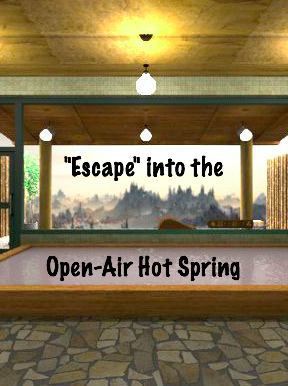 No matter what time of year it is, unless you're baking in the sun you'll probably appreciate a little exotic getaway and a rush of soothing warmth... especially if you happen to be playing this in the winter. (Those of you south of the equator, shush for now; we'll acknowledge you some other time.) That's why Tesshi-e has given us a rather thankful escape known as Escape into the Open-Air Hot Spring.

Tesshi-e's latest stars a protagonist taking a much-needed vacation to the titular open-air hot spring, only getting into it isn't so easy; a number of puzzles to solve and inventory items to pick up and use lie in wait before the customer can warm their body properly. You know what to do if you've played Tesshi-e's games before: navigate by pointing and clicking, and pick up items that seem useful. Highlight an item then use it on the environment, or on the "About Item" button for a close-up.

This game doesn't break Tesshi-e's streak of good escape games; the puzzles are fairly logical and make sense without being too easy, the controls are just fine, pixel-hunting is nonexistent (as is a changing cursor, but who needs it?) and there's a save feature for when you want to take a break from your break. (I will not make a "yo dawg" joke. I will not.) It's pretty clear that an "Escape" into the Open-Air Hot Spring is a good way to escape the winter blues, if only imaginarily. So I won't get in your way any longer...

Hmmm. I have a capsule, spade key, and a screwdriver. I've used both the key and screw driver, but cannot figure out the clue for the capsule.

3-number code required, an upside down heart, with the word sauna written next to it. I assume it has something to do with the thermometer in the sauna, and the number 9 from the heart bucket, but I don't know how to work it out.

You have the code right.

The heart is upside down ;-)

I think you're over-thinking it!

What's different about the heart and how might that apply to the code?

Stuck on the Mr. Birdy device.

Oops. I forgot to sign in, so previous comments were held.

Figured out where the valve went, and got out.

Not too hard, but a bit challenging at times.

fruitysheep, I just kept trying combinations until it worked. If you can't get it it's

Went back to play again to look for the Happy Coin. I assume there is one.

Still haven't used the ladle, and have a code of

Oh, the ladle is used

Still not sure what to do with the

code from the door. Tried changing the birdy positions, tried using numbers in reference on the capsule. Think I'm done on this one..close enough for me :)

a green ball, a lever, and a screwdriver.

What I can't figure out is

how to look at the buckets without filling them with water. The text is not very helpful.

There's a clue for the buckets on the far side of the pool.

I haven't found the happy coin either! :(

Turn all the Mr. Birdy's facing south and you can lift the case off the middle one, then lift up the Mr. Birdy to find the coin.

don't be mislead, SSS is useful

Oy vey! I got out without saving, so I have to start again to get the Happy Coin, and I can't remember how I got that first key!

augh stuck from the start. I have a screwdriver and a ball. Where is this spade key you speak of?

I find myself getting very impatient with this game, sitting in my chilly den. I want to go back to an onsen. Aaah.

Help - stuck at the beginning.

I have screwdriver and ball

Out without any hint, with happy coin. Great game!

I wish I were in a real hot spring. It's two degrees outside where I am.

Not too tricky, and no weird things to build - actually I think the difficulty level matches the environment well!

(lookng forward to sauna tomorrow... they say it will be -2 oC)

This is one of the most satisfying escape games ever. No clicking around looking for hidden spots or different angles, every solution is well hinted. You need just one hint to solve it: if what you see is remarkable, it's remarkable for a reason.

I think this is the first escape game I ever came across that would actually make sense in an offline version. Well, if offline escape rooms would make any sense at all.