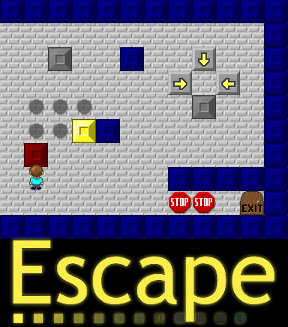 Escape. It's a word that quickly and efficiently describes the basic goal of so many games. Escape the enemy, escape the room, escape the time limit. For Tom 7, it's an entertaining, Adventures of Lolo/Chip's Challenge inspired game. There's no background given, no story you're playing out, it's just a pure and simple puzzle game. But it's not just the built-in levels that will have you scratching your head, it's the ease of creating and sharing your own (plus playing others') that can really challenge you.

Move the character around with the [arrow] keys, and activate switches by simply bumping into them. There are also a number of other objects to interact with, which you learn through the 22 tutorial levels. These are the levels that are actually part of the game and not considered 'user-made'. While they are labeled tutorial, don't think they'll all be a walk in the park. As you progress, they increase in difficulty to the point where the last few give you a good hearty challenge. Hearty like a stew except instead of filling your stomach, it fills your need to push blocks around.

Don't let the mere 22 levels deter you from trying this free game out. (Did I forget to mention that it's free?) Where you'll get the most bang out of the game is the over 2,000 user-made levels. While this feature in games can lead to a random mess of a list, each of these levels has been ranked using several different aspects such as difficulty and style. What really comes in handy is the sorting feature which not only includes the ranked characteristics but also allows you to sort alphabetically by author, title or on whether or not you've completed it. With all these easy-to-use abilities, it's hard to get lost in the swarm of levels.

While Escape might not be the prettiest game to look at, it's sure to offer you miles of fun. You can just play by yourself, going through the long list of offerings, or you can whip up a challenge of your own to share with the community. Be you a passive or active participant, you're sure to get hours of entertainment out of this game.