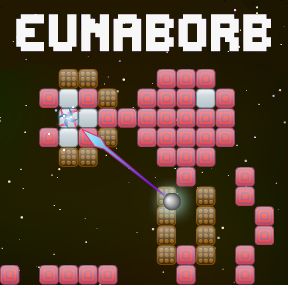 Even since Alan Shepard shagged a couple of balls on the surface of the moon, mini-golf and space have always been a tantalizing combination. Happily, Krang Games has gone ahead and brought it to browsers everywhere with Eunaborb, an arcade physics game wherein you duff your way through the universe and, by doing so, save it! Somehow!

Familiar to many previous golf games, with its "drag an arrow from the ball to determine its direction and speed" mechanic, Eunaborb has some interesting features, chief among them the ability to hit a ball again once it is in motion. Considering that a misplaced shot can send you hurtling into the infinite void, especially once the turbo-boosts and dropping tiles get involved, the chance for a mulligan is a good thing. Even if Eunaborb isn't quite the revolution that the developers seem to want it to be, it's still a lot of fun, and the large number of custom holes made with the comprehensive level editor will keep you playing as you sip that refreshing Arnold Palmer at your side. Fore!

Has telling us how many levels a game has in the review become forbidden for some reason? That's one of the key pieces of information that I always try to parse out of the 2-5 paragraphs of stuff I tend to skim at best.

It's more along the lines of "Well, there's 108 levels in the main game, but there's also an ever-growing collection of user-levels and the developer has mentioned further updates, so any number I give it probably going to be inaccurate by next week." :)

4,130 Views
5 Comments
chrpa— Jayisgames needs your help to continue providing quality content. Click for details Hello, the latest Weekday Escape is here! With Selfdefiant we briefly visit Arkansas and California, and with tomoLaSiDo their standard tiled apartment. Then comes very long and...  ...

Crafting and Scavenging Games Trending In 2021

866 Views
0 Comments
jayisgames.com— Crafting and scavenging have become a popular feature in video games for quite some time now, and most survival and role-playing games today include some form of crafting in their gameplay. Even though games such as Resident Evil and Survival...  ...

189 Views
0 Comments
jayisgames.com— Welcome to Larry The Unlucky Part 1 walkthrough! Larry has had terrible luck since he was born and you get to help him relive it....  ...

Views
0 Comments
jayisgames.com— Welcome to the Larry The Unlucky Part 2 walkthrough! Larry's life continues to be full of poor decisions and bad luck. And we'll be walking you through the first two chapters of his continued bad luck....  ...