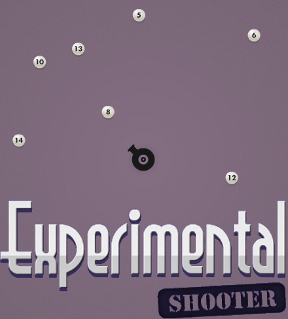 When playing a game like Asteroids, you imagine you're the spaceship, or a pilot on the ship... you are that object. But what if it talked to you as a separate entity? Not in an encouraging, "Great job! Keep it up! We can do it!" kind of way but more like, "Hey, that was a decent job, for a beginner." If that sounds like the type of interaction you want in a game, then Experimental Shooter is the one for you! As the name suggests, iLegendary has created a puzzle shooter that is far from normal, snarky cannon aside. Playing with just your mouse, you swing the barrel of the cannon around and shoot with the press of the left button. The rest of the rules are up to you to figure out, as each level contains a different set to follow to achieve the goal... keep your eyes peeled for clues and pay attention to detail; each level's title may hold the key.

I initially played the game muted, which turned out to be a big mistake. From the easy going elevator music of the menu to the funky, pop instrumental of the levels, which sounds like it was taken straight out of OMC's "How Bizarre", it's a great companion to the gameplay. At 21 levels, Experimental Shooter is the perfect length for a moderate challenge. If you find yourself stuck, then, as the game suggests, read the name of the level, unless you don't know what freeze tag is. Your little friend, the cannon, may even offer you a good balance to all the praise you hear throughout the day at school/work/home/etc. So get out there and start shooting... if you can figure out how.

Apparently I'm a person of exceptional talent and good looks.

Bug: when i finish level 8 exactly on time, it kinda glitches, said i finished it, yet puts up all the balls again like i would have lost.

I got to level 4 and told this game to burn in the 17th layer of the Abyss. Albeit in more simplistic and vehement terms.

I'm not getting the full game on Chrome running on Windows 7, just the upper left section... the armor games logo appears on the lower right section...

I get the whole thing if I play it on Armor Games.

This is a fun game, with some really good level designs. The only problem I had with it is that it was too easy- I blitzed through the entire thing in less than 20 minutes and I was using a trackpad.

I enjoyed this game. It's a fun to play, unique, interesting little gem of a game. My only complaint is that it was too easy. I was using a trackpad, and it only took me 20 minutes to get through the entire game. If this was lengthened, it would be a masterpiece.

5,445 Views
8 Comments
chrpa— Jayisgames needs your help to continue providing quality content. Click for details Your car needed an inspection and so you took it to Neat Escape's garage. They informed you that your car is ready, but when you get there, no...  ...

4,535 Views
0 Comments
chrpa— Jayisgames needs your help to continue providing quality content. Click for details Welcome to Weekday Puzzle! In Kultisti's platformer puzzler you are supposed to help to a little bird, in Magnific Studios' arcade it's a boy and his pet...  ...