Final Fantasy Tactics: The War of the Lions

A kingdom struggling to recover after a half century of war that leaves the very men and women who were its heroes no other recourse than a life of crime. Two lifelong friends whose paths are about to diverge in ways neither could imagine. In the iOS port of SquareEnix's epic turn-based strategic RPG adventure Final Fantasy Tactics: The War of the Lions, the beloved tactical fantasy game gets a touch-screen interface that keeps all the important things intact. Raise and train an army of wildly different heroes and jobs to tell the tale of Ramza through a series of challenging, engaging battles that will test your leadership abilities. And your finger-tapping precision. 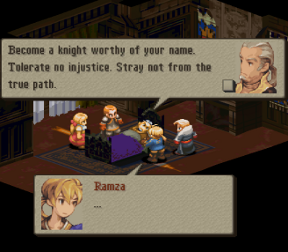 Chances are you already know all the nitty-gritty about the game, but here's a brief rundown. Rather than traveling around a world map and exploring towns manually (shaking down people's drawers and chatting with NPCs), you travel from point to point on a world map and all the story unfolds in cutscenes at each location. At its core, The War of the Lions is a game that focuses far more on combat when it comes to gameplay. You'll maneuver your soldiers one by one across a grid-like battlefield, positioning them to take advantage of enemy forces that are trying to do the same to you. Though each battle may have different conditions for victory or defeat, failure can come if your entire army is wiped out.. and since a soldier will vanish for good if you don't revive them within a set amount of turns, you don't want to slack off when it comes to your fallen. With battles that often seem tilted in the enemy's favour, areas that force you to use the terrain to your advantage, and soldier classes that will let you unleash powerful spells and abilities as you play, The War of the Lions still remains one of the finest, deepest role-playing tactical experiences you can have today. 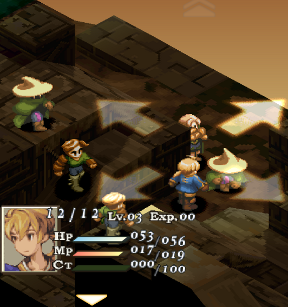 The most recent update of this iOS port was a pretty substantial one, most noticeably including new, sharper display and character sprites that look more smooth and modern. That's all well and good, provided you're not a graphics purist shrieking inside at those pudgy little sleek clay people, but... There's really no way to say this without sounding like an ungrateful schlub, but for all the touchscreen optimization work here, a simple onscreen D-pad probably would have been a lot smoother. Selecting individual items and tiles on the battlefield is frustratingly fiddly, and more often than not you'll wind up selecting every tile adjacent to rather than the one you want. Especially when the terrain is uneven. You have to get used to tilting, swinging, and otherwise angling the camera around at all times, which can be annoying. Isn't there a Moogle I can pay to do this for me? Several of them stacked atop each other could operate a camera, right?

These, however, are largely things you'll get used to if you have the patience to even play as heavy a game as this to begin with. Fussy user interface aside, there's a reason this game has endured for so long, and quibbles aside this iOS port keeps everything about it you loved intact. It's a massive game, with the sort of gameplay mechanics that are relatively easy to pick up but still make every battle a challenge simply because the game expects you to use your wits rather than simply grind numbers higher. Seated alongside that is a storyline that is a lot deeper and more intelligent than you might expect, with more emphasis on characters and political intrigue than magical flim-flammery. (Don't look at me like that. I love it too, but you know as well as I do Final Fantasy has never been what you'd call grounded.) The story here, for instance, is considerably heavier than the ones in the Fire Emblem series, or even Final Fantasy Tactics Advance. If you've been craving a complex narrative and difficult battles to match, do yourself a favour and find out why this game has been loved by so many over the years and systems it's been featured on. If you haven't played it in a while, despite a somewhat fudgy user interface (and some minor instability on a first generation iPad), this is still an extremely playable port you can lose yourself in all over again.

Final Fantasy Tactics: The War of the Lions for iPad
(iPad)