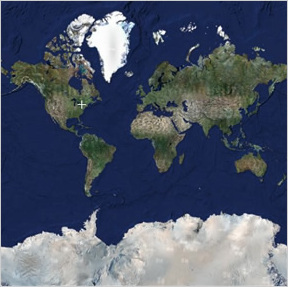 By now you've probably heard or read about Google Earth, the stunning new global charting and mapping application that Google launched last June. It allows virtually anyone with Web access to zoom in, out, and pan through any location on the planet using satellite image feeds. Well, not any location.

Since its release, security experts around the world have been terrified of the wealth of information the application grants access to, suggesting that its use could significantly compromise a nation's security. In fact, several countries have approached Google about limiting, blurring, or covering sensitive areas and government buildings from the Google Earth bird's eye view.

That being said, it's still cool as hell. But wait, there's more. =)

Today, Google officially released a version of the downloadable application for Mac OS X 10.4 and up; it was previously a PC-only product. And speaking of Macs, how about that brand-shiny-new, dual-core Intel MacBook Pro just announced today?! Woohoo!
...but I digress.

Yes, there is definitely a direction I am headed with all this: Flash programmer-extraordinaire, Paul Neave, has concocted a Flash version of the world sightseeing app, delivering its phenomenal cosmic power in an itty bitty living space. Um, that would be your browser. Flash Earth is Google Earth for the rest of us. Click.

For anyone interested in seeing my neck of the woods, which is presently Rochester Institute of Technology... click.

Where's your head at?

MUHAHAHA I KNOW WHERE YOU LIVE NOW JAY!!! im comin for ya if you post bad games...
which means you dont have anything to worry about!

Yeah, I've had Google Earth for a while now, and I tried to find the Whitehouse, and it might just be my own incompetence, but it was nowhere to be found! I've also noticed that Australia is covered in clouds or something. You'd think they'd be able to get a picture when there weren't any clouds over it!

yeh, i have that google earth thing downloaded on my computer. i can see my house on it!! thats actualy kinda scary . . .

Wow. this will be fun to play around with. :)

I hope i find a government building. xD

Wow, this is incredible! Here's where I live

hey, i can see my house from here!

That was really pretty cool. I was able to see my car in my parking lot!! Thanks for sharing!

Maybe it's just me, but every time I use these zoom-in-on-our-blue-planet programs, I feel nauseated...

This flash earth is nice, but its from early 2005. As I live in Philly and the new staduims are still being worked on. Nice, but google earth is better.

> Nice, but google earth is better.

Better for you; ok, but why? More recent satellite images?

They updated the pictures for Ã-resund since the last time I had a look :)

That's a big ol' Catholic church I dropped the thingie on, since my house is right near the fuzzy border!

One thing I like google earth (and now flash earth!) for is showing my foreign friends where, exactly, it is that I am. Many folks (even some Americans!) know New York and LA and then just have a fuzzy picture of the "vast middle" of the US, and a lot of people can't locate Chicago, let alone Peoria! So I can link people to Peoria and they can zoom out and be like, "oh, right, I've seen that state-shape on the map, I know where that is now."

Trying to convince them to VISIT me down here, rather than having me come up to meet them in Chicago - that's a tougher task!

I've noticed using some of these programs - other online ones with sattelite imagery - is that they do give an alarming amount of detail. On TerraServer, the pictures of my law school were taken when I was there, and I can locate not just my apartment complex but my actual CAR because the pictures are so high-resolution (not the plate, just the color and profile from above). When I look at my parents' house, you get a bird's-eye view of the construction they were having done at the time - you can literally almost read the logo on one of the construction truck's roofs. And since TerraServer lets you pull up addresses, it doesn't take much work to backwards engineer the address, pop it into the county assessor's website, and pull up a ridiculous amount of information on the house, including property taxes, current and prior owners, assessed value of the house, date of last assessment, date tax bills are mailed to that address! ... kinds of things that might be terribly useful to identity thieves. Or mail fraud types intercepting tax bills or payments. Or traditional thieves or scam artists narrowing down their target options with financial data. That's scary.

But it's still cool. And I guess I can rest assured that for some unexplained reason, all of the mapping programs (street maps and satellite maps) think I live three houses down and a block over. So nobody can ACTUALLY find me with these programs without my help!

(sorry, didn't mean to write a book there!)

Come and rob my house!

The last one has to be some sort of error or easter egg cause it looks like the inside of a computer.

Just look around some more in the area and you'll find lots more of interesting sights.

This is too cool. Google Earth never loaded right on my system, and this lets you zoom in much further than Google Maps. (I think I saw the Delphi region in Greece this time... it holds a personal interest.)

Since I mapped my house on the JayisGames Frappr, I'll show off something different here.

This is the setting for a novel I'm working on. The small hole center is a bottomless? hot spring near Meadow, Utah... if you zoom out and look a bit to the north, there is a big extinct? volcano. (Since the hot spring is hot--100 degrees F--the volcanic activity in the area isn't quite dead. Which works well for my story.) One part of the volcano is labeled "Tabernacle Hill", but the parts that erupted more recently (600-1000 years ago) wrap around it to the north. Cool stuff.

Btw, I once checked out Guantanamo Bay using Google Maps. I didn't see anything more than gigantic buildings and barges, but it did look like a nice tropical spot. Are they worried about virtual tourists?

thispost was also intended to see if my typekey is working.
Because the other times it didn't work and I don't want to keep jay from his work with my comments =p

I must be a little blonder today than usual, but I'm not sure how to locate my house. Any help? I'm at work and not allowed to download google earth. So I get to have no fun there.
Thanks for any info on how to use this flash earth thing.

im right here!! my house is the brown smudge!!!

This flash version has a major bug, if you're dragging and it starts loading images. Somehow you're moved miles away even if you only dragged a little bit. I was zoomed in near LA and suddenly found myself in South America... :s

Anyway, I wish we would get more imagery from Europe... As spectacular as the ones from the US. The really good ones are from a plane by the way, not from a satelite.

I think just the idea of being able to see the world on your computer makes Google Earth terribly addictive.
Fun fun.

Groningen, Netherlands, the place where I live!!! More you cannot see.... booohoooo

aaargh it doesn't work with the link.....sorry

My house
It looks like a pile of dirt!

Hello and welcome to jayisgames.com tech support. We'll go from the top up, shall we?

Abbey- Australia isn't covered in clouds for me. . .old version of Google Earth maybe? But it downloads the pictures fresh from the web. How odd. Also, the White House is visible. 1600 Pennsylvania Avenue NW, Washington DC, I think. And I'm Canadian and I didn't Google that, so you may want to check and also get the postal code.

Eyebrows- the reason it's off is because it knows the first and last number on the street, but not the middle ones and it assumes all houses are evenly spaced.

Webby- no idea about why it looks like a computer, but for how to make the links: at the bottom right, right above where it says the latitude and longitude, it also says "Link to This Location." Click it, and then copy the address from the address bar.

Heather- try finding it on Google Local, then zooming out on both Flash Earth and Google Local. Then just go back and forth until you find your house. As my luck would have it, I live here. Right at the top left of that cloud, darn it!

Evidently, I meant from the top down.

MSN Virtual Earth has a colour photo of the White House area, while Google Maps seems to have an identical photo but in grayscale. Very odd. Note the blurred out roof in both.

Only small bits of the Netherlands are visible.

Hmmm.... On Google Earth, my house is missing.

I wonder if somebody could make a message on the ground large enough to be seen?

Also, would it say, "ALIENS PLEASE TAKE ME WITH YOU"?

google earth and the version where u can see everything live from your home is slightly scary in a way. coz if you think about it, your privacy is totaly lost but this thing rocks!!! =D

hey... this thing is awesome!!
but did any of you guys check out the planetarium part?
that just took my breath away!
its beautiful... sometimes i wish we could see stars that clearly.

*does something random because he feeeeelz like he wantz to*